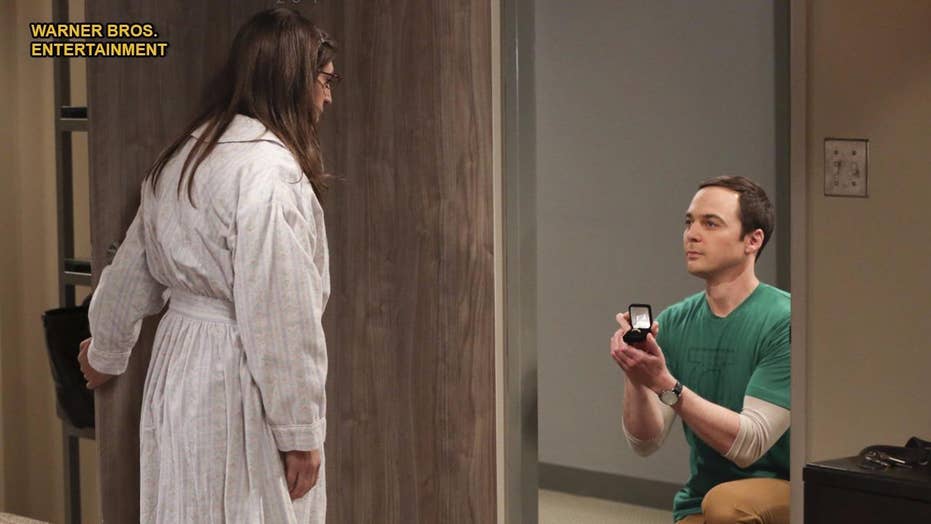 Fox411: A teaser for the new season of 'The Big Bang Theory' features a little glimpse into the resolution of Sheldon's now-infamous cliffhanger proposal from Season 10

At long last, we finally have the answers to the year’s biggest proposal. After Sheldon popped the question in the Season 10 finale, Season 11 picked up right where the big moment left off.

[Spoiler Alert: The remainder of this article will disuss Season 11, Episode 1 of "The Big Bang Theory"]

Unfortunately, when it comes to Sheldon and Amy, nothing is ever simple. Just before the question could be answered, Leonard calls and Sheldon is forced to pick up so as not to “be rude.” It turns out the gang noticed him go missing for several hours and he explains that his phone was on airplane mode. He also goes into great detail about what happened between him and Dr. Ramona Nowitzki. Fans will remember that she surprised him with a kiss, prompting him to trek all the way to New Jersey.

“In that moment I realized that Amy was the only other woman I wanted to kiss for the rest of my life,” he said on the phone in front of Amy. “So, I came to New Jersey to ask her to marry me.”

However, he said he needed one man’s opinion first. Apparently, before he left, Sheldon made a video call to… Stephen Hawking, who guest starred to give the couple his blessing. Of course, Sheldon called Amy’s father as well, but he explained his reasoning in typically curt fashion.

“Stephen Hawking is a genius. If he said ‘no,’ I wasn’t going to waste time on her father.”

Once he got off the phone, he immediately called Leonard and Amy back to reveal that, of course, Amy said “yes.”

If fans expected that to be the biggest shocker of the episode, they’d be wrong. When Howard gets the call to announce their engagement, it’s revealed that Bernadette is pregnant with their second child. However, considering how young their first is, she’s less-than-thrilled with the news. When she finally tells Howard, he panics and freaks out as well. Neither of them are having an easy time coping with the fact that they’re doubling down on child raising.

Leonard and Penny try to help them with dinner and a pep-talk, but it goes awry when Bernadette suggests that Penny get pregnant too. That way, they’d be going through it together. However, Leonard and Penny both balk at the idea.

Meanwhile, Amy brings Sheldon to meet some of her colleagues and is excited to introduce him as her fiance. Unfortunately, he ruins the good time by being unable to grasp the fact that, at this university, she’s the celebrity brain.

“It’s like having Optimus Prime at your table and not asking him to turn into a truck!” he says.

The two fight over his behavior, and he’s forced to rethink what life will be like married to Amy forever. Naturally he calls on his friend again for help. He video chats with Stephen Hawking from the bathroom of Amy’s hotel and laments how infuriating it is to be a world-class genius and only have people around you want to complain about their lives. Hawking does his best to point out the irony of the statement, but it takes Sheldon a shocking amount of time to put two-and-two together.

When he emerges, he apologizes for not supporting her.

“I know this isn’t easy,” she says. “But, you’ll have a lifetime to practice.”

With that, fences were mended and it was time for Sheldon to go back home.

The episode closes with Amy visiting Sheldon at his work. There, she sees Ramona and confronts her. Just when it looks like there’s about to be the fight of the century, Amy hugs Ramona and thanks her.