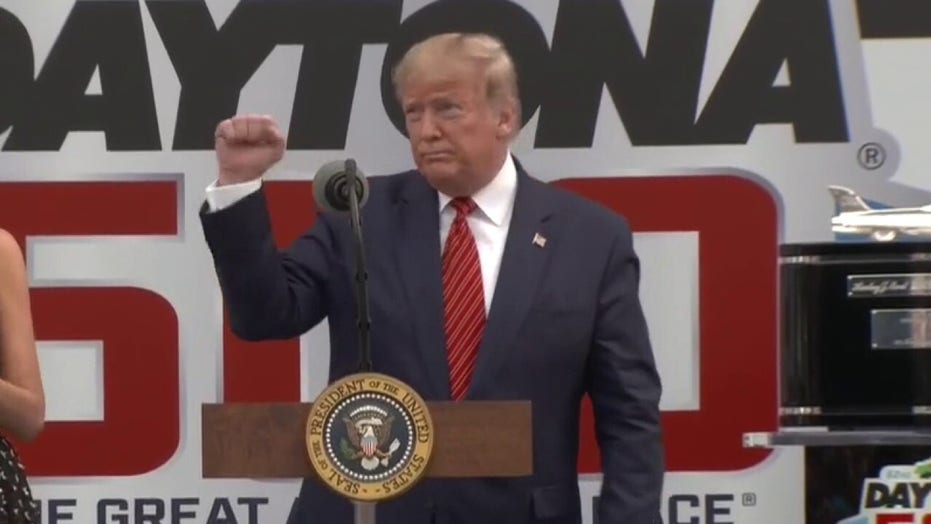 President Trump revved up NASCAR’s Daytona 500 on Sunday, becoming the second-ever president to deliver the Great American Race's iconic command, "Gentlemen, start your engines!" and the first of any president to take a lap in the armored presidential limo, dubbed "The Beast."

The race encountered rain delays soon after it got underway; officials ultimately postponed it to Monday.

Trump and first lady Melania Trump were met with chants of "four more years" ahead of the National Anthem. (AP Photo/Alex Brandon)

He called the tens of thousands of fans present at the racetrack "patriots," adding that "NASCAR fans never forget that no matter who wins the race, what matters most is God, family and country."

In an interview from the track, Trump told Fox Sports that while he's not able to drive his own car as president, he was tempted to get behind the wheel of one of the race cars.

"Right now, if I can, I'm gonna hop into one of these cars and I'm gonna get into this race, if possible," he joked.

Trump's motorcade passes the grandstands as he leads the drivers around the track before the NASCAR Daytona 500 auto race at Daytona International Speedway on Sunday. (AP Photo/Phelan M. Ebenhack)

Trump and Melania took a lap around the speedway in "The Beast" after giving the command for racers to start their engines. Leading the pack of 40 racers, the lap in the 22,000-pound, Cadillac-branded limousine marked a historic first for any president.

PRESIDENT TRUMP'S ARMORED LIMO, 'THE BEAST': WHAT TO KNOW

Trump is only the second sitting president to attend the 500, behind President George W. Bush who issued the famous command in 2004, the year Dale Earnhardt Jr. won his first 500. Earnhardt was on hand Sunday and waved the green flag as honorary starter.

His appearance follows in the footsteps of former President Ronald Reagan, who in 1984 became the first sitting president to attend a NASCAR race at the speedway when he started the Firecracker 400, giving the command, “Gentlemen, start your engines!” from aboard Air Force One.

It was at that race that Richard Petty captured his historic 200th victory. Reagan watched until the end, even doing a few laps of radio play-by-play during the race before he congratulated Petty and ate chicken with drivers, crew members, NASCAR employees and their families in the garage area.

Former President George H.W. Bush also visited the track at Daytona, but not during the 500 race.

A QUICK HISTORY OF THE DAYTONA 500

Democrat Bill Clinton attended a NASCAR race as a presidential candidate in September 1992, but many fans at the Southern 500 in Darlington, S.C., booed and heckled him over the question of his lack of Vietnam-era military service that stalked his campaign. 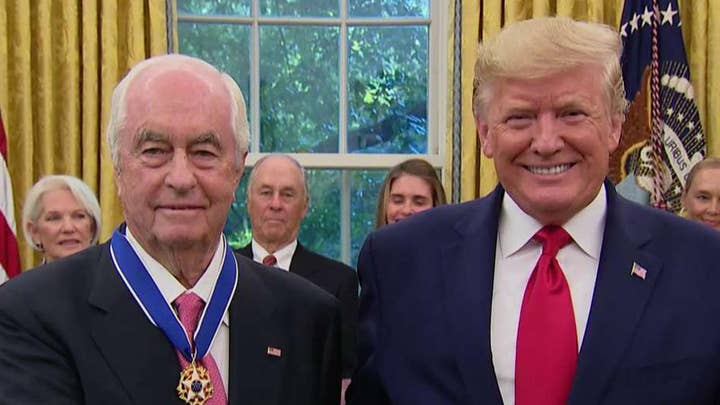 President Barack Obama’s initial presidential campaign was presented with the opportunity to sponsor a car in a NASCAR race, but eventually declined that chance. However, Obama routinely invited the winners of the NASCAR Cup Series championship to the White House, a tradition Trump has continued.

Drivers battle through 200 laps around the speedway in the 500-mile stock car race for a chance to lift the champion’s trophy on Victory Lane.

About 9 million people took in last year's race on television.