The tweel (a portmanteau of tire and wheel) has been a concept in the tire industry for some time now.

If you're not familiar with that term, it refers to an airless tire.

Michelin has been developing its tweel for over 10 years. Now the French tire giant is ready to bring this revolutionary roller to the market.

Michelin Tweel Technologies is the name of the division tasked with presenting this airless tire into the production space. Now, don't get excited and think you'll be slapping one on your car. These tires are intended for use on UTVs.

Those would be the side-by-sides currently taking over the powersports market. The tire itself is a 26-inch airless radial tire, and there's no need for any system to maintain air pressure. There is no air pressure.

You don't have to worry about getting a flat. The tweel is constructed with a spoke system that maintains the integrity of the tire. It can deform a bit to the terrain below, which also increases its off-road traction ability. That's why it should present a sweet off-road option for UTV lovers. But those lovers shouldn't be on a hunt for speed. The maximum speed rating for the Michelin tweel is just 37 mph.

Right now, Michelin has prepared its tweel to fit 4x137 and 4x156 bolt patterns. That applies to the Can-Am Defender, Kawasaki Mule, and the Polaris Ranger. Michelin is cooking up more hub configurations so John Deere, Honda, Kubota, and Argo owners can swap to the airless setup sometime in late 2018 or early 2019. But you best prepare your wallet. The UTV-spec tweels will run you $750 a corner.

Michelin isn't the first to market either. Polaris jumped ahead of the tweel revolution when it launched the Sportsman WV850 H.O. in 2013. This is an ATV fitted with a set of TerrarinArmor tires, which are a similar idea to Michelin's tweels.

Regardless of which set you choose, there's piece of mind in knowing that you don't have to worry about getting a flat while you're out on the trails. 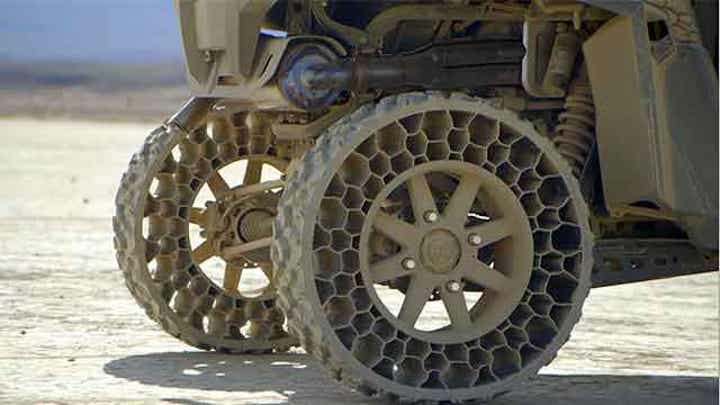