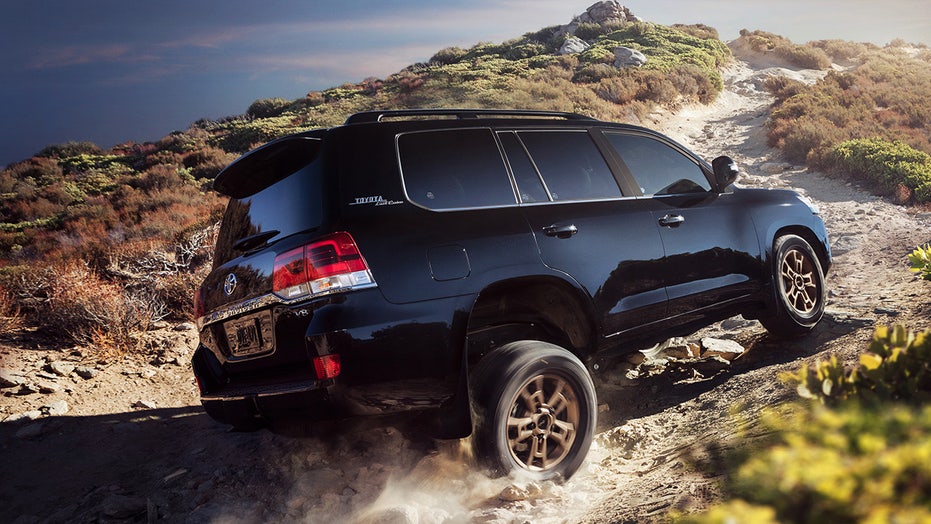 The Toyota 4Runner is the 'oldest' new midsize SUV you can buy, but it's learned a few new tricks to help it keep up with the times, Fox News Autos Editor Gary Gastelu reports.

The 2020 Toyota Land Cruiser Heritage Edition celebrates the nameplate’s six-decade history in the U.S., but it might as well be a tribute to itself.

The current-generation Land Cruiser was first launched in 2008, which ties it for the title of “oldest SUV design still on sale” with…the Toyota Sequoia.

Age does come with certain virtues, however, and the Land Cruiser's proven durability is highest among them. According to iseecars.com, it tops the charts among vehicles most likely to reach both 200,000 and 300,000 miles. Second on both? Yea, that’d be the Sequoia.

They’re far from the same truck, however. The Land Cruiser is made in Japan and sold globally, while the Indiana-built Sequoia is essentially a Tundra pickup with a cap and seating for up to eight that’s targeted straight at big Middle America families.

But, while the rest of the world gets workhorse versions of the Land Cruiser that are a common sight in underdeveloped regions, the U.S. model is more of an heirloom you’ll want to keep around to make sure you get all of your money’s worth.

The standard Land Cruiser currently lists for $86,740 and the Heritage Edition $89,070. Both versions are loaded, with the Heritage Edition adding cosmetic touches that include retro badges, bronze 18-inch BBS wheels and a Yakima roof basket. It also does without running boards and deletes the third row of seats to help you hearken back to the days when people bought big SUVs because they had to carry tons of stuff to far off places, not kids to soccer practice down the block.

That makes the Land Cruiser the priciest Toyota model and puts it on par with the more luxurious Lexus LX that shares its underpinnings and outsells it, because some people just can’t help showing off when they spend that much. The Land Cruiser is for a different market entirely. One that appreciates a quality vehicle, but doesn’t need attention or want to worry about babying it. It’s a small one that accounted for just 3,536 sales last year to the LX's 4,718.

The full-size, body-on-frame truck is a straightforward, but handsomely-styled SUV outside and in that offers a mix of premium and sturdy materials with the feel of fine-tuned precision machinery of Toyota legend. It comes equipped with an 381 hp 5.7-liter V8, 8-speed automatic transmission and standard 4x4 drivetrain complete with a solid rear axle, two-speed transfer case and more than a few tricks up its sleeve.

There’s a full-time all-wheel-drive setting that allows it to operate like any run of the mill crossover, but you can also lock it in four-wheel-drive and engage a low-speed cruise control Toyota calls CRAWL control, which operates at single-digit speeds for negotiating the roughest terrain. A Turn Assist feature uses the rear brakes to lock the wheels so they work like ski poles in this mode to help it pivot for much sharper turns on loose surfaces than a truck with a locked 4x4 system can typically manage.

A 360-degree camera system with inclinometer helps in tight confines, too.

The Land Cruiser only has 8.9 inches of ground clearance, but its suspension features hydraulically controlled stabilizer bars that make it loose and limber off road and keep it firm and stable on pavement, where it will tow up to 8,100 pounds.

On the latter, it’s as quiet as the bank vault if feels like when you shut the doors, even with its chunky tires and that roof rack cutting through the air. Despite its age, the Land Cruiser has been updated with high-tech driver aids like automatic emergency braking and radar cruise control that makes it a highway star.

The standard Land Cruiser comes with a third row of seats that fold down and flip to the side. (Toyota)

Along with an out of date infotainment system that’s lacking Apple CarPlay and Android Auto integration, one thing that remains very old-school about the Land Cruiser is teh V8’s fuel-economy, which is just 14 mpg combined. That ties it with the Sequoia for second worst among trucks behind only the 707 hp Jeep Grand Cherokee Trackhawk’s 13 mpg.

That over-the-top street Jeep is the epitome of what SUVs have become in recent years, while the Land Cruiser Heritage Edition represents what they originally were and, it its case, may always be.