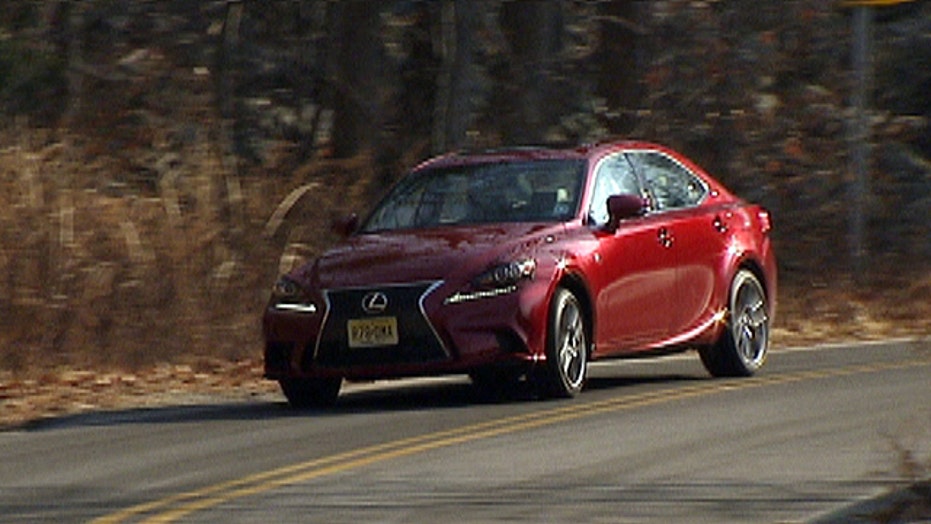 If the 2014 Lexus IS is anything, it is further evidence that the third time is the charm, which is always a good thing when your main competition in the is the BMW 3-Series.

While the past versions of the IS were good, the new third generation model throws down the gauntlet with the most convincing performance yet, wrapped beneath the eye-catching facade of an angry alien set on destroying humanity. Somehow, this is highly appealing.

As with the outgoing model, the IS comes in two versions: the four-cylinder IS250 and V6 IS350. Each can be had in rear or all-wheel-drive and fitted with an F-Sport performance and appearance package. Starting price is $36,860, but the options-heavy IS350 AWD F-Sport I tested rang up at $49,615.

That model is powered by a 306 hp V6 connected to a six-speed automatic transmission and adaptive suspension, while rear-wheel-drive IS350 F-Sports add an eight-speed transmission and optional variable ratio steering. Each comes with unique wheels, an aggressive body kit and deeply-bolstered, yet fantastically comfortable sport seats.

The cabin design is inspired by the one in the $375,000 Lexus LFA supercar from a couple of years back. It’s sharp and modern, finished with lots of black and chrome trim, and topped off with the LFA’s trick configurable instrument cluster, which has a floating tachometer bezel that slides back and forth over a flat-screen display in one of the best-ever examples of automotive theater.

The infotainment and navigation system is reasonably comprehensive, with smartphone-enabled features that include Pandora and Yelp integration as well as an e-mail reader, all operated via Lexus’ signature Remote Touch joystick equipped with haptic feedback that lets you “feel” the buttons on the screen. It’s sometimes great, sometimes infuriating, and overall no better or worse than many of the other interfaces out there.

More appealing interaction comes from an intake sound generator on F-Sport cars that pumps engine noise into the otherwise hushed cabin. It’s a rich, intoxicating rumble that encourages liberal application of the accelerator.

Do that and you may encounter the most un-Lexusy thing about the IS: a large hump on the driver’s side of the central tunnel by your right foot that accommodates some of the all-wheel-drive equipment. It’s odd, occasionally annoying, but can be utilized as a leg rest on long journeys.

It’s likely you’ll be inspired to take quite a few of those. Even with the F-Sport’s stiffened suspension and low-profile tires, the IS350 ain’t half bad to cruise around in, but being plush ain’t what it’s about. Along with the 3-Series, the IS has able sports sedans like the Cadillac ATS, Infiniti Q50, Mercedes-Benz C-Class and Audi A4 to contend with, or perhaps it’s the other way around.

There’s very little about the latest little Lexus that would cause you to shop around if you were inclined to buy one. Its tight chassis delivers polished handling that’s very satisfying on the right road, and easily among the best in the compact class. The size is right, and so is the price, undercutting many of those rivals when similarly equipped.

Where it fails to impress is on the fuel economy front. Its 21 mpg combined rating falls far short of the efficiency bar set by Lexus’ hybrid models, but the penance paid by them makes fun cars like this possible.

Nevertheless, while the third-generation IS350 may have a couple three faults, it certainly makes up for them with more than enough charm.