The “Rent-a-Racer” was a run of special edition cars built for Hertz by Carrol Shelby that were based on his high-performance Shelby GT350 version of the Ford Mustang.

Along with two prototypes, only 999 were made, and the vast majority of them were finished in Hertz’s signature black and gold color scheme, but a few were painted other colors.

Some were literally driven by renters from the agency to race tracks. They were eventually retired and resold for around two grand each, but took months to liquidate, because even a car like this one couldn’t shed that rental car stigma.

But as with all GT350s, the survivors are among the most highly sought-after Mustangs today and sell for prices ranging from $100,000 to $250,000, depending on their condition.

One that’s probably not worth that much right now, but could be, was recently found in a “little old lady’s garage,” where it was sitting for 30 years.

According to BarnFinds.com, the coupe appears to have been undergoing a restoration that was never completed. It has a red driver’s side door, and the taillights and rear bumper are removed. But most of its important components, including the 289 V8 engine, are still with it. It also looks like it has a four-speed manual transmission, which makes it one of the rarest of the rare if it’s original equipment. Only a handful of the GT350Hs came with one, the rest getting three-speed automatics.

CLICK HERE FOR MORE PHOTOS OF THE GT350H FROM BARNFINDS.COM

The man who found and purchased it hasn’t revealed how many miles it has on it, what he paid for it or even where it was as he considers his options moving forward. But as they say in the collector car world, “he knows what he’s got,” and that’s a little black and gold mine. 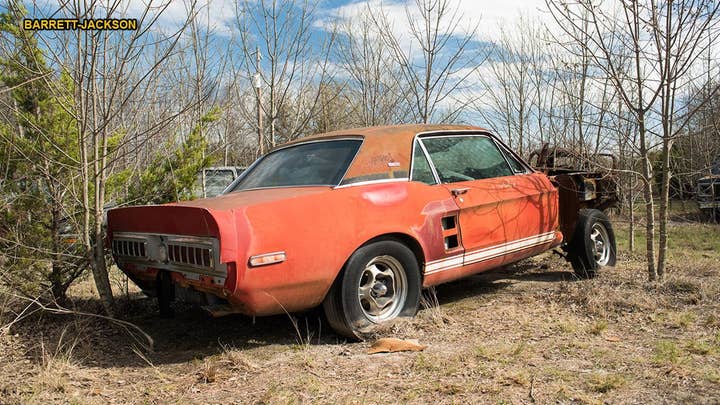