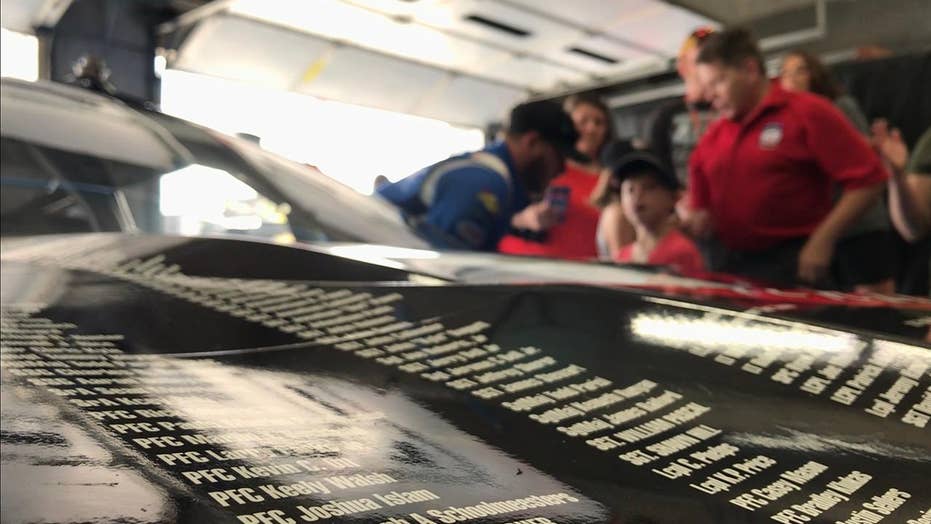 During the Memorial Day Weekend NASCAR driver Jeffrey Earnhardt, the grandson of the legendary Dale Earnhardt, honored fallen servicemembers in more ways than one.

“I don’t think I have ever had to hold back tears so hard in my life,” Earnhardt told Fox News on Saturday.

He surprised Stephanie Manis, a Gold Star mom and her two children, George (Gino) and Kayden, with her husband’s name proudly inscribed on the driver’s side door.

Jeffrey Earnhardy posing with Gino and Kayden Manis after revealing their father's name on his car. (Fox News)

“Overwhelmed. I definitely knew I was going to cry,” Manis told Fox News. “There’s just no words for it. I mean he was a huge NASCAR fan and it’s just a real honor for someone to honor him and other soldiers. But it was overwhelming. There’s really no words.”

“Being deployed I think he dealt with things that I didn’t understand and learning that after his death,” Manis said. “I mean things were really, really rough for him. I just don’t think he could handle all the pressure and it was just too much.”

Earnhardt said the tribute on his vehicle is the least he could do for what servicemembers do to protect the country.

“I could never pay enough respect,” Earnhardt told Fox News. “We owe them everything for what they have done. So, it’s very touching. It’s very eye-opening and it really hits home.”

Manis and Earnhardt weren’t the only ones choked up by the surprise. In addition, the names of 617 fallen men and women in uniform were inscribed on the hood of Earnhardt’s car.

“It was a great feeling! It made me very proud of him,” Briggs said.

Her husband not only loved NASCAR, but he also had a history with the company.

“My husband interned with NASCAR at Charlotte Speedway in 2009-2010 and worked at the Lowe's pit area,” Briggs said. “He went to the Charlotte NASCAR Institute and graduated with honors on the Dean's list!”

Briggs served in Afghanistan in 2013, but Miranda said he took his own life this past February, two weeks after she gave birth to their daughter Essex.

Briggs is a member of Nine Line and she says she’s proud her husband was too.

The money raised from the T-shirt sales goes to Angels of America’s Fallen, an organization that supports children of servicemembers who died during combat or suicide due to Post-Traumatic Stress Disorder -- kids like Gino, Kayden and Essex.

Jeffrey Earnhardt honored the fallen husband of Stephanie Manis by displaying the Army veteran's name on the driver's side door of his car. (Fox News)

The organization helps children deal with the grief of losing parents by paying for extracurricular activities until they turn 18.

“...we pay for the activities that already exists in their community that they pick as their personal outlet. So we have done things like surfing, baking lessons, swimming lessons... Taekwondo and martial arts,” Joe Lewis, CEO of Angels of America’s Fallen, told Fox News. “As long as it’s a fun event and it has a coach or instructor component to it, we are going to find a way to say yes.”

On Sunday, Earnhardt and Nine Line CEO Tyler Merritt, a retired Army captain, presented a check for $15,000 -- made possible by the T-shirt proceeds -- to Angels of America’s Fallen during NASCAR’s Coca Cola 600 at the Charlotte Motor Speedway.

“It brings awareness to the fact that there are thousands of children of our fallen that are out there trying to go through their childhood, the most crucial, formattable years without the support or guidance of their parent,” Lewis said. “It’s really important that as a nation we help those children mitigate the risks they face of increased anxiety, depressions, substance abuse, dropping out of school and even suicide.”

Manis’ children have been a part of the Angels of America's Fallen family since 2014 and Briggs is on the waiting list. She says the program would be instrumental to Essex’s growth.

“It’s going to give her an opportunity to have an outlet for her grief,” Briggs said. “Between sports, athletics, art or music whatever she chooses to do they are going to be able to financially help her do those things.”