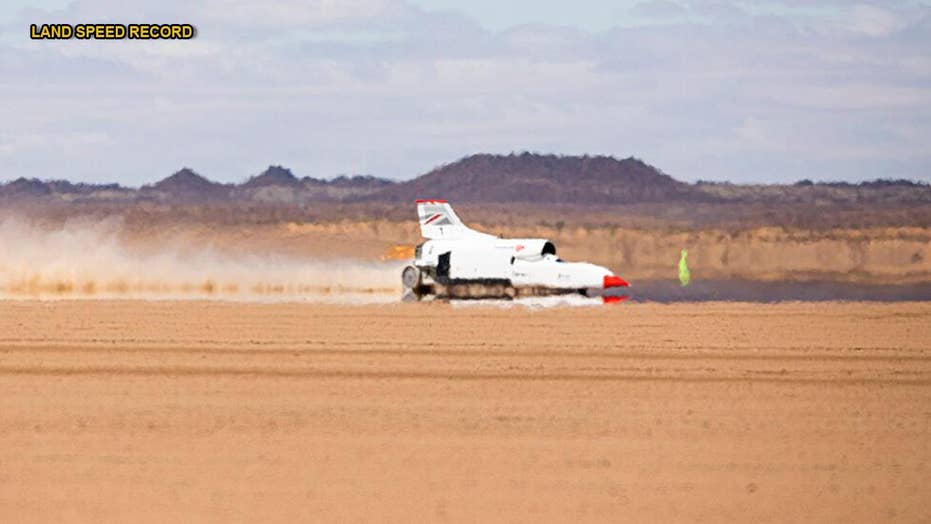 The Bloodhound LSR, a jet and rocket-powered car designed to break 1,000 mph, has hit 501 mph during its first shakedown tests. Driven by land speed record holder Andy Green, the first person to break the sound barrier in a car, the Bloodhound LSR only used its Rolls-Royce jet engine during the test and is next aiming for 550 mph.

It’s getting there … quickly.

The 42-foot-long streamlined machine is being developed to go 1,000 mph with the addition of rocket power.

The British team was running the vehicle on a 10-mile track cleared in the Kalahari Desert’s Hakskeen Pan dry lake bed and aiming for 600 mph during this round of tests.

Driver Andy Green said he lifted off the throttle when he reached that speed, but that in the brief moment the jet engine took to wind down it continued to accelerate to 628 mph. The higher velocity meant that the car needed an extra kilometer to come to a stop, one of the lessons learned during the shakedown run.

The team is aiming to return as soon as next year to try to break the sound barrier and existing record of 763.035 mph, which was set by Green in the ThrustSSC in 1997, on its way to the 1,000 mph mark. The privately-funded project is being used to promote STEM education.

Only four land speed records have been faster than 628 mph.