They arrived at the agreed-upon time. Bob Lange and his son, Jason, walked up to the ranch-style house with the detached garage. It had a dented door and its paint was faded by years of near-desert California sun. That November day, though, it was mild in Yucaipa, an eastern Los Angeles suburb on the freeway to Palm Springs, and they were excited to discover if there was really a Porsche 356 hiding somewhere on the property. Except that Scotty Gates, the homeowner and their contact, wasn’t there.

The younger Lange had organized the meeting with Gates via a classmate of his. Dave Adkins and Jason Lange were firefighting students and friends at Crafton Hills College, where Adkins casually mentioned that his grandfather, Gates, had an old Porsche. Adkins thought it was a 356, but wasn’t certain. It was parked and hadn’t been driven in ages. Bob Lange owned a 911 at the time and asked if he could see the retired sports car on an upcoming California vacation. It was set.

But when they finally arrived, Gates was absent. Fortunately, Adkins answered the door after a few knocks and led them to the garage. He opened the side door, dust dancing in a column of light, and shined a flashlight inside. All they could see were boxes, curtain rods and plastic sheeting. Adkins led them into the warm garage, stumbled over some crates, and shoved a box aside to reveal a taillight. There was a Porsche, and it was a 356.

Rather than tearing the garage apart, the Lange decided to leave and call Gates back to see the car properly. They then learned the car was a convertible, probably from 1955, “because that’s the year I bought it.” It was parked in 1963, though, for engine repairs, and never completed.

They returned, and this time Gates was there. He wanted to sell the German convertible so that he could make room in the garage and buy his wife a new car. The negotiation was quick and easy. After a few minutes of removing boxes that had sat for years, a red, brush-painted Porsche 356 with white hardtop sat before them. Except it wasn’t a 1955, and it wasn’t a convertible.

The engine, type 546 — a 1.5-liter flat-four — sat in a few dusty, oily boxes scattered around the garage. Its number matched the chassis number. Gates had torn it down after his wife “blew it up,” but the odometer showed just 33,000 miles. Lange called a flatbed, inflated the Porsche’s now-flat tires and shipped it straight to John Wilberg’s German Parts Obsolete (then located in Southern California, now in Dunkirk, NY).

Wilberg opened his doors in 1988 and built his business finishing parts and cars to concours and museum standards. Lange’s speedster is no exception. Upon arrival at Wilberg’s shop, it was stripped and cataloged, revealing that it was originally Speedster Blue and one of only 44 Speedsters (of the 200 built) painted this color in 1954. The only option the original owner selected was a U.S. speedometer.

There was also evidence that at some point the little Porsche was driven through a chain link fence. Regardless, Wilberg completed the car in 2000, at which point Lange began driving and enjoying it on local drives and shows. And while the following may be sacrilege to the PorscheWahrheitsgetreu, he also used the car to deliver renderings, plans and art to his landscape architecture clients.

Never has there been a cooler little delivery car with a better story than Porsche #80130. 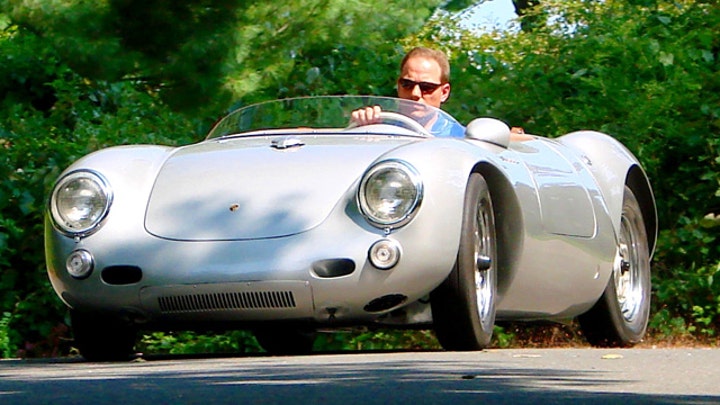