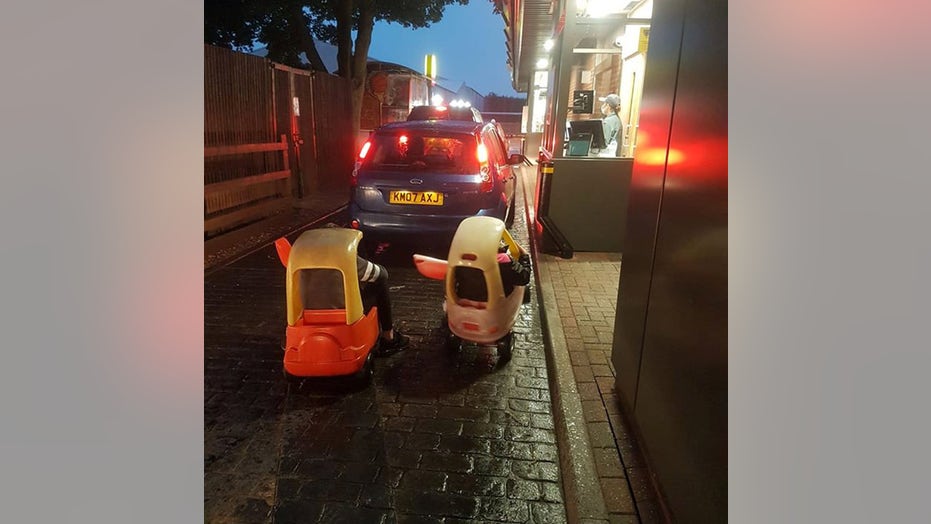 McDonald’s is reducing its menu, along with eliminating the all-day breakfast option due to the coronavirus outbreak.

Nothing would stop them.

Two sisters looking to get their McDonald’s fix after weeks of lockdown in the U.K. hopped in a pair of Little Tikes Cozy Coupes and hit the drive-thru last week.

The plastic single-seaters, which earlier this year surpassed the Ford Fiesta as the best-selling ‘cars’ in the U.K., were borrowed from their babysitter after their mom refused to take them on a burger run because of the expected crowds.

Danielle, 13, suggested she and her 9-year-old sister Teigan could use the cars and go on their own, South West News Service reported. So mom took them up on the offer, gave them the cars and filmed the trip to the local Wisbech location.

She followed the daring duo from her car as they struggled to propel the too-small rides along the cobblestone drive-thru lane in the rain. At one point, Teigan’s car even tipped over, but she was fine.

"I didn't think they were actually going to go through with it, but they've been trying for ages to find a McDonald's near us that is open,” their mother said.

The staff at the store got a kick out of the effort, which had an unexpected Happy Meal ending, as they messed up the order and ended up giving the girls the corrected one for free.