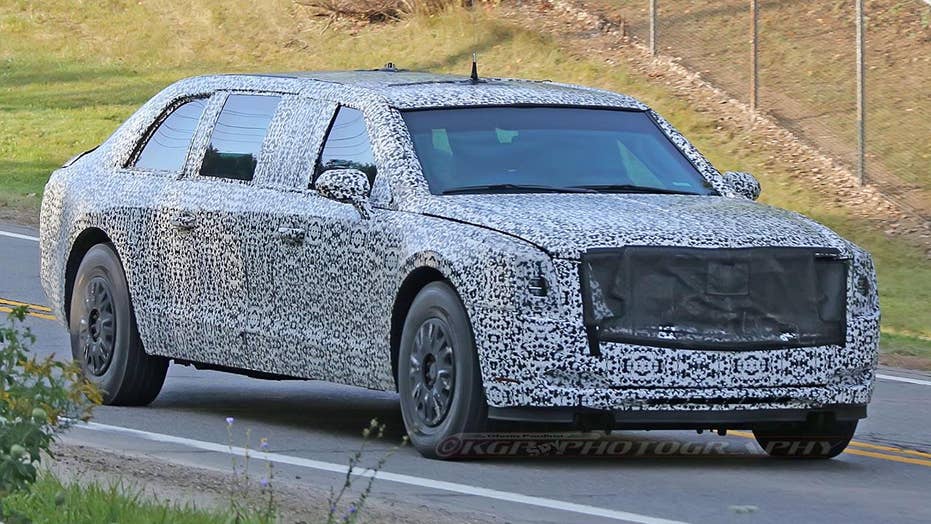 President Trump has been riding around in a very old car since he took office last year, but Fox News has learned exclusively that he'll be getting an all-new Cadillac-branded model in time to take a road trip in it this summer.

President Trump isn’t the only world leader getting a new car this year. He might not even be the first.

Following an exclusive report from Fox News that the U.S. Secret Service will begin using a next-generation presidential limousine late this summer, Russia’s Industry and Trade Minister, Denis Manturov, told Russia Today that a new state car being developed for President Putin has passed its final crash test and could be on the road in a few weeks.

“The cars for trial will be delivered on time before the end of April,” he said. “I hope [the president] will start using this vehicle very soon,” Manturov said.

The standard version of the new Russian car was revealed in images from a patent application. (NAMI)

Unlike Trump’s limousine, which is a highly specialized vehicle that Cadillac will only build about a dozen of for the White House fleet, Putin’s car is part of a state run-project that’s developing a line of Russian-built cars and utility vehicles for the nation’s government officials that are meant to replace thousands of imports currently in use.

Putin’s will likely be a little more special than the rest, with a stretch body and either a V12 or V8 motor reportedly engineered with help from Porsche. Prototypes of the standard sedan have been spotted being tested wearing the same sort of black and white camouflage that’s used to conceal the design details of the Cadillacs from spying cameras before they make their official debuts painted black.

Manturov wouldn’t commit to the car being ready in time for the Russian presidential inauguration event on May 7, but that would give Putin some bragging rights over Trump, who’s been riding around the same vehicles the Obama White House used since he took office last year.