NASCAR gives Bubba Wallace show of support ahead of Geico 500

NASCAR drivers and others walked alongside Bubba Wallace in a show of support at the Talladega Superspeedway on Monday after a member of the Richard Petty Motorsports team discovered a noose in the team's garage stall.

Bubba Wallace has been wearing an American flag facemask at NASCAR tracks in recent weeks, but he didn’t put it on at the end of the Geico 500 at Talladega Superspeedway after a noose was found in his garage. It wasn’t a protest, it was a show of strength.

“Sorry I’m not wearing my mask, but I wanted to show whoever it was that you’re not going to take away my smile,” Wallace told Fox Sports reporter Jamie Little.

Wallace has become the central figure in NASCAR’s response to the civil rights movement sweeping the country, which has included a ban on displays of the Confederate flag at its events. Prior to the race, the entire NASCAR Cup Series field stood behind Wallace on pit row during the invocation and playing of the national anthem to show their support.

“The pre-race deal was probably one of the hardest things I’ve ever had to witness in my life,” Wallace said. 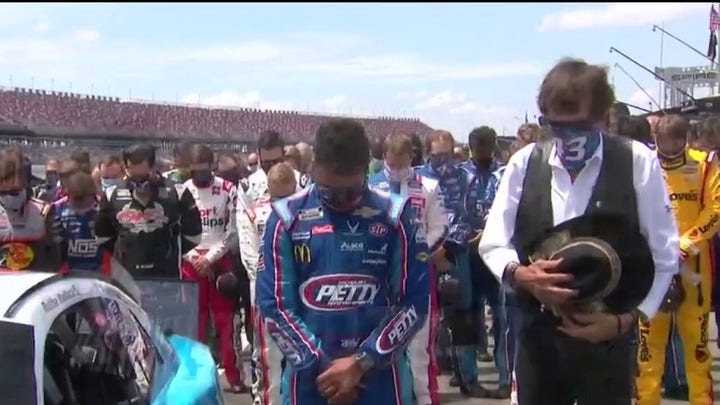 “It’s been tough. It’s been hell, really, ah, I wouldn’t say hell, it’s just been hectic. You know, carrying this weight and carrying this burden. I wouldn’t really say burden, either. I’m proud to stand where I’m at.”

Wallace led the race for one lap with 27 laps to go and was in contention to win, but ran out of gas near the end and was pushed to the pits by competitor Corey LaJoie, allowing him to restart and finish in 14th place.

Wallace greeted a group of black fans who drove from Atlanta to see their first race thanks largely to the attention he’s brought to the sport in recent weeks.

“This is probably the most badass moment right here,” Wallace said. "The sport is changing."