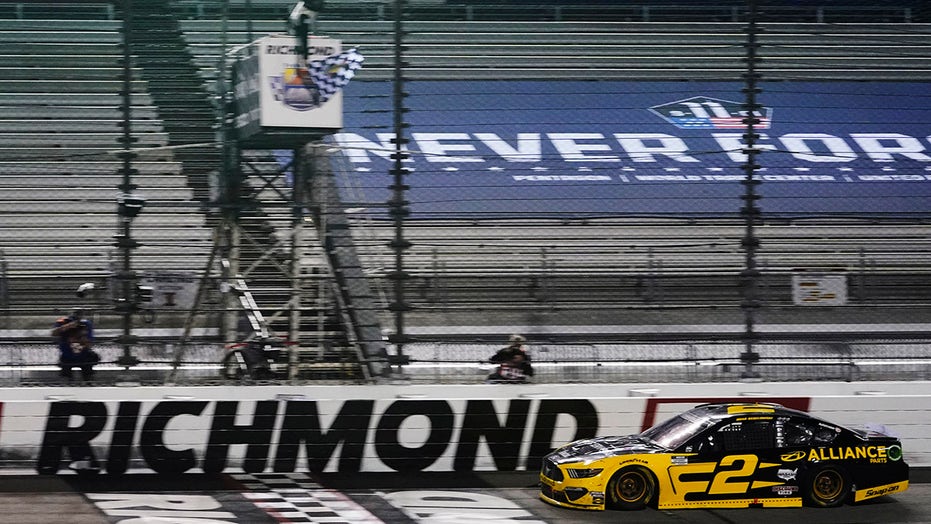 Brad Keselowski entered NASCAR's playoffs certain he has as good a chance at the Cup championship as favorites Kevin Harvick and Denny Hamlin. He even predicted he’d win at Richmond Raceway.

His confidence was justified as Keselowski dominated Saturday night at Richmond Raceway, leading 192 laps in the second playoff race and advancing into the next round.

On a night when the only caution flags were scheduled by NASCAR, leading to plenty of green-flag pit stops that jumbled the leaderboard, Keselowski kept rising to the top.

"I tell you, it’s a chess game and I got blinders on," Keselowski said. “I don’t know what everybody is doing and who is where and who is on what strategy, but (crew chief) Jeremy Bullins, the whole 2 team, excellent performance.”

Harvick, the title favorite, won last week’s opener to earn the automatic berth into the second round. Hamlin, derailed at his home track of Richmond by a speeding penalty, finished 12th but still advanced into the next round based on points.

Keselowski was the only driver able to run with Harvick and Hamlin when racing resumed in May following a pause for the pandemic. He won three earlier races, earned a contract extension at Team Penske and steadfastly maintained he should not be discounted in the title race.

He didn’t do a celebratory burnout after making good on his Richmond prediction because that specific No. 2 Ford has won twice in as many races this year and Keselowski wants it intact for the championship-deciding finale at Phoenix.

That doesn't mean he thinks he's already locked up a berth in the title race.

“We’ve got to get there," he said. “The last two years I haven’t made it all the way, so we’ve got to get all the way there, but if we can get to Phoenix, we’re gonna be really good. ... I don’t want to look too far ahead, the next round is going to be really difficult, but still I am really pumped about this performance.”

Keselowski also gave Team Penske a sweep of the day – Will Power won for the IndyCar arm of the organization earlier Saturday.

Harvick, Hamlin and Keselowski are the only drivers locked into the next round of the playoffs. Hamlin has six wins, but just one in the last nine races, leading to frustration.

“It just seemed like once the track rubbered up, we just weren’t any good,” he said.

Martin Truex Jr. finished second at Richmond, followed by Keselowski teammate Joey Logano and Austin Dillon, who has opened the playoffs with back-to-back top-five finishes for the first time in his career. Harvick finished seventh.

“I wanted to win and going for three in a row here would have been pretty cool,” Truex, who swept both races on the 0.75-mile oval last season, said. There still was satisfaction, though. “When your car is off and you can run second, it says a lot about your team.”

Logano called it a “pick your poison” night when adjustments never got his car quite right, but was happy to get his second consecutive third-place finish in the postseason.

“We’re doing what we have to do. We scored stage points and a top-five and puts us in a pretty good spot for next weekend,” Logano said. “... You can top-three, top-five all the way to Phoenix if you keep doing this.”