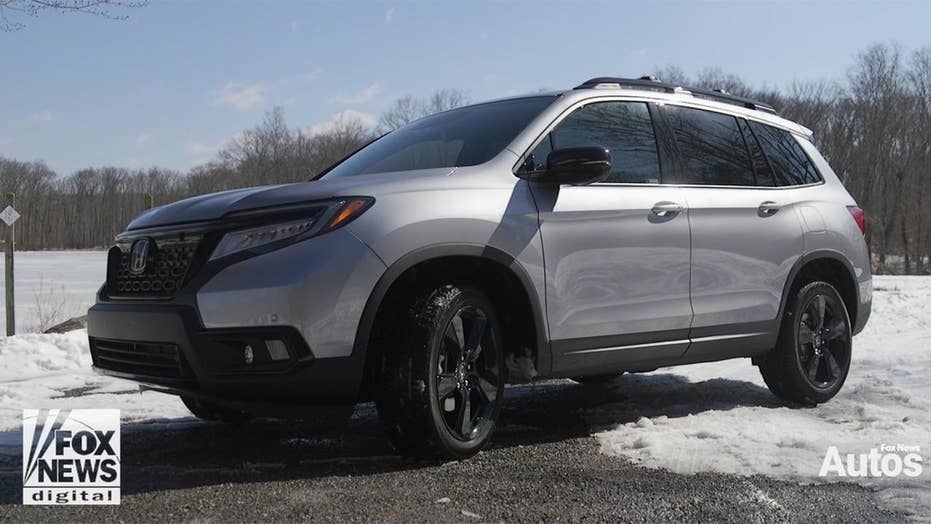 The original Honda Passport was a rebadged Isuzu Rodeo (Honda)

The all-new 2019 Passport is essentially a 2-row, slightly smaller version of the 3-row Honda Pilot. But it’s still pretty big.

Up front, it has the exact same spacious, well-appointed cabin with seating for 5 passengers. In the rear, there’s a cavernous cargo area where the Pilot’s 3 extra seats would be. It also has storage below the floor with room for a spare tire, which the Pilot has mounted awkwardly beneath it. Under the Passport, you’ll find nearly an inch of extra ground clearance.

Hovering 8.1 inches above the surface, the Passport isn’t exactly a giraffe, but combined with a half-foot shorter overall length, the lift provides better approach, departure and breakover angles than the Pilot has. Those aren’t the kind of terms you typically hear when discussing a Honda, but it really wants you to think of the Passport as something of an adventure vehicle.

Not a true off-roader, but more off-roady than anything else in the lineup. A point that's driven home by unique front and rear styling that features high-riding, scuff-proof bumpers at both ends, even on front-wheel-drive models. A selection of accessory packages let you tough it up even more with fender flares and metal running boards.

The price starts at $33,035, and all-wheel-drive is an extra $1,900. Four trim levels are available, with a fully-loaded top of the line Elite AWD ringing up at $43,680. All Passports get the same 280 hp 3.5-liter V6 and 9-speed automatic transmission, and the all-wheel-drive system can send 70 percent of the power to the rear and all of that to either side as needed. Sand, Mud and Snow modes help it figure out how best to do that. Standard fare includes Apple Carplay and Android Auto, automatic emergency brakes, lane-keeping assist and radar cruise control, but the base model does without a blind spot warning system.

Every Passport also rides on snazzy 20-inch wheels with relatively low-profile tires that are much better on the street than trails, where a little extra spring in its step would be nice. They’re not terrible on gravel roads, but that princess who had the issues with the pea would definitely complain. Consider a set of all-terrain instead of all-season rubber if you plan to drive into the wilderness often.

The fully independent suspension works well there, though, and is limber enough to get you through ruts and over small rocks and logs. You will want to stick to wide trails, because the Passport is just as broad as the Pilot, which is great when you’re loading up the family, less so when the scrub starts closing in. A 360-degree camera would be a handy feature, but one isn’t available.

In the snow, you can get a real feel for how the Passports all-wheel-drive system works, shuffling power around as it searches for the best purchase, finding it and then powering you away without much fuss. Since this is likely the slipperiest situation most Passports will find themselves in, that’s key.

Ideally, the Passport would be a smidge narrower, but if you don’t need to haul around the Brady Bunch, it’s still more fun than a Pilot without giving up any of the comfort, ride and quietude that makes its big sister the best of the large crossovers.

As a competitor to a range of SUVs that encompasses the likes of Jeep Grand Cherokee, Ford Edge, Chevy Blazer and Nissan Murano, the Passport’s blend of on-road comfort with a rugged edge definitely makes it a compelling option for shoppers who want to be ready to turn off beaten path, but aren’t sure if they ever will.