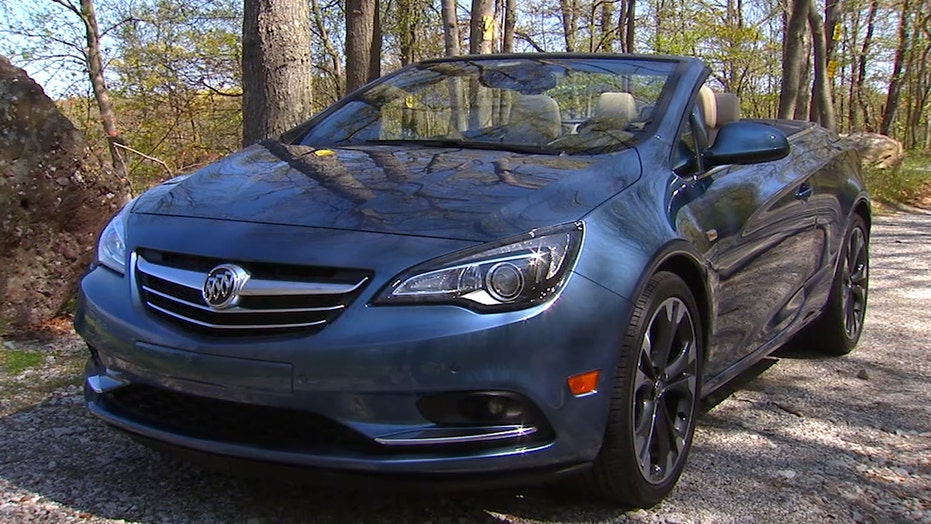 Return of the topless Buick

Buick has built one for the birds. Snowbirds, that is.

The 2016 Cascada convertible is the brand’s first drop-top since the 1991 Reatta, and the only true four-seat convertible car you can get from an American automaker. (The Chevy Camaro and Ford Mustang are both 2+2s with tiny, largely useless back seats.)

With it, Buick is targeting the convertible hot spots of California, Texas and Florida, along with New York and New Jersey. Those last two surely have less to do with their local climates than with the annual migration of a segment of their flocks to places like Boca Raton and Miami.

The Cascada comes prepped for this sort of double duty. Its multi-layered fabric roof is well-insulated from sound and the elements. With it up, the car could pass for a coupe. Combine that with front-wheel-drive, heated seats and a heated steering wheel, and anyone caught in an early winter flurry before heading south should get through it just fine. It’s a four-season car, even if most Cascadas will never see more than three.

Of course, the convertible’s archenemy, rain, lurks year-round. But the Cascada has you covered. If the skies open up, the roof can be closed in just 17 seconds with the car moving at up to 31 mph.

That figure belies this Buick’s origins. It’s imported from Poland, where 31 mph equals a nice, round 50 kmh, and it has been on sale overseas as the Opel Cascada for three years. It has a sporty, import look, but is no sports car. It’s been fortified for the trip across the Atlantic to give it a sturdier feel, pushing its weight up to near the two-ton mark. Nevertheless, its 200 hp turbocharged engine moves it without much effort, and the chassis doesn’t flex or creak on bumpy or twisty roads.

The ride is on the firm side, however, and the narrow rubber on its 20-inch wheels will let you know what they think about potholes. This is all the more reason to head for the smoothly paved sunshine states.

You can bring a lot of stuff with you. The trunk’s a good size with the top up, and it still fits the requisite golf bag with it down. There’s also a large pass-through into the cabin if you fold down the rear seats, so don’t forget the Boogie Boards.

Or you can put people in them … actual full-size people. Four 6-footers will fit in the Cascada in reasonable comfort, even under the roof. Maybe not cross-country road trip comfort, but good enough for a night on the town.

That’s not to suggest that the Cascada is lavishly appointed. In fact, it’s a little long in the tooth inside. There’s a lot of hard plastic both below and above your waistline, more buttons on the dashboard than at a political rally and an infotainment system so out of date, you almost expect to find the Soviet Union bordering Poland on the navigation system.

At least it comes standard at the Cascada’s $33,990 base price. Keeping it simple, there are no options available, just a premium trim level for $36,990 that adds a few doodads like lane departure warning, two-tone wheels and rain-sensing wipers that turn themselves on when it starts to sprinkle, just in case that slips your mind. Hey, it happens.

You can live without any of it, but I doubt you’ll have much of a choice. This is the kind of car people buy off the lot, and no doubt the dealers will mostly be stocking the good stuff.

Is it as fun to drive as the similarly priced Camaro convertible? No, but it is more functional and mature. Its closest competitor really is the slightly pricier Audi A3, which comes to our shores from Hungary. If you want something comparable from Western Europe or Japan, it’ll cost you much, much more.

I doubt there will be much cross-shopping with the Audi, anyway. More likely, you’ll be looking to trade in your Chrysler Sebring/200, America’s last easy living convertible. And compared to that, the Cascada will blow you away.

Top up or down.