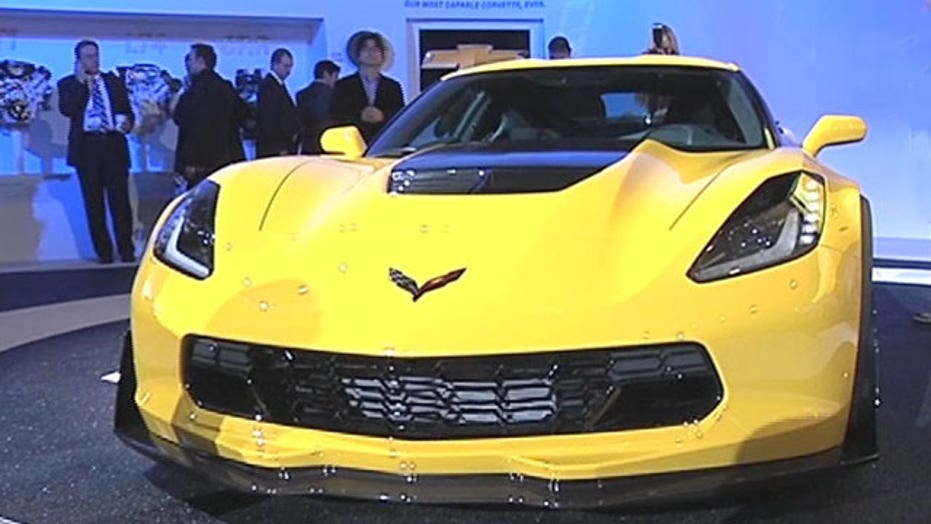 The New King of Corvettes

A new King Corvette has arrived, and it definitely gives General Motors some bragging rights at the Detroit Auto Show. With “at least 625 horsepower,” and 635 pound-feet of torque, this top-performance variant of the latest C7 Stingray could shake up the roster of top production-car performance numbers.
And it sets the form for the Corvette C7.R race car, also shown here at Detroit and headed for Daytona later this month.

The LT4 engine is only one inch taller than the LT1 in the Corvette Stingray. The LT4 is one of the only supercharged engines in the world to incorporate cylinder deactivation technology, and it also has variable valve timing.

Also of note is the Z06’s eight-speed automatic transmission. It’s an all-new GM-designed transmission, designated 8L90, and while it’s a traditional, hydraulically controlled automatic, GM says that it provides the quick shifts of dual-clutch boxes (even faster than Porsche’s PDK, they say), yet with more smoothness. And the eight-speed will allow up to a five-percent efficiency improvement over a six-speed automatic.

Z06 models will include the Drive Mode Selector, just as Stingray Coupe and Convertible models, which will allow access to settings for launch control, active-handling systems, traction control, and Sport and Track modes. Magnetic Selective Ride Control dampers are included in the Z06, as well as a three-mode electronic limited-slip differential (eLSD).

Also just as with other Corvette Stingray hardtop models, the Z06 will offer a removable roof panel that will enable some of the benefits of a convertible. That’s allowed through the new C7 Corvette’s stiffer aluminum-frame construction—with extra adhesive bonding used for the Z06.

The exterior changes on the Z06, versus the Corvette Stingray, are entirely functional, and nearly every panel and piece of trim is different. Design director Tom Peters, in a release, points to the flared fenders needed to accommodate larger wheels, the larger vents for cooling, and all the tweaks necessary for improved aerodynamics and high-speed stability.

For those who plan to use the Z06 primarily as a track machine, the Z07 Performance Package is the way to go, as it adds Michelin Pilot Super Sport Cup tires, Brembo carbon ceramic-matrix brake rotors, and a set of upgrades aimed at maximizing downforce. In either case, special spin-cast alloy wheels that show off the brake hardware.

Want performance numbers? GM won’t say yet. And there’s plenty of time for more facts and teasers; the Z06 won’t arrive at dealerships until early 2015.