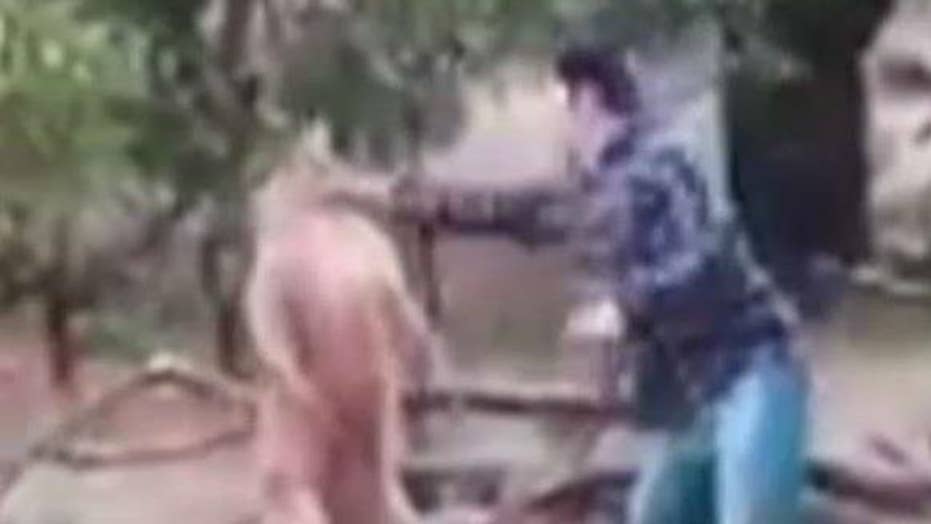 It’s been dubbed the most Aussie video you’ll ever see — a man dressed in flannel squaring off with a big kangaroo in the rugged Australian bush.

The footage of zookeeper Greig Tonkins went viral after the kangaroo put his hunting dog Max in a vicious headlock.

Since being posted to Facebook, the footage — which was filmed by Greg Bloom — has been viewed more than a million times.

But while the world has been caught up in the toe-to-toe, there’s much more to the story than meets the eye.

“This hunting trip was put together for a sick young man called Kailem who passed away from cancer last week,” said Mathew Amor, who organized the hunting trip in June when the inciden occurred.

RAVENOUS 14-FOOT PYTHON CAUGHT WITH 3 DEER IN ITS GUT

Amor told news.com.au he decided to organixe a small group of friends, including Kailem and Greig Tonkins, to go on the boar-hunting trip at his property in Condobolin, New South Wales, after hearing about Kailem’s deteriorating condition.

“And so a few of us got together to take him out, and another mate filmed more than an hour of video to put together as a DVD for Kailem and his family of the trip.”

The DVD included the minute of footage that has since gone viral.

Amor said it was totally out of character for his friend to hit the marsupial.

“My mate has a good government job, so he’s gone pretty quiet on this,” Amor laughed.

“We were driving along, the dogs are loose. They are trained to smell pig’s blood, and picked up a scent.

“The dogs went past 20 kangaroos, which they are trained not to touch.

“Anyway, this big buck got a hold of my friend’s dog. It just grabbed him.”

It’s been confirmed that Tonkins is a zookeeper at Taronga’s Western Plains Zoo in Dubbo.