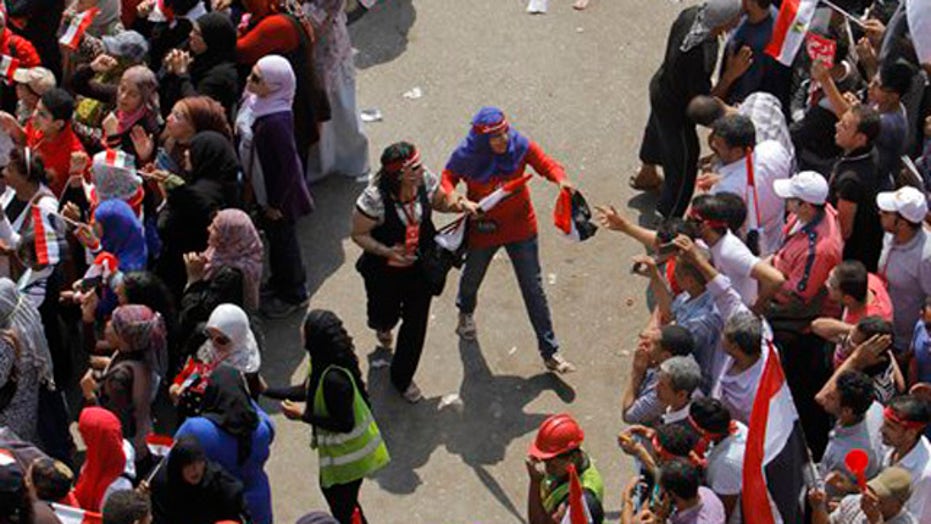 Christians in Egypt are facing a new wave of persecution at the hands of Muslim extremists, and human rights groups fear the situation could be on the brink of exploding.

While the attacks on Egypt's Christian community are not on the scale of persecution faced by their brethren in Syria and Iraq, the Coptics – mostly descendants of the people whose Pharaohs ruled ancient Egypt before the 7th century – say they face renewed isolation in the country.

“We are the weaker element in society, so if anything happens, we will be the first victims,” Mina Thabet, a Coptic activist and researcher at the Egyptian Commission for Rights and Freedoms, told FoxNews.com from Cairo.

“It is astonishing that Coptic citizens’ exercise of their constitutional, legal right to worship and build, renovate and reconstruct houses of worship is still hostage to the approval of a majority of the area’s residents,” Ishak Ibrahim, chief of EIPR’s Freedom of Religion and Belief Program

“You are a target for extremists when no one is supporting you,” he added in a reference to the “often-sluggish” protection the Christian community says it gets from the police.

While Egyptian President Abdel Fattah el-Sisi has taken steps to protect Coptic Christians amid his calls for national unity, many of the latest incidents have occurred in Minya Governorate of Upper Egypt, about 150 miles south of Cairo.

The mix of poverty and limited job prospects there is typical of the social conditions Thabet says could trigger the sort of unrest in which the country’s Christians – comprising Orthodox, Catholic and some Protestant members of the faith – become central targets, just as Jews were historically targeted during pogroms.

“Not all the people would blame the Copts,” he said. “But many ordinary Egyptians have strong thoughts toward the Coptic community.”

A recent incident saw Muslim mobs in the Minya village of Nasreya descend on the homes of five Coptic students, chanting they had “insulted” Islam in a video that was circulating showing the youths praying with their Coptic teacher.

In fact, the students had been making fun of ISIS, according to Coptic activists. While police arrested the teacher and detained him for questioning over four days, the Muslim mobs threw rocks at the homes of the youths in a bid to force their parents to hand their children over to the authorities, Coptic media reports say.

Blasphemy is a crime in Egypt, but human rights activists say the authorities have traditionally used the law to persecute minorities, among them Christians.

Thabet said the children remained detained by the authorities, as were other Christians who’d been victims of Muslim assaults.

“We have five Coptic children charged with blasphemy and insulting Islam,” he said. “We still have other open cases where Christians are charged with inciting violence as if they were the perpetrators, but where they were the victims.”

FoxNews.com reported last month how a Muslim mob attacked Christians in the Minya village of al Our, which had been home to 13 of the 21 Christians whose murder by ISIS in February was captured in a gruesome video appearing to show them being beheaded on a Libyan beach.

The Muslim protesters had opposed the Christians’ plan to build a new church to honor the 21, and had pelted them with rocks as they chanted they would never allow construction to begin.

This occurred despite President el-Sisi having personally given the official permission Egyptian law requires for work on a church to proceed – in contrast to no such permission being required for mosque construction.

No sooner had that incident been “resolved” with a so-called “customary reconciliation session” – the Copts said they were forced to agree that the church be built outside the village – when Muslim protesters attacked Christians in the Minya village of al-Galaa over the government-approved demolition and reconstruction of that community’s Church of the Virgin.

This was despite the Christians having agreed to a host of conditions, including that the church be restricted to one story, have no tower or bells, and that the village Christians apologize to the local Muslims for publicizing their plight in the media, according to the Egyptian Initiative for Personal Rights (EIPR), which publicized the incident.

“The forces vandalized the contents of the building and seized vessels used for religious rites, claiming that the site had no building permit,” said EIPR about the raid on the House of St. Youssef al-Bar.

The Maghagha archbishop later made public a series of letters showing the prayer house had been in building-code compliance. It also called on el-Sisi to personally intervene as it filed an official complaint against the Minya police force.

The raid took place just a day after police closed down sections of construction work in the Minya village of Abu Qurqas.

“It is astonishing that Coptic citizens’ exercise of their constitutional, legal right to worship and build, renovate and reconstruct houses of worship is still hostage to the approval of a majority of the area’s residents,” Ishak Ibrahim, chief of EIPR’s Freedom of Religion and Belief Program, said in a statement of the constraints imposed by the Muslim community.

In an interview from his Egyptian base, Ibrahim told FoxNews.com that things were far worse for Christians in other parts of the Middle East.

“We are not in a compression situation,” he said. “We are talking about rights, and (how) the state has not (fulfilled its duty) to protect the Copts and enhance equality” with Muslims.

Still, he stressed the targeting of Christians in Egypt had noticeably “risen” this year, while Thabet said Christians made up the vast majority of some 100 Egyptians killed in religion-based violence since the 2011 revolution that swept former President Hosni Mubarak from power.

Christians faced considerable mob violence during the Egyptian security forces’ crackdown on supporters of ousted President Mohamed Morsi in August 2013, when some 80 churches around the country sustained damage or were burned down amid the chaos, Thabet said.

Both he and Ibrahim criticized the authorities’ use of “customary reconciliation sessions” to supposedly reconcile community differences following attacks on Copts – even in many cases that might otherwise be referred to the courts.

A sharp contrast and sign of hope comes from the governorate of Al Manufiyya, which is north of Cairo. There, Muslims are helping the Copts build a new church dedicated to the Virgin Mary, according to the Catholic news outlet Agenzia Fides. Coptic Orthodox Bishop Benyamin appealed to local Muslims to contribute to the project, and the response was immediate, officials said.