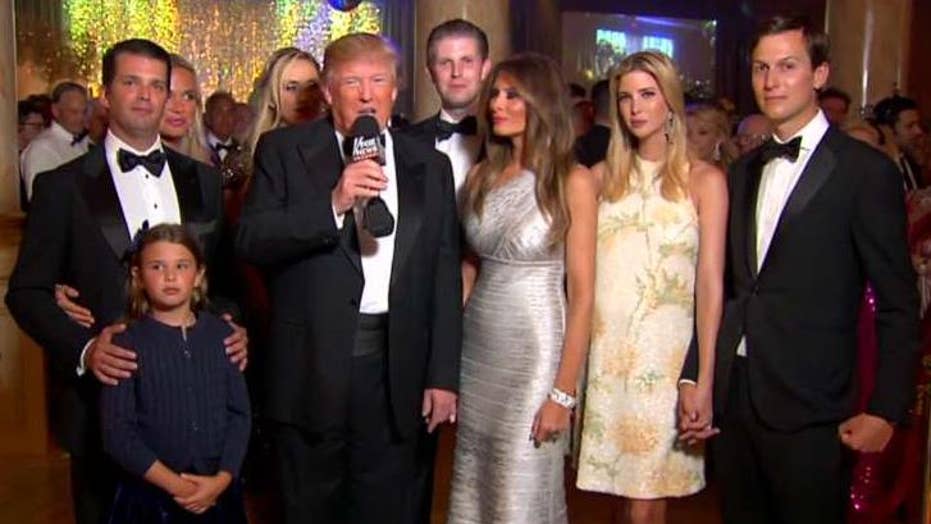 GOP candidate starts the election year as the Republican frontrunner

From Times Square to Tokyo and all points in between, revelers welcomed 2016 with joy and optimism, bidding farewell to a year that ended with deadly terror attacks that left nations reeling and nerves rattled.

In New York, a crowd of 1 million people crammed the blocks around Times Square to watch the famed 11,875-pound Waterford crystal ball complete its minute-long descent to mark the start of the New Year.

The festivities were watched over by an unprecedented 6,000 police officers -- some in civilian clothes, many heavily armed -- as well as rigid security screenings.  Officers from the NYPD's elite emergency services unit surveyed the scene from Times Square rooftops, peering below through binoculars and scopes as snipers stood beside them. Heavily armed officers carrying tactical rifles stood on nearly every corner for blocks as police helicopters buzzed overhead after checking in on other parts of the city, including the World Trade Center and Statue of Liberty.

"This is the iconic New Year's celebration for the world," New York Police Department Commissioner William Bratton said. "We have no threats we're aware of directed against this event tonight but nevertheless we still plan for the worst and then expect the best."

Some in the crowd admitted to being nervous to gather in such a famous location in the weeks after the Paris and San Bernardino attacks. Just hours earlier Thursday, an ex-con was charged in upstate New York with planning to carry out a New Year's Eve attack at a bar to prove he was worthy of joining the Islamic State terror group. That case prompted the city to cancel its New Year's Eve fireworks celebration.

Ashley Watters, 18, a freshman at Temple University hailing from Gettysburg, Pennsylvania, called the threat of terrorism "the elephant in the room."

"I talked to my dad before I left and said `I love you and hopefully ISIS doesn't come,"' said Watters. "My dad said, `Keep your eyes out.' He feels the same way, you can't live in fear. I'm not going to miss out on an opportunity."

Others were heartened by the massive security presence.

"I actually believe this is the safest place in the world," said Eku Kabba, 27, who has made the trip from Gaithersburg, Maryland to Times Square for the last five years.

"It could happen anywhere, but you can't start the world panicking," he said as a recording of the James Brown song "Living in America" blared from the stage. "Look around; there are men in uniform everywhere."

Terror fears were a part of New Year's Eve elsewhere around the world. In Munich, two major rail stations were closed for hours after German intelligence authorities received a tip that ISIS militants had planned multiple sucide bombings. The stations were later re-opened and the city's celebrations proceded as usual.

In the Middle Eastern megacity of Dubai, fire broke out two hours before midnight at The Address hotel, in the area where a massive fireworks display was being prepared. At least one person suffered a heart attack from the smoke and over-crowding during evacuation, and 14 suffered minor injuries.

It was unclear what caused the fire, which ran up the 63-story building. But even as the blaze raged, the Dubai Media office declared on Twitter: "New Year celebrations in Dubai will continue as scheduled."

Paris, still reeling from the Nov. 13 terror attacks that killed 130 people, canceled its usual fireworks display in favor of a 5-minute video performance at the Arc de Triomphe just before midnight, relayed on screens along the Champs Elysee, where people chanted.

Paris Mayor Anne Hidalgo said the show was aimed at "sending the world the message that Paris is standing, proud of its lifestyle and living together."

French President Francois Hollande used his traditional New Year's Eve speech to warn that the terrorist threat is still at its "highest level."

In Bangkok, another city scarred by terror in the past year, tens of thousands of people rang in the new year at the intersection where a pipe bomb killed 20 people less than five months ago, with live music and a countdown.

Up to 5,000 police officers were in the area, with explosive ordnance disposal experts sweeping the area ahead of time.

The party atmosphere was as present as ever in Rio de Janeiro, which kicked off its Olympic year with a fiesta on Copacabana Beach attended by more than 2 million people, according to police estimates. Brazil's most popular New Year's Eve show was illuminated by 24 tons of fireworks fired off over almost 16 minutes. To celebrate Rio's hosting of the 2016 Summer Games in August, the soundtrack for revelers included music from previous Olympics and songs paying homage to samba on its 100th anniversary.

In Cairo, people put aside fears of the growing number of militant attacks throughout Egypt to celebrate the new year. Engineering graduate Mohamed Youssef, whose military service begins in a few months, attended a house party.

"It doesn't matter if they deploy me to Sinai or throw me in the western desert," he said. "I don't care if I lose a leg or my life. Tonight, we drink and dance!"

At the Giza Pyramids, hundreds of people gathered for a fireworks and lighting display at the stroke of midnight.

In the final hours of 2015, Pope Francis encouraged humanity to hang on to recollections of good deeds so that gestures of goodness can be seen triumphing over evil.

Francis presided over a year's end prayer service Thursday evening in St. Peter's Basilica, where he mused about how people are sometimes driven by "insatiable thirst for power and by gratuitous violence." He said it was impossible to forget "so many days marked by violence, by death, by the unspeakable suffering of so many innocents."