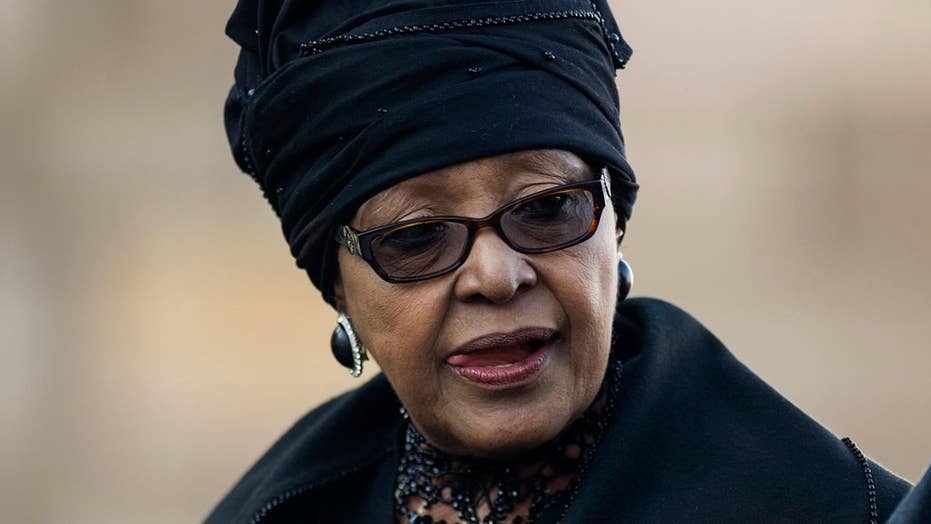 JOHANNESBURG – Tens of thousands of people sang, cheered and cried as the flag-draped casket of anti-apartheid activist Winnie Madikizela-Mandela was escorted from her official funeral on Saturday, after supporters defended her complex legacy with poetry and anger.

Thunder rumbled and it began to rain as the casket left the 40,000-seat stadium — a blessing, witnesses said.

Heads of state joined the five-hour celebration of the powerful figure who will be buried as a national hero following lively debate over how she should be remembered after her death on April 2 at age 81.

Often called the "Mother of the Nation" and "Mama Winnie," Madikizela-Mandela fought to keep South Africa's anti-apartheid struggle in the international spotlight while her husband, Nelson Mandela, was imprisoned.

"Long before it was fashionable to call for Nelson Mandela's release from Robben Island, it was my mother who kept his memory alive," elder daughter Zenani Mandela-Dlamini said as the crowd erupted in cheers.

Many South Africans have stood up for Madikizela-Mandela's memory against critics who characterized her as a problematic figure who was implicated in political violence after she returned from years of banishment in a rural town.

"Proud, defiant, articulate, she exposed the lie of apartheid," President Cyril Ramaphosa said during his tribute. "Loudly and without apology, she spoke truth to power."

And as the casket left the stadium, another speaker read out Alice Walker's poem, "Winnie Mandela We Love You."

Since her death, supporters have visited Madikizela-Mandela's family home in Soweto, the Johannesburg township where she lived, and condolences have poured in from around the world in remembrance of one of the 20th century's most prominent political activists.

Civil rights leader Jesse Jackson, who attended the funeral, said Friday that Madikizela-Mandela was responsible for making the anti-apartheid movement "a global struggle."

Tens of thousands of people sang, cheered and cried as the flag-draped casket of anti-apartheid activist Winnie Madikizela-Mandela was escorted from her official funeral on Saturday. (AP)

Many memorializing Madikizela-Mandela recognized her as a political force in her own right.

"In apartheid South Africa, the combination of patriarchy and racism together meant that black women confronted enormous obstacles from the cradle to the grave, making her own achievements all the more exceptional," U.N. Secretary-General Antonio Guterres said Friday at a memorial in New York, not mentioning Nelson Mandela at all.

The young Madikizela-Mandela grew up in what is now Eastern Cape province and came to Johannesburg as the city's first black female social worker. Not long after, she met African National Congress activist Mandela and the couple married in 1958, forming one of the most storied unions of the century.

After Mandela was imprisoned, Madikizela-Mandela embraced her own leadership in the freedom struggle with steely determination and at great personal sacrifice.

For years, she was routinely harassed by apartheid-state security forces, imprisoned and tortured. In 1977, she was banished to a remote town.

It took a toll. When Madikizela-Mandela returned from exile she became involved with a group of young men known as the Mandela United Football Club. The men were accused of the disappearances and killings of at least 18 boys and young men and the leader was convicted of killing a 14-year-old, nicknamed "Stompie," accused of being a police informer.

In 1991, a court found Madikizela-Mandela guilty of the boy's kidnapping and assault and sentenced her to six years in jail. She appealed and was found guilty of being an accessory in the assault, and the sentence was reduced to a fine and suspended prison term. Madikizela-Mandela denied knowledge of any killings.

Mandela divorced her in 1996, claiming infidelity and saying that after his release from prison, his wife made him "the loneliest man."

Though she fought fiercely for democracy, Madikizela-Mandela floundered in a political career after the first free elections in 1994. Mandela, South Africa's first black president, fired her as one of his deputy ministers. Her stints as a lawmaker, a post she held until her death, were lackluster.

Mandela-Dlamini, her elder daughter, accused the media of being complicit in a long "smear campaign" against her mother.

"Praising her now that she's gone shows what hypocrites you are," she said during her speech. "It's become clear that South Africa, and indeed the world, holds men and women to different standards of morality."

Ramaphosa said the traumas that Madikizela-Mandela endured as a target of the powerful apartheid state inflicted "deep wounds" that never healed — and went largely ignored by many peers.

"She bore witness to our suffering . We did not do the same for her," he said. "Today is a moment to heal those wounds. Today is a time for healing as we put Mama Winnie to rest."