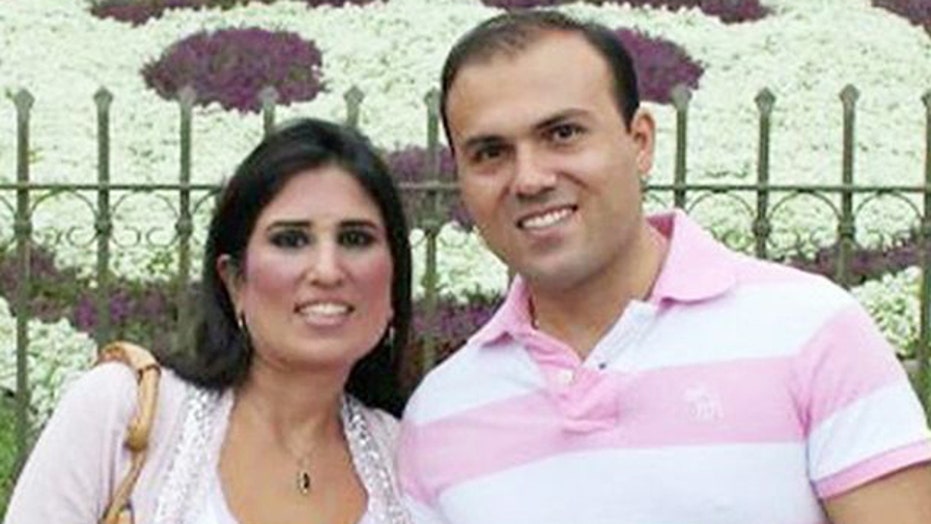 Wife of US pastor held in Iran to testify before Congress

Naghmeh Abedini to press lawmakers to fight for husband's freedom

The wife of the American pastor imprisoned in Iran for his Christian faith is on her way to Washington, where she will press lawmakers to fight for her husband's freedom.

Naghmeh Abedini, whose husband Saeed Abedini was sentenced to eight years in prison in his homeland, will appear before the Tom Lantos Human Rights Commission in the House along with her U.S. based attorneys, Jay and Jordan Sekulow of the American Center for Law and Justice. Their goal is to convince the lawmakers to ratchet up pressure on Iran, either directly or through the Obama administration, which they say has been too quiet on the matter.

“He has been in that brutal prison long enough. He hasn’t broken any laws. It’s not just Saeed, there are many others. They are being persecuted because of their beliefs, and I hope this hearing sheds light on other cases as well,” said Naghmeh Abedini in an exclusive interview with Fox News.

The commission is a bipartisan group co-chaired by Rep. James McGovern, D-Mass., and Rep. Frank Wolf, R-Va. The pastor's cause has been embraced by dozens of members of Congress.

"We have seen tremendous support from more than 100 members of Congress who understand the growing problem of religious persecution and have called for the release of American Pastor Saeed Abedini," said Jay Sekulow, Chief Counsel of the ACLJ.

"This hearing represents a significant opportunity to elevate Pastor Saeed's plight and to encourage our State Department and White House to engage this case at the highest levels. For a U.S. citizen to be facing years in one of Iran's most deadly prisons -- beaten and abused daily -- simply because of his Christian faith is unconscionable,” Sekulow said.

Abedini has been held in Iran’s notoriously brutal Evin prison since September 2012, as his wife and two young children fear for him at their home in Idaho. After months of being held without any notice of formal charges, Abedini, a U.S. citizen, was sentenced to eight years in prison Jan. 27 on charges of evangelizing and threatening national security.

More than a decade ago, Abedini worked as a Christian leader and community organizer developing Iran’s underground home church communities for Christian converts who are forbidden from praying in public churches. He was arrested in 2005, but released after pledging never to evangelize in Iran again.

“I’m disappointed. This country was founded on religious liberty and now there has been a shift toward silence. I’m just heartbroken about it,” his wife said.

Naghmeh Abedini has not had any communication with her husband since early January, when family members in Iran received their weekly call from Abedini and conferenced her and their children in to the phone conversation.

Now the only updates she gets are from his family in Iran. Recently, they have said Abedini has suffered serious internal bleeding from beatings in prison.

“As a country, we are staying silent. When you are silent, you are making a loud statement. You are allowing it,” Naghmeh Abedini said, in what may be a preview of her testimony to lawmakers.

Naghmeh’s frustrations go beyond the administration’s silence. She receives frequent calls from the State Department where, she said, she is the one “providing the information.”  She still has no specifics on what they are doing, she says.

“The special focus on Friday will be on Pastor Saeed. The State Department will be there and will be forced to answer questions. These are members of Congress who know about the case and will push for answers,” said Jordan Sekulow. “The State Department has only said something about Pastor Saeed when asked. There’s no mention of him unless they’re being pressured for a statement and nothing proactive is being done.”

Sekulow points to the embarrassment of having the European Union representatives take a firm and public stand at this week’s United Nations meeting demanding Pastor Saeed’s release.

The ACLJ, along with its European affiliate, had filed a document in mid February with the U.N. Human Rights Council (HRC) calling on Iran to immediately release Abedini, citing Iran’s violations of international law and human rights abuses.

“Imagine you’re a U.S. citizen detained for your faith abroad and the E.U. is speaking out, but your own country is remaining silent,” Sekulow said.

“We know that the administration can’t just snap their fingers to release him, but the delay in even coming out publicly is affecting Pastor Saeed’s fate,” he said.

Last month, more than 80 members of Congress sent a bi-partisan letter to Secretary of State John Kerry urging him to “exhaust every possible option to secure Mr. Abedini’s immediate release.” The letter stated that “[a]s a U.S. citizen, Mr. Abedini deserves nothing less than the exercising of every diplomatic tool of the U.S. government to defend his basic human rights.”