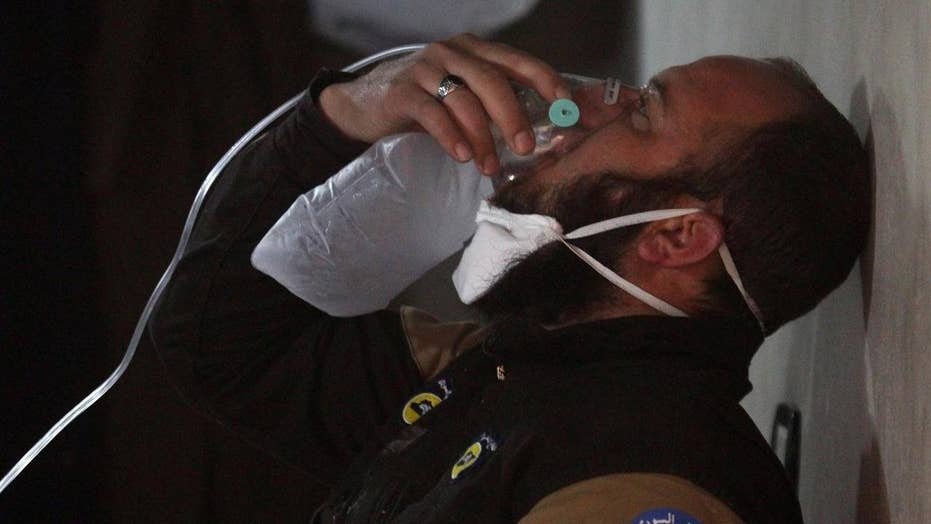 President Trump has called reports of a chemical weapons attack in Idlib, Syria on Tuesday that killed dozens, including as many as 27 children, an “affront to humanity.”

Turkish officials said Thursday that autopsies on victims of the attack in Syria confirm chemical weapons were used, and “point to possible sarin use.” Many have placed the blame on the country’s own president, Bashar al-Assad. The Syrian government denies any involvement. Russia, supporting Syria’s disavowal, suggested that the gas belonged to rebels in the war-torn nation.

This is not the first time Syria has denied assaulting its own people with chemical weapons. U.S. intelligence agencies estimated that more than a thousand Syrians were killed by weaponized sarin gas near Damascus in August 2013, in an attack carried out by the Syrian government.

Sarin is a man-made nerve agent that is known to be used as a chemical weapon. According to the CDC, “nerve agents are the most toxic and rapidly acting of the known chemical warfare agents.” Originally developed as a pesticide in 1938, sarin is a colorless, odorless and tasteless liquid that can be vaporized. Much more potent than the average pesticide, the Center for Disease Control calls sarin “the most volatile of the nerve agents,” able to quickly spread into the environment.

Though developed in Germany, the Nazis chose not to use sarin as a chemical weapon in World War II. Weaponized sarin and mustard gasses were used in 1988 by Iraqi dictator Saddam Hussein to kill nearly 500 Kurds. A terrorist attack on a Tokyo subway in 1995 used sarin as a weapon, killing 12 and injuring thousands.

Those who are exposed to vaporized sarin can experience symptoms within seconds.

HALEY SLAMS RUSSIA OVER SYRIAN CHEMICAL ATTACK, WARNS US MAY TAKE 'OUR OWN ACTION'

Videos and witness accounts of victims in respiratory distress and foaming at the mouth seem to indicate that sarin is the culprit. Fox News medical analyst Dr. Marc Siegel said that though he cannot confirm the gas used in the recent attack in Syria, “the descriptions from the witnesses are consistent with sarin gas exposure.”

Siegel described how sarin works, and its effects on the human body.

“We have impulses, neurotransmitters that allow nerves to conduct from one to the next. For example, when you move your arm, each time you make a movement, at the end of the movement the body releases acetylcholine that stops the communication from one nerve to the next,” he told Fox.

“All nerve gasses, even pesticides, are acetylcholine inhibitors. They stop the enzyme that stops nerve conduction. Without that enzyme, nerves keep firing, and firing, and firing. You get a proliferation of nerve firing.”

“The most common cause of death is respiratory arrest,” Siegel explained, “because the lungs keep getting the signal, you end up with bronchoconstriction and you can’t get air in and out. There is a tremendous amount of secretion in the lungs like mucus that blocks everything” he said, comparing the body’s response to a massive asthma attack where the victim stops breathing.

Children, he said, are particularly vulnerable to the damage, referring to the smaller size of their lungs which could close as a result of a sarin strike.

Sarin gas exposure is hazardous, but not always fatal. “People recover,” Siegel said of those with mild exposure. “If you don’t end up in a coma, you’ll probably be alright” in the long-term. He added that other injuries occur when panicked victims try to run from the chaos, leading to wounds and broken bones.

Sigel points out that the biggest issue when it comes to exposure is breathing in the poison gas, contaminating food and swallowing it. If exposed to the nerve agent, the CDC recommends evacuating the area and moving to higher ground. Victims are urged to seek medical care, and to remove the exposed clothing, and wash immediately with soap and water. An antidote, called atropine, reverses the effect of the gas. It was reportedly distributed whenever possible following Tuesday’s devastation in Syria.

At a UN Security Council emergency meeting on Wednesday, U.S. Ambassador to the UN Nikki Haley said the recent gas attack in Syria represents “a new low, even for the barbaric Assad regime,” adding that Russia shares the blame.

“As a physician,” Siegel said, “I find putting at risk the lives at risk of one’s own civilians deeply disturbing…. It demands international attention.”