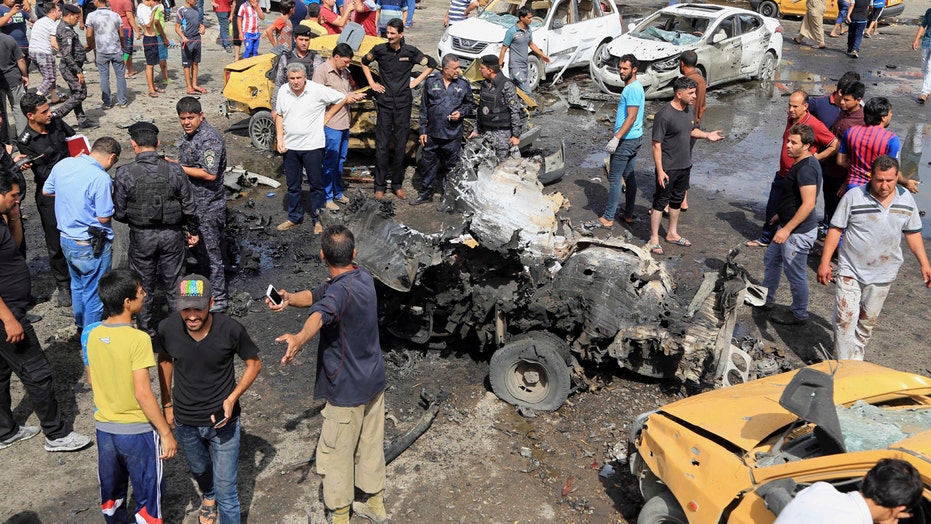 BAGHDAD – A wave of bombings struck outdoor markets and a restaurant in Shiite-dominated neighborhoods of Baghdad on Tuesday, killing at least 69 people, officials said — the latest in a string of attacks in and around the Iraqi capital that have left more than 200 dead in the past week.

The four separate bombings were a further challenge to the beleaguered government of Prime Minister Haider al-Abadi, who is struggling to prove that his forces can maintain security in Baghdad and elsewhere.

One of the bombings Tuesday struck an outdoor market in the heavily Shiite district of Sadr City, a frequent bombing target. In the wake of the blast, influential Shiite cleric Muqtada al-Sadr, whose support runs deep in the district named after his father, issued a statement Tuesday to his followers, saying the attacks "are the clearest evidence that your government has become unable to protect and provide you with security."

Fighters with al-Sadr's militia, Saraya Salam, deployed to the streets of Sadr city following the bombing, another indication of a lack of confidence in Iraq's official security forces.

In an online statement, the Islamic State group claimed responsibility only for the deadliest bombing of the day, which took place in Baghdad's northeastern Shaab neighborhood and where at least 34 people were killed and 75 others were wounded.

In that attack, a roadside bomb first exploded outside the concrete blast walls surrounding an open-air market, followed by a suicide bomber who blew himself up as people gathered to help the victims of the first explosion, a police officer said.

The IS statement said the attack was carried out by an Iraqi who targeted members of Shiite militias. The Associated Press could not verify the authenticity of the statement but it was posted on a militant website commonly used by extremists.

Later in the afternoon Tuesday, a suicide car bombing hit a crowded outdoor market in Sadr City, killing 18 people and wounding 35 others. Sadr City has been one of the worst-hit districts as the Islamic State group has increasingly employed terrorist attacks against Iraqi civilians far from frontline fighting. The attack came less than a week after a massive truck bomb in a crowded market here killed more than 60 and wounded over 80 on May 11.

Al-Sadr led anti-government protests last month that peaked with the breaching of the Green Zone, the highly fortified compound in the heart of Baghdad that's home to many ministries and foreign embassies. Since then the Iraqi government has been largely paralyzed. Iraqi security officials say they are concerned political instability is distracting from the fight against IS. However, some analysts say the extremist group is launching the attacks at a time of political crisis in an attempt to further delegitimize the Iraqi government.

The uptick in bombings, many claimed by IS, also comes as the group has lost significant chunks of territory to Iraqi ground forces over the past year. As IS loses ground on the front lines, Iraqi and coalition officials say the group is increasingly turning to insurgency-style attacks to distract from their losses.

On the westernmost outskirts of Iraq's vast Anbar province, Iraqi forces entered the town of Rutba, about 240 miles (380 kilometers) west of Baghdad Tuesday. The town sits just south of a key IS-controlled border crossing with neighboring Syria used to ferry fighters and supplies to IS-held territory in Iraq.

If successful, Rutba will be the latest victory for Iraqi forces in Anbar. Last month Iraqi forces took back the town of Hit and in February the provincial capital Ramadi was declared fully liberated from IS.

Tuesday morning, shortly after the Shaab attack, a parked car bomb struck a fruit-and-vegetable market in the Shiite-dominated neighborhood of Dora, in southern Baghdad, killing eight people and wounding 22 others, a police officer said.

That afternoon in northeast Baghdad, a suicide bomber targeted a restaurant in the Habibiya neighborhood, killing nine and wounding 18.

Medical officials confirmed the casualty figures. All officials spoke on condition of anonymity as they were not authorized to talk to reporters.

Commercial and public places in Shiite-dominated areas are among the most frequent targets for the Sunni militants seeking to undermine the Iraqi government efforts to maintain security inside the capital. But the Islamic State has not confined its latest attacks only to Baghdad.

Sunday's spectacular attack in the town of Taji, about 20 kilometers (12 miles) north of Baghdad, saw a suicide car bombing at the facility's main gate, followed by several IS fighters breaking into the plant where they clashed with security forces for hours before the attackers were repelled.

In 2014 after the Islamic State group blitzed across Iraq and declared an Islamic caliphate on the territory it holds in Iraq and Syria, the extremists were estimated to hold nearly a third of Iraqi territory. Since then Iraq's government says the group's hold has shrunk to just 14 percent of Iraq.