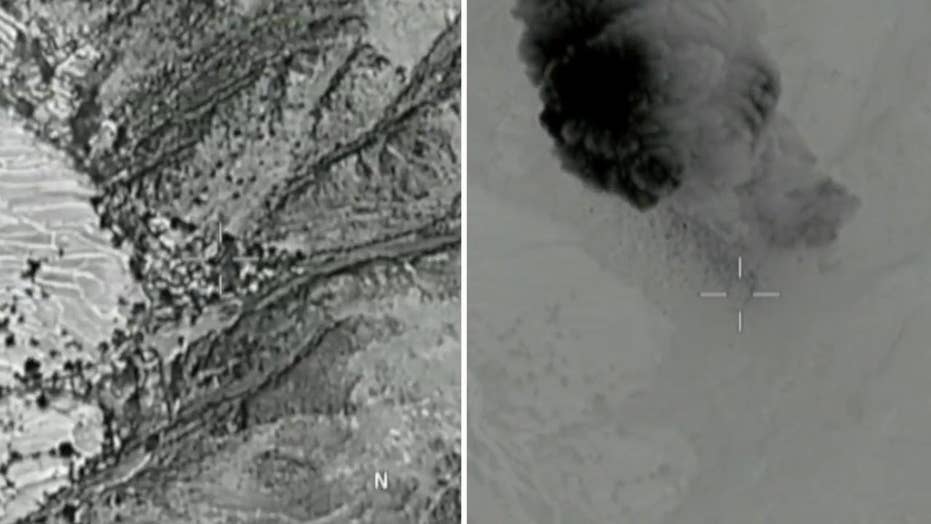 Video released by the Pentagon on Friday showed the “Mother of all Bombs” plummeting from the sky and exploding in eastern Afghanistan, as military officials said it flattened a cave-and-tunnel complex controlled by the Islamic State terror group.

The Department of Defense released the video Friday, less than a day after it dropped the GBU-43/B Massive Ordnance Air Blast (MOAB) atop the Achin district of Nangarhar province, which is close to the Afghan-Pakistan border. Officials said 39 ISIS fighters were killed.

In the 30-second video, the 21,000-pound bomb – the largest non-nuclear weapon in the U.S. military arsenal – could be seen dropping before it exploded midair. Smoke quickly rose from the impact zone, which officials said was more than a mile wide.

The U.S. military headquarters in Kabul said in a statement that the bomb was dropped at 7:32 p.m. local time Thursday.

WHAT IS THE MOAB?

President Donald Trump, who said he authorized the attack, called it a “very, very successful mission.”

Pentagon officials said Friday that the U.S. commander in Afghanistan who ordered the use of the MOAD didn't need Trump's approval.

Officials said Gen. John Nicholson has standing authority to use the largest non-nuclear bomb ever dropped in combat. He had that authority before Trump took office.

"As [ISIS'] losses have mounted, they are using IEDs, bunkers, and tunnels to thicken their defense," Nicholson said in a statement on Thursday. "This is the right munition to reduce these obstacles and maintain the momentum of our offensive against [ISIS]."

The MOAB was first tested in 2003, but hadn’t been used in combat before Thursday.

Ismail Shinwari, the governor of Achin district, said the U.S. attack was carried out in a remote mountainous area with no civilian homes nearby. He said there has been heavy fighting in the area in recent weeks between Afghan forces and ISIS militants.

The U.S. estimates that between 600 to 800 ISIS fighters are present in Afghanistan, mostly in Nangarhar. The U.S. has concentrated heavily on combating them, while also supporting Afghan forces battling the Taliban.