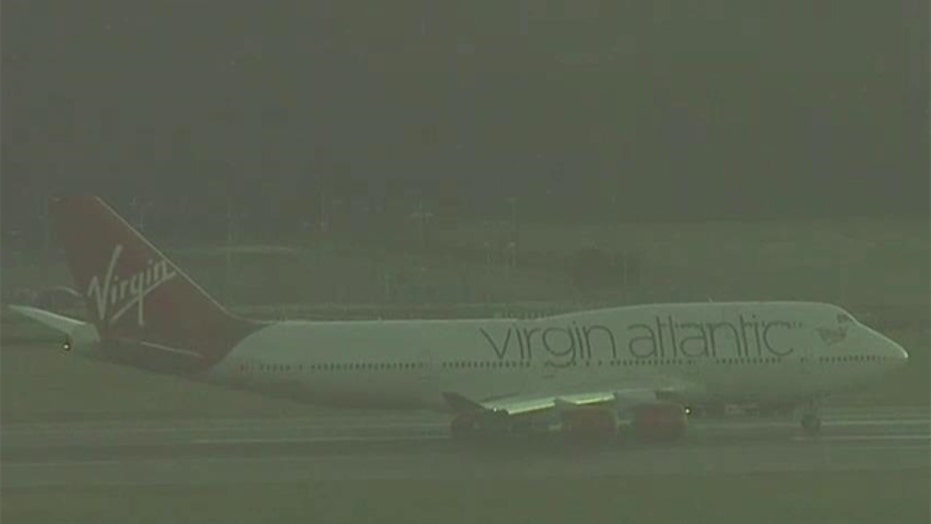 A Virgin Atlantic plane that took off from London’s Gatwick Airport Monday was forced to return to the airport after developing  technical problems with its landing gear and circling airspace above southeast England for four hours.

The Boeing 747 jumbo jet has landed safely at Gatwick in Sussex, England.

Flight VS043 took off from Gatwick late Monday morning, headed for  McCarran International Airport in Las Vegas, when it was forced to turn around.

“The aircraft is preparing to implement a non-standard landing procedure at Gatwick airport,” a Virgin statement said.

A spokesperson for Gatwick airport confirmed the flight’s status. “ In line with standard procedure, emergency services are on standby at the airport purely as a precaution," the unnamed spokesperson told Fox News.

The plane circled southeast England after its right wing landing gear apparently failed to come down, London’s Telegraph reported. Radar information showed the plane turning back shortly after crossing over the north Devon coast. It circled above the Bristol Channel before heading back to the south east where it circled for four hours before successfully landing back at Gatwick.

Experts told Sky News the flight may have been dumping fuel and photos appear to show one of the sets of wheels not fully down.

"The lighter the aircraft is, the slower it can land,"  air traffic control expert Philip Butterworth-Hayes told Sky.

Fire trucks were beside the aircraft and Virgin says they are checking the plane before letting passengers get off.