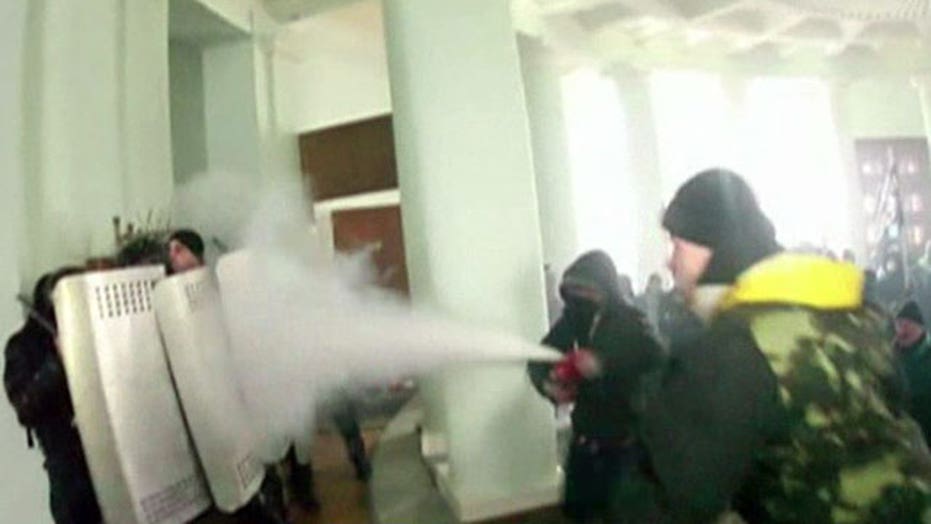 KIEV, Ukraine – Ukraine's beleaguered president on Monday agreed to scrap harsh anti-protest laws that set off a wave of clashes between protesters and police over the past week, a potentially substantial concession to the opposition that stopped short of meeting all of its demands.

In a possibly major sticking point, a proposed amnesty for arrested protesters would not be offered unless demonstrators stopped occupying buildings and ended their round-the-clock protests and tent camp on Kiev's central Independence Square, according to a statement by Justice Minister Elena Lukash on the presidential website.

President Viktor Yanukovych has been under increasing pressure since he pushed the tough laws through parliament, setting of clashes and protests in other parts of the country in a sharp escalation of tensions after weeks of mostly peaceful protests over his rejection of a deal to deepen ties with the 28-nation European Union.

At a meeting between top opposition figures and Yanukovych late Monday "a political decision was made on scrapping the laws of Jan. 16, which aroused much discussion," Lukash said.

She made no mention of a key opposition demand — that Yanukovych resign.

One of the opposition figures, Arseniy Yatsenyuk, turned down the prime minister's job, which Yanukovych had offered him on Saturday, the statement said.

Eliminating the laws, which is likely to be done in a special parliament session Tuesday, appears to be a serious step back for the government. The session is also expected to include a discussion of government responsibility in the crisis, suggesting a cabinet reshuffle could be imminent.

It was not immediately clear how the announcement would be received. On Independence Square, there was no immediate reaction from the relatively small crowd gathered in bitter cold near midnight.

A key issue will be the amnesty offer, which could allow for the release of dozens of protesters currently being held in jail in exchange for an end to the demonstrations.

The statement did not say the opposition would agree to those terms. Doing so could infuriate radical factions within the broad-based protest movement, such as the group called Right Sector that has driven much of the recent violence.

Several hours before the statement, Right Sector issued its own demands, which include punishing officials responsible for the deaths and abuse of protesters, disbanding Ukraine's feared riot police and locating all missing opposition figures.

Three protesters died in the clashes last week, two of whom were shot by hunting rifles, which police insist they do not use.

Protesters have been afraid that authorities were preparing to end the spreading demonstrations by force, but the foreign ministry said earlier the government has no immediate plans to declare a state of emergency.

With protesters now willing to risk injury, a state of emergency would be likely to set off substantial fighting on the streets of the capital.

"Today, such a measure is not on the table," Foreign Minister Leonid Kozhara told journalists.

EU foreign policy chief Catherine Ashton said in a statement that she was alarmed by reports about the government considering a state of emergency and warned that such a move "would trigger a further downward spiral for Ukraine which would benefit no one."

The protesters still occupy three sizable buildings in downtown Kiev, including City Hall. One of the buildings was seized in a spectacular assault early Sunday, when hundreds of protesters threw rocks and firebombs into the building where about 200 police were sheltering. The crowd eventually formed a corridor through which the police left.

Lukash, in a televised statement, noted that protesters seized the building as justice employees were working on the measures to grant amnesty to protesters.

The fears of a state of emergency come after other official statements suggesting the government is considering forceful moves against the protesters.

Interior Minister Vitali Zakharchenko, an official deeply despised by the protesters, on Saturday warned that demonstrators occupying buildings would be considered extremists and that force would be used against them if necessary. He also claimed demonstrators had seized two policemen and tortured them before letting them go, which the opposition denied.

The protests began in late November when Yanukovych shelved the EU deal and sought a bailout loan from Russia. The demonstrations grew in size and intensity after police violently dispersed two gatherings. Demonstrators then set up the large tent camp.

After Yanukovych approved the anti-protest laws, demonstrations spread, including to some cities in the Russian-speaking east, the base of Yanukovych's support.