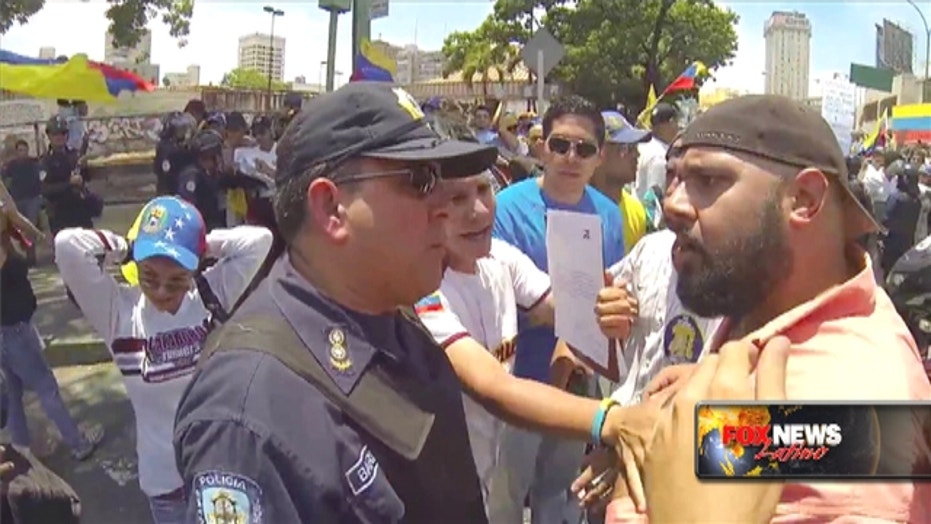 After nearly two months of deadly protests in Venezuela, opposition leaders have agreed to sit down with President Nicolas Maduro's government for talks aimed at solving the crisis. But student protesters, who've been the lifeblood of the anti-government movement, say negotiations will not stop them from continuing to march the streets.

In a video interview from the South American country on Thursday, Aaron Rodriguez, a 24-year-old student protest leader, told Fox News Latino discussions aimed at reconciliation exclude students and the people of Venezuela.

The talks between Maduro and representatives of the opposition began Thursday night. Both sides agreed to hold public talks aimed at reconciliation under the supervision of foreign ministers from Brazil, Colombia and Ecuador, as well as the Vatican's diplomatic envoy in Venezuela. Pope Francis is urging both sides to put aside their differences and to stop the violence.

At least 39 Venezuelans have died during violence clashes between protesters and Maduro's security forces. Both sides blame one another for inciting the violence. Victims include students and security officials and mistrust is still running high.

"These talks doesn't mean that we are going to stop the protests," said Rodriguez, who led a protest last week in Valencia where police were caught on video shooting their shotguns in the air. "There is no reason to stop the protests. The government will keep doing what they're  doing for the last 15 years. The only thing they will do, they will take pictures and show the world. Yeah, they sit with us and talk to us. But the reality in the streets is completely different and that's why we are not sitting in that talk."

Opposition leaders for weeks had resisted Maduro's invitation for dialogue, according to the Associated Press. But they changed course after receiving assurances from visiting South American diplomats that the socialist government is open to discussing a four-point agenda it has put forth as a starting point for talks.

Their proposals include amnesty for jailed government opponents and the creation of an independent truth commission to determine who is to blame for violence and the disarmament of groups loyal to Maduro, the AP reports.

"The leader of us is our people That's our leader. The day we see that there is nobody being murdered on the streets, the day that we see that our people is not making huge line just to buy 1 liter of milk, that day we can say yes we can talk...until we don't see the things coming from the government, not a talk, we want things real, we want to see things on the street."