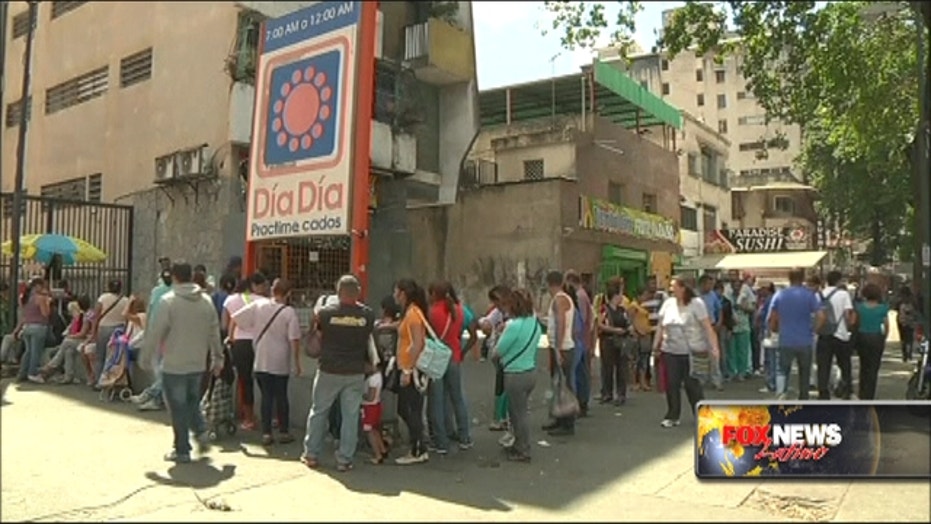 CARACAS, Venezuela (AP) – National guardsmen and state price adjusters fanned out across Venezuela Wednesday to impose a military-style occupation with an unusual goal: Making sure shoppers can buy enough sugar.

The South American country's socialist administration temporarily took over the Dia a Dia supermarket chain as part of a crackdown on the private businesses it blames for worsening shortages and long lines. Embattled President Nicolás Maduro says right-wing owners are purposely making shopping a nightmare by hoarding goods and removing checkout stations. He has promised to jail any business owner found to be fomenting economic chaos.

Two executives of Venezuela's largest drugstore chain, Farmatodo, were detained over the weekend as part of an investigation by price-control authorities.

On Monday night, Congress President Diosdado Cabello said officials had arrested Dia a Dia's owner and taken over its 35 stores "for the protection of Venezuelans." By Tuesday morning, armed soldiers were overseeing lines for bags of sugar at a Dia a Dia location near the presidential palace.

Many economists blame price and currency controls for causing the economic distortions plaguing the country at a time when falling oil prices are battering its revenues. Analysts see this week's moves against business owners as an attempt to drive home Maduro's counter-narrative that the right-wing is waging an economic war.

"The government is starting to prepare for a social explosion," said Diego Moya-Ocampos, an analyst with the London-based consulting firm IHS Global Insight. "They're trying to channel all the social discontent against the private sector."

Many Venezuelans agree with Maduro. Even Dia a Dia branch manager Carlos Barrios said it was possible that his bosses were hoarding. He'd seen the photos government workers had posted outside his store of pallets of sugar, corn flour and toilet paper apparently sitting at the chain's central warehouse.

The administration has a history of temporarily taking control of private enterprises. Just ahead of a key 2013 election, Maduro ordered electronics stores to begin selling goods at give-away prices. But this latest crackdown may reverberate more widely among the business class, because it has added the threat of imprisonment to the always present possibility of expropriation, Moya-Ocampos said.

Adding to the government's woes, some former loyalists are starting to loudly criticize the administration's handling of the shortages. In an interview published Monday, former economy chief Jorge Giordani said the government's refusal to acknowledge the mounting crisis is turning the country into the "laughingstock" of Latin America.

On Tuesday, state workers limited the patrons who could enter Dia a Dia using a system based on government identification numbers. Unlike Farmatodo, which serves patrons across the class spectrum, Dia a Dia caters to lower income shoppers, the bedrock of Maduro's shrinking base of support.

Shoppers who were able to enter the store praised the takeover and rationing system.

"It's a good policy; people need to learn to consume less," said Eli Asar Martínez, who works as an electrician for the local government.

Those on the outside were less enthusiastic.

"Now you're going to have to wait in line for everything. And I still haven't gotten any sugar," Estephanie Ferrera called out as she passed by, prompting cheering from those milling around on the corner.