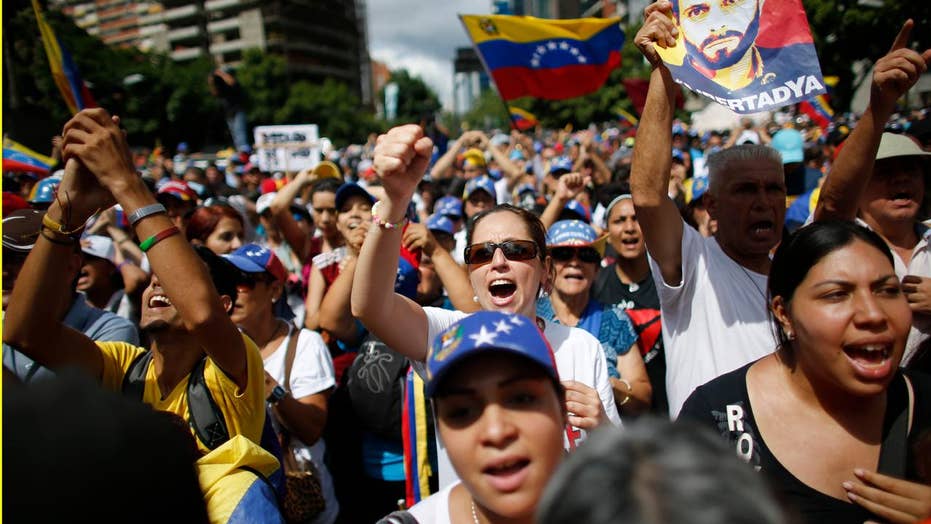 100 days of anti-government protests in Venezuela

CARACAS, Venezuela – Anti-government protests in Venezuela hit the symbolic mark of 100 days on Sunday with a grim record of at least 92 dead and more than 1,500 injured. The decision Saturday to release opposition leader Leopoldo Lopez from prison and place him under house arrest has once again stirred hopes that socialist President Nicolas Maduro and his opponents could sit down for talks aimed at ending the bloodshed.

Here's a look at how one of Latin America's richest nations descended into chaos and the prospects for resolution.

HOW DID THE UNREST BEGIN?

The opposition gained control of the National Assembly in 2015 by a landslide amid mounting frustration with Maduro's handling of the economy, spiraling crime and food shortages. After a year of intense feuding, in late March the government-stacked Supreme Court issued a ruling stripping the legislature of its last powers. The decision was later reversed amid a storm of international criticism but it had already touched off anger among the government's opponents and triggered street protests that still occur almost daily.

Then Maduro did something to anger his opponents even more: He called on May 1 for rewriting Venezuela's constitution. A vote to elect delegates to the special assembly to rewrite the charter is scheduled for July 30. Maduro insists rewriting the constitution is the only way to restore peace, but the opposition views it as a ruse to install a Cuba-like dictatorship. They have called for a symbolic vote of their own on July 16 to reject Maduro's plans.

One reason that mistrust between the government and opposition is running so high is because negotiations last year ended with little to show for them. Those talks were sponsored by the Vatican and a group of former leaders of other nations led by ex-Prime Minister Jose Luis Rodriguez Zapatero of Spain, who helped broker Lopez's release.

To sit down again, the opposition is demanding Maduro honor commitments that it says he made during the previous round of talks, including freedom for political prisoners and a schedule for gubernatorial elections that were postponed last year. It's less clear what the government would bargain for besides an end to the unrest and political cover for some tough measures to get the economy back on its feet. Many also suspect that as Maduro's grip on power weakens he and his inner circle will seek assurances that they won't face prosecution in the event of a transition.

IS THERE A CHANCE OF THE MILITARY INTERVENING?

Last month, a police inspector stole a police helicopter and strafed the Supreme Court and another government building with gunfire and grenades. The surprise attack prompted concerns about a possible uprising by the military, which has traditionally been the arbiter of political disputes in Venezuela.

Since the protests began, more than 100 members of the military are believed to have been jailed for crimes ranging from theft of weapons to rebellion and treason — a high number that suggests the military's support for the government may be wavering.

But while Maduro has repeatedly warned about attempts by what he says are U.S.-backed agents to sow dissent within the military, there so far is little to suggest a mass revolt is underway. The late President Hugo Chavez and Maduro spent years winning over top military brass with bonuses in sought-after dollars, powerful government jobs and patronage.

STATE OF THE ECONOMY

Oil accounts for 96 percent of Venezuela's export earnings and the plunge in world petroleum prices hit the government hard, leaving it owing money across the board, from foreign airlines to oil service companies. But every day Venezuela is paralyzed by protests it digs itself deeper into an economic hole that will be harder for Maduro or his successor to recover from.

The International Monetary Fund forecast the economy will contract 8 percent this year with inflation expected to soar to four digits next year.

Polls say 75 percent of Venezuelans want Maduro gone, but about 20 percent still back him. That is actually similar to the support enjoyed by leaders in Brazil, Chile and Colombia. More importantly, Maduro maintains a tight grip on almost every branch of government and institution, though support within his ruling socialist party is fraying.

The opposition has historically been divided by big egos and had a tough time connecting with poor people who still revere Chavez and his socialist revolution. But the opposition is more united than it has been in recent years. Both hardcore and moderate opposition leaders want to keep up street protests and push for new general elections.