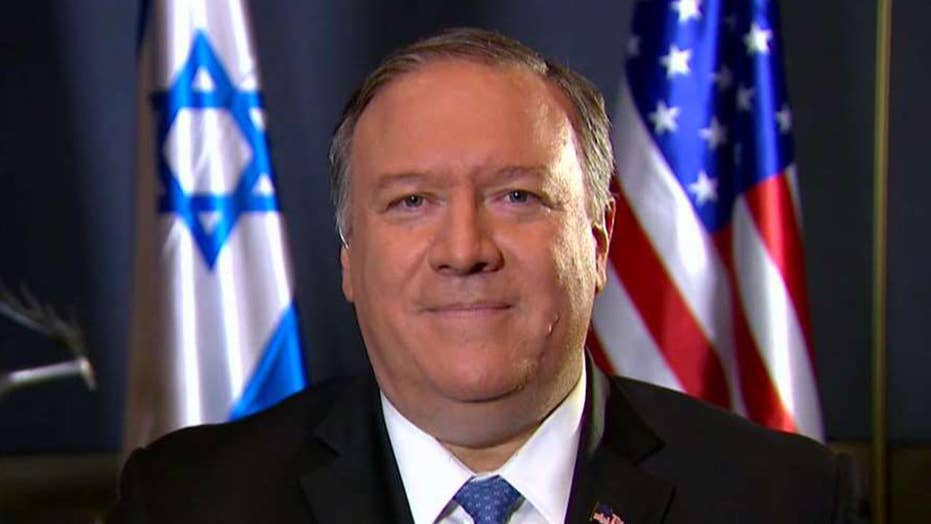 Pompeo: We are committed to helping Venezuela

For the second time this month, Venezuela has been hit by a massive power outage, forcing students and workers to stay home Tuesday.

The outage struck as Venezuelans were still reeling from the last one, which left many of them without access to uncontaminated running water or other basic necessities. The latest blackout affected 21 of the country's 23 states.

As he did with the first outage, President Nicolas Maduro attributed the outage to sabotage by his opponents, including the U.S. government.

"A macabre, perverse plan constructed in Washington and executed with factions of the extreme Venezuelan right," Vice President Delcy Rodriguez declared on state television, describing it as an "electromagnetic" assault.

A man stands outside his home during a power outage in Caracas, Venezuela, Monday, March 25, 2019. A new power outage spread across much of Venezuela on Monday, knocking communications offline and stirring fears of a repeat of the chaos almost two weeks ago during the nation's largest-ever blackout. (AP)

Officials said the "attack" had been controlled, but their assurances, similar to ones the last time around, did little to calm the anger of residents in Caracas who filled traffic-clogged streets as they walked home after subway service in the capital was suspended. Their patience grew increasingly thin when a second outage struck late into the night, leaving neighborhoods pitch black.

On social media, Venezuelans reported outages in Caracas and much of western Venezuela. Some said residents were banging pots and pans in the darkness in a sign of the nation's mounting tensions. The latest outages come as President Nicolas Maduro tries to keep his grip on power amid a revived opposition movement and punishing economic sanctions from the United States.

Twenty-seven-year-old restaurant manager Lilian Hernandez said she was bracing for the worst.

"We Venezuelans suffer all kinds of problems," said Hernandez, who had just recently managed to restock food that spoiled during the previous outage.

People wait inside a darkened office building during a power outage in Caracas, Venezuela, Monday, March 25, 2019. The subway suspended service because of the power cuts Monday, as local media reported outages in at least six states. (AP)

The Trump administration, which has made no secret of its desire to remove Maduro, has denied any role in the outages. Electricity experts and opposition leader Juan Guaido fault years of government graft and incompetence.

"This outage is evidence that the dictator is incapable of resolving the crisis," Guaido wrote on Twitter Monday.

“In the middle of the angst of darkness, when our people need to be assured during another blackout, how can they pretend to keep repeating the same excuses of ‘electrical war and sabotage?” Guaido wrote on his Twitter account. “They’re corrupt liars.”

Meanwhile, as Venezuela's economic and political crisis deepens, many seem resigned to continuous disruptions in their daily routines.