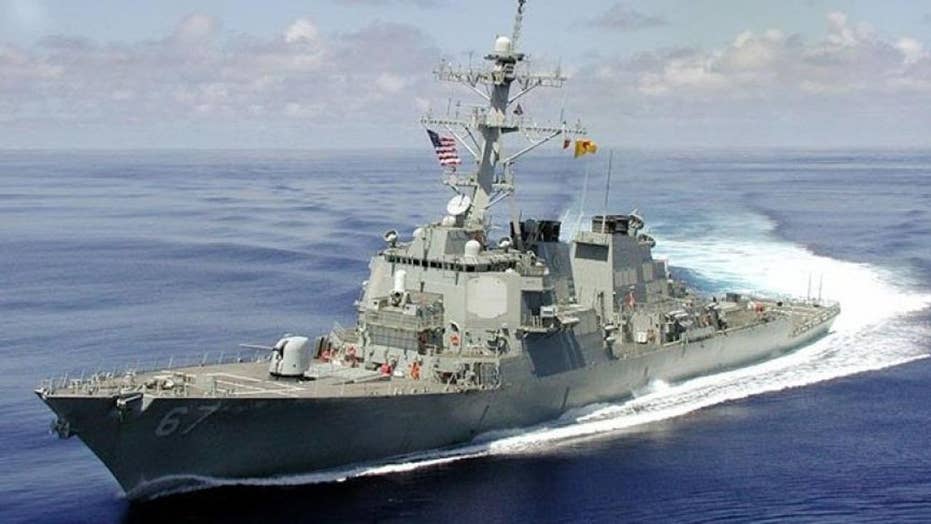 The Navy sent the USS Cole to the Gulf of Aden following an attack earlier this week on a Saudi warship off Yemen by Iranian-backed Houthi rebels, a U.S. defense official told Fox News Friday.

The destroyer is the same warship that suffered heavy damage in an Al Qaeda bombing attack in Yemen in 2000 that killed 17 sailors.

The Navy's move also came as the Trump administration on Friday imposed sanctions on 13 people and a dozen companies in response to Iran's recent ballistic missile test.

Trump tweeted Friday that "Iran is playing with fire - they don't appreciate how `kind' President Obama was to them. Not me!"

The Cole has been sent to an area off Yemen where U.S. warships were attacked in October, resulting in a retaliatory Tomahawk cruise missile strike from a U.S. destroyer against Houthi radar installations in on Yemen’s coastline.

The Pentagon says the Houthis have placed mines in the water 45 miles north of the strategic Bab al-Mandab strait to protect the Yemen port city of Mocha.

Another reason the Cole is being sent to the area is to maintain freedom of navigation in the Red Sea and through the strait, Fox News reports.

President Donald Trump's national security adviser, Michael Flynn, said this week the administration was putting Iran "on notice" for its missile test Sunday and for supporting the Shiite Houthi rebels in Yemen.

The Houthis targeted a Saudi frigate off the coast of Yemen Monday, but the attack may have been meant for an American warship, two defense officials told Fox News.

Two Saudi sailors were killed and three were wounded in the attack. At first the ship was thought to have been struck by a missile.

But based on new analysis of a video showing the attack, American intelligence officials now believe a suicide bomber in a small boat carried out the attack after ramming the side of the Saudi vessel.

In the audio heard on the video, a voice narrating the attack shouts in Arabic, "Allahu akbar [God is great], death to America, death to Israel, a curse on the Jews and victory for Islam."

U.S. defense analysts believe those behind the attack either thought the bomber was striking an American warship or that this was a “dress rehearsal” similar to the attack on the Cole, according to one official.

The attack on the Saudi ship came a day after Trump spoke by phone with Saudi King Salman to discuss setting up safe zones for refugees in Syria and Yemen. Senior U.S. defense officials who spoke with Fox News expressed concern over the attack but said they were confident American warships can defend themselves.

The United States has supported a Saudi-led air campaign against the Houthis in Yemen since 2015.

Navy Chief Petty Officer William "Ryan" Owens was killed and at least three other U.S. service members were wounded in the raid