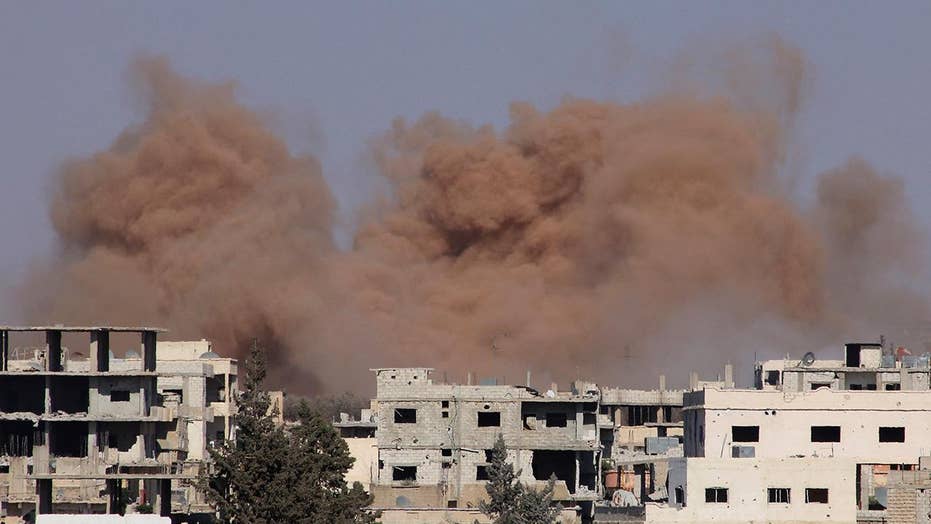 Report: More than 100 Russians killed US airstrikes in Syria

The U.S. struck back with a massive round of airstrikes last week after coming under attack by a battalion-sized pro-Assad unit that many believed contained Russian mercenary contractors; national security correspondent Jennifer Griffin reports from the Pentagon.

A U.S. strike in Syria earlier this month may have killed five Russians, the country’s foreign ministry said Thursday - marking the first time Russians have died at U.S. hands in the Middle Eastern conflict.

The ministry’s spokeswoman, Maria Zakharova, said the five Russians killed in the Feb. 7 clash in the eastern Deir el-Zour province were not military personnel.

The U.S. military responded with overwhelming force in eastern Syria when Russian-backed fighters loyal to Assad began what the Pentagon is calling an unprovoked attack; Jennifer Griffin reports for 'Special Report.'

"According to preliminary information, five people, presumably Russian citizens, may have been killed in combat, the circumstances of which are being clarified," Zakharova said in a briefing. "Some others have been injured, and it's still necessary to check whether they are citizens of Russia or other nations."

It was the first official recognition of Russian deaths in the incident that could further strain Russia-U.S. ties.

Until Thursday, officials for both countries said they had no information on Russian losses in the clash, which came when pro-government forces attacked positions of the U.S.-backed Syrian Kurdish fighters and faced a ferocious U.S. counterattack.

Zakharova wouldn't describe how the Russians died, saying the circumstances of the clash are still being clarified, but her statement amounted to official recognition that the victims were part of the force that advanced on positions of the U.S.-backed fighters.

The Pentagon said the incident was in response to a barrage of artillery and tank fire from several hundred "pro-regime" fighters in Deir el-Zour province, an area in eastern Syria where the last ISIS fighters have converged among oil fields.

Whether by accident or intention, such clashes risk plunging Washington and Moscow into a situation they studiously avoided even during some of the darkest hours of their relationship: their forces directly warring with each other.

The U.S. military has said it maintained contact with the Russian military in Syria before, during and after the Feb. 7 clash. The Russian Defense Ministry insisted its troops weren't involved in the incident, saying 25 Syrian volunteers were wounded in the U.S. strike.

But Russian news media and social networks swirled with reports of the combat, describing how U.S. aircraft decimated Russian private military contractors who sought to take control of an oil factory near Khusham.

Ahead of Thursday’s announcement, Russian media cited unconfirmed claims that overall casualties could have been as high as 200 and Russians could have accounted for the bulk of them. Those claims could not be verified.

Earlier this week, U.S. officials said the Russian government had lodged no complaint about its citizens being killed.

Defense Secretary Jim Mattis, speaking to reporters Tuesday while traveling in Europe, was adamant he knew of no Russian contractors killed in the fighting. He has not commented on the Russian foreign ministry’s remarks Thursday.

U.S. Secretary of State Rex Tillerson is due in Ankara later Thursday to discuss growing tensions between the two NATO allies.

President Vladimir Putin's spokesman, Dmitry Peskov, has said that some Russian citizens could be in Syria but the Kremlin doesn't have any information about them. Pressed by reporters in Thursday's conference call as to whether Putin ordered information about Russian casualties kept from the public, Peskov denied it.