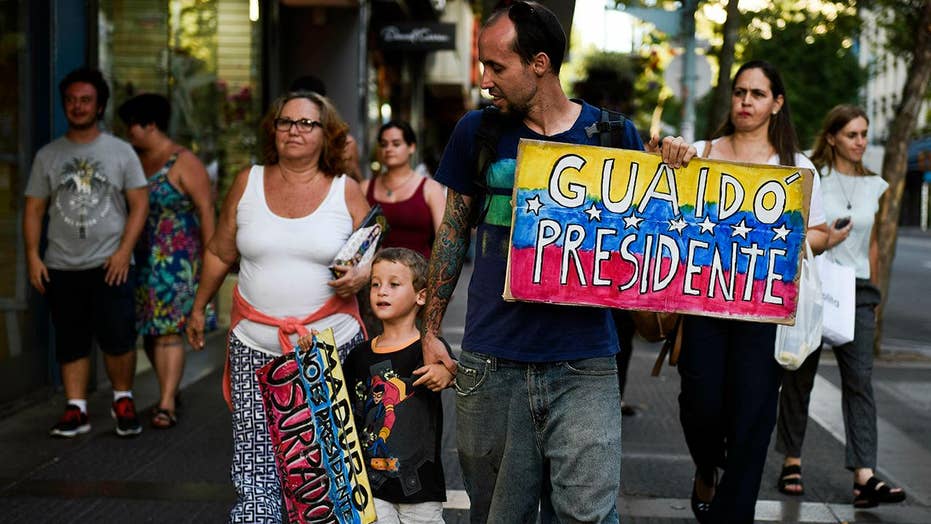 US readies humanitarian aid for Venezuela

Venezuela's opposition leader Juan Guaido is trying to get millions of dollars in humanitarian aid into his country despite a blockade from disputed President Nicolas Maduro; State Department correspondent Rich Edson reports.

The U.S. government says it will position 190 metric tons of supplies by Friday, ready to deploy throughout Venezuela, according to Mark Green, the administrator of the U.S. Agency for International Development (USAID).

The problem is figuring out how to get that aid into Venezuela.

“That really is up to Juan Guaido and his people and his team," Green told Fox News. "We are working with them to try and pre-position that assistance and give them the tools to lead their people and provide hope.”

Pallets of food, medicine and hygiene kits are in neighboring Colombia and warehouses throughout the region.

"This not an earthquake. This is not a hurricane.  This is not a tornado or a flood,” Green said. “This is one man and one regime imposing dictatorial rule, imposing suffering and pain on people."

"This not an earthquake. This is not a hurricane.  This is not a tornado or a flood. This is one man and one regime imposing dictatorial rule, imposing suffering and pain on people."

Green said he’s coordinating with the Colombian government to ensure that Guaido, the opposition leader, has the aid his country needs -- though he said the next step is up to Guaido.

Guaido is organizing aid caravans to try to cross Saturday into Venezuela, potentially setting up a confrontation with the Venezuelan military.

The day before Guaido’s caravans leave for Venezuela, billionaire Richard Branson says he’s organizing a benefit concert to fund more aid for Venezuelans. Branson told the Associated Press that he’s trying to raise $100 million from viewers who would pay to watch it streamed on the internet.

Also on Friday, and on the other side of the Colombia/Venezuela border, Maduro’s government has announced a competing concert, calling it “Hands Off Venezuela.”