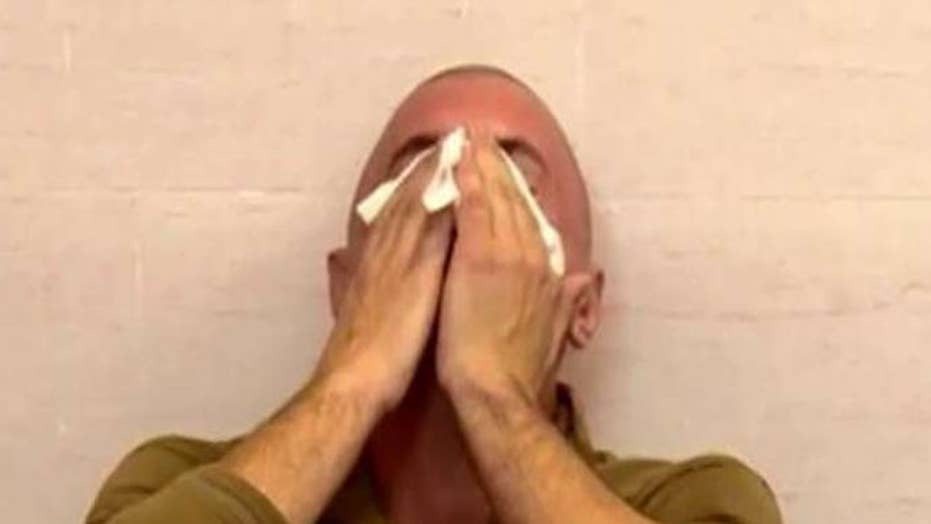 Iran releases video of US sailor crying after capture

Iranian state TV showed video Wednesday of one of 10 captured U.S. Navy sailors in tears while the group was being held by the country's Revolutionary Guard last month.

The footage, which was shown on the official Islamic Republic of Iran News Network, was condemned by the Navy, who called the sailors' captivity "outrageous and unacceptable."

On Thursday, social media users reported that the sailors' capture was being re-enacted as part of celebrations marking the anniversary of the 1979 Islamic revolution that ousted the U.S-backed Shah.

The sailors were held for approximately 16 hours after two small vessels drifted into Iranian territorial waters in the Persian Gulf Jan. 12. The so-called riverine command boats were attempting to travel from Bahrain to Kuwait.

The sailors did not appear to be physically harmed when they were released. However, Hossein Salami, a Revolutionary Guard commander, told state TV last month that the sailors had "started crying" after they were arrested.

Shortly after the sailors' release, state TV aired a statement from one crew member apologizing for entering Iranian waters and praising their captors for "your hospitality and your assistance."

In an extensive statement Wednesday, Cmdr. Kevin Stephens, spokesman for Naval Forces Central Command, said the Iranians should have escorted the riverines into international waters and offered assistance for mechanical issues, if necessary.

"Professional mariners understand that it is a duty and obligation to assist other mariners who suffer mechanical problems or who find themselves off track at sea," Stephens said, according to Navy Times. "We are grateful diplomacy worked at the end of the day, but it would never have come to that had the Iranian maritime forces involved behaved professionally and responsibly."

Earlier footage broadcast by Iran showed the American sailors surrendering to Iranian forces on their knees. Despite thanking his Iranian counterpart, Foreign Minister Javad Zarif, for helping to secure the sailors' release, Secretary of State John Kerry told Fox News Jan. 28 that the video angered him.

"I was furious about it, and I immediately contacted my counterpart and we indicated our disgust," Kerry said. "It was very, very unfortunate, inappropriate. And as a former sailor, and member of the military, I was infuriated by it and I expressed that very directly to my counterpart."