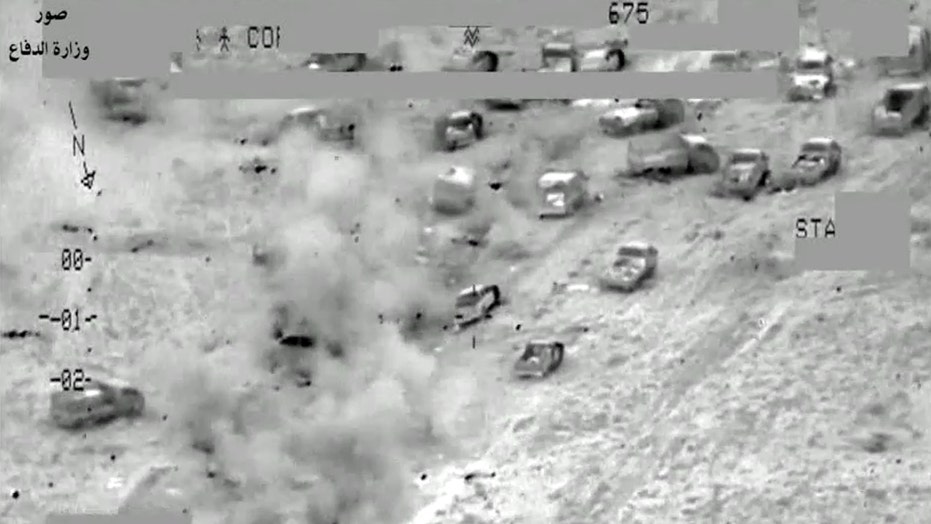 The first convoy was spotted southwest of Fallujah in an area with known ISIS influence, according to Garver. Iraqi Security Forces fought the militants on the ground, he said, before coalition strikes destroyed some 55 vehicles.

Reuters was first to report the air assault.

Following territorial losses, ISIS often turns to increased militant attacks in and around Baghdad. On Thursday, police said separate attacks targeting commercial areas in the Iraqi capital killed at least 12 civilians. The deadliest was in the southwestern neighborhood of Shurta al-Rabia where a suicide bomber blew himself up in an outdoor market, killing seven people and wounding at least 15.

Medical officials confirmed the casualty figures. All officials spoke on condition of anonymity as they were not authorized to release information.

No group has claimed responsibility for the attack, but it bore the hallmarks of ISIS.

Also Thursday the U.N. children's fund warned that the ISIS surge in Iraq and the military operation to route the extremist group from captured territory have had a "catastrophic impact," with some 4.7 million Iraqi children in need of humanitarian assistance.

UNICEF warned that 3.6 million Iraqi children are at "serious risk" of death, injury, sexual violence, abduction and recruitment into armed groups, and called on warring parties in Iraq to protect their rights. It said that the number of children in Iraq at serious risk of death or wartime exploitation had increased by 1.3 million in the past 18 months.

"Children in Iraq are in the firing line and are being repeatedly and relentlessly targeted," said Peter Hawkins, UNICEF's Iraq representative. "We appeal to all parties for restraint and to respect and protect children.  We must help give children the support they need to recover from the horrors of war and contribute to a more peaceful and prosperous Iraq."

The airstrikes come roughly 24 hours after the triple suicide bombing at Istanbul's Ataturk Airport that killed more than 40 people. ISIS is considered the prime suspect, according to top U.S. officials.

Earlier this month, Brennan told Congress that the U.S. battle against the Islamic State had not yet curbed the group's global reach and that the terrorists were expected to plot more attacks on the West and incite violence by lone wolves.

He said ISIS had a large cadre of Western fighters who could potentially act as operatives for attacks in the West.