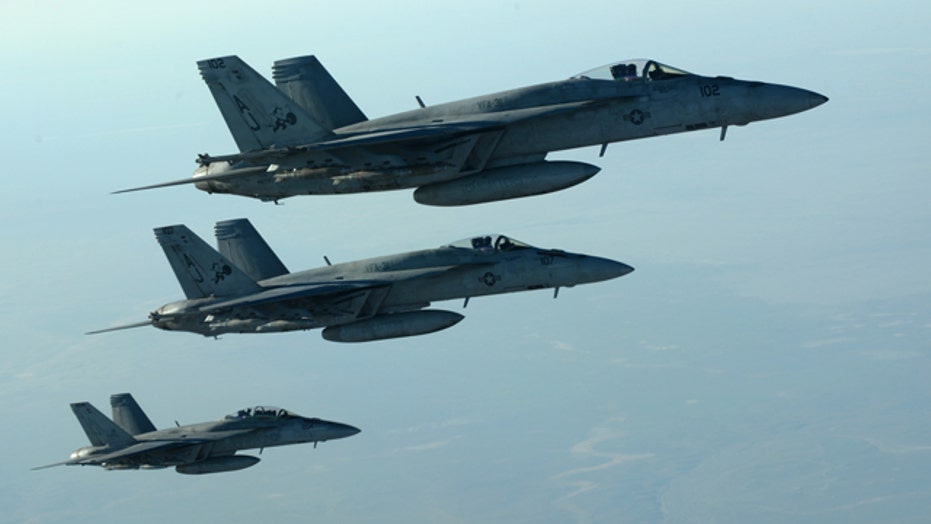 Jennifer Griffin reports on new round of airstrikes

The U.S. and Arab allies unleashed a new round of airstrikes against Islamic State militants in eastern Syria late Wednesday, targeting a dozen small oil refineries.

U.S. officials told Fox News the latest round of strikes was designed to hit so-called “modular oil refineries” -- essentially small, ISIS-built refineries that the terror group uses to fuel its vehicles and to fund its operations.

“This is not going to look like the oil fields burning in Iraq,” one official said, referring to the Gulf War.

A Department of Defense official said ISIS made roughly a $2 million-a-day profit from the modular oil refineries, which produced 300 to 500 barrels a day.

Officials said all the aircraft made it back safely from the strikes.

The Britain-based Syrian Observatory for Human Rights and two activist groups told the Associated Press that at least four oil installations and three oil fields were hit around the town of Mayadeen in the eastern province of Deir el-Zour. A third activist group loyal to the militants confirmed the reports.

The Observatory also claimed that the strikes killed at least 14 militants, as well as another five people who lived near one of the refineries in the northeastern Hassakeh province. The Observatory added that those five were likely the women and children of the militants.

The planes came "with a terrifying sound and red lights before the explosions," one activist wrote, documenting each explosion.

Meanwhile, activists in the city of Raqqa in northeastern Syria said that militants had freed at least 150 people from a prison, fearing new strikes there.

The U.S. Central Command said in a statement that partner nations in the mission included Saudi Arabia and the United Arab Emirates and the 13 airstrikes were conducted by both piloted aircraft and drones. Initial indications were the strikes were successful, the statement said.

U.S. officials said the goal was to leave the refineries largely intact, so they eventually could be used again, but to destroy the support facilities used by ISIS.

Other strikes hit checkpoints, compounds, training grounds and vehicles of the Islamic State throughout the territory they hold along the Euphrates River in northern and eastern Syria, with strikes hitting near the Turkish and Iraqi borders.

The raids targeted Syrian military bases seized by the Islamic State group, including the Brigade 93 and Tabqa bases. They also hit a building used as an Islamic court and a cultural center in the town of Mayadeen, the activists reported.

The Observatory said other airstrikes targeted the Nusra Front, a Syrian Al Qaeda affiliate that has battled the Islamic State, and which is one of the most powerful groups fighting to overthrow Syrian President Bashar Assad. The strikes against the Nusra Front suggest a wider operation targeting other Syrian militants seen as a potential threat to the United States.

It was not immediately clear where the strikes against the Nusra Front took place.

The Observatory also reported airstrikes near a northern Kurdish area that Islamic State militants have been attacking for nearly a week now, causing the flight of more than 150,000 people to neighboring Turkey. But it was not immediately clear who was conducting the airstrikes southwest of the area known as Kobani, or Ayn Arab.

A senior Kurdish fighter, Ismet Sheikh Hasan, said there were three airstrikes on the outskirts of Kobani overnight, but that fighters were not able to approach the area to see the target of the strikes.

Elsewhere in Syria, forces loyal to President Bashar Assad wrested back a rebel-held industrial area near Damascus after months of clashes, according to the Observatory and pro-Assad Lebanese media.

The pro-government forces seized the Adra industrial zone after rebels accused them of using chemical explosives on Wednesday. Footage of the wounded from the incident, in which six people were killed, showed men jerking uncontrollably and struggling to breathe before they died.

The U.S.-led campaign in Syria has drawn a mixed response from the country's multitude of rebel brigades, many of whom cooperate with the Nusra Front and have been locked in a deadly fight with Islamic State militants since January. But the rebels' ultimate goal is to topple Assad, while the U.S. is focused on defeating the Islamic State group.