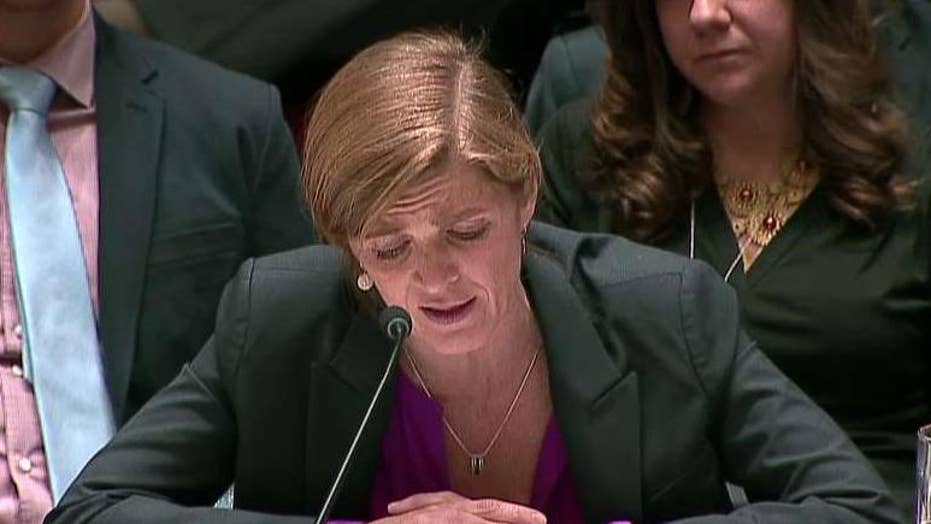 US abstains in UN vote on Israeli settlements

A "shameful" abstention by the U.S. in a United Nations vote Friday allowed passage of a resolution condemning Israeli settlement expansion in the occupied West Bank.

The UN Security Council resolution was put forward by four nations a day after Egypt withdrew it Thursday under pressure from Israel and U.S. President-elect Donald Trump. Failure by the U.S. to veto the measure was seen as a double-cross of America's key Middle Eastern ally, and attributed directly to outgoing President Barack Obama, who has had chilly relations with Israel throughout his eight-year tenure.

Reaction from U.S. Republicans and Jewish leaders around the world was swift and sharp.

"It was to be expected that Israel's greatest ally would act in accordance with the values that we share and that they would have vetoed this disgraceful resolution," said Israel's Ambassador Danny Danon. "I have no doubt that the new U.S. administration and the incoming UN Secretary General will usher in a new era in terms of the UN's relationship with Israel."

"This is absolutely shameful," Ryan said. "Today's vote is a blow to peace that sets a dangerous precedent for further diplomatic efforts to isolate and demonize Israel."

Minutes after the vote, Trump took to Twitter to express his opposition.

"As to the U.N., things will be different after Jan. 20th," Trump tweeted.

Anne Bayefsky, director of the Touro Institute on Human Rights and the Holocaust and president of Human Rights Voices, said the contention that settlements, and not Palestinian terrorism, is the obstacle to peace is false.

The measure was adopted with 14 votes in favor, to a round of applause, after U.S. Ambassador Samantha Power abstained. It is the first resolution the Security Council has adopted on Israel and the Palestinians in nearly eight years.

"The resolution is too narrowly focused on settlements when we all know, or all should know" there are other factors that contribute to the conflict between Israel and Palestinians, Power said in an explanation for why the U.S. chose to sit on the fence, which ensured passage of the resolution.

The Obama White House, under heavy pressure from the Israeli government and its supporters to veto the resolution, kept everyone guessing until the vote whether it would stop shielding Israel from council resolutions and permit it to pass by abstaining.

After the vote, White House officials acknowledged on a conference that Obama made the decision himself after several rounds of discussions with top administration officials.

As for Trump, deputy National Security Adviser Ben Rhodes pointedly said there’s only one president at a time – and that the Obama administration was concerned the Israelis’ pace of settlement activity could put the viability of a two-state solution at risk.

Israel believes it has the right to expand settlements in the disputed territories as populations within them expand. Palestinians do not believe the settlements should exist at all, and world condemnation of expansion is seen as a possible first in that direction.

The resolution, warning that Israeli settlement expansion is “steadily eroding the two-state solution and entrenching a one-state reality,” calls on Israel to “immediately and completely cease all settlement activity in occupied territories, including East Jerusalem.” It repeated the longstanding UN position that all settlements on land Israel conquered in 1967 are illegal under international law.

A senior Israeli official accused the U.S. of a "shameful move" after learning that it did not intend to veto the text, the BBC reported.

The U.S., which has veto power as one the council five permanent members of the council, has traditionally sheltered Israel from condemnatory resolutions. But the Obama administration has long made clear its opposition to Israeli settlement-building in occupied territory and there had been speculation that in its final month it might allow a resolution against settlements to pass at the U.N.

A senior Israeli official told The Associated Press: "President Obama and Secretary [of State John] Kerry are behind this shameful move against Israel at the U.N.

"The U.S. administration secretly cooked up with the Palestinians an extreme anti-Israeli resolution behind Israel's back which would be a tail-wind for terror and boycotts and effectively make the Western Wall [the Jewish holy site in the Old City of Jerusalem] occupied Palestinian territory.”

Most of those critical of the move by the U.S. painted it as a stab in Israel's back delivered by Obama.

“This last minute political maneuvering is shameful," said Ric Grenell, former spokesman for the U.S. Mission to the UN and a Fox News contributor. "It is inconsistent with the long standing U.S. policy that no country or organization should be dictating solutions on the two parties.

"Today’s abstention by the Obama Administration will make it harder to find a peaceful solution because it imposes outside positions on Israel without letting them negotiate directly,” he added.

Wael Abu Youssef, a senior member of the Palestine Liberation Organization, told Reuters that Netanyahu's government "must not be rewarded" by the initial withdrawal of the draft resolution.

The resolution, although it reiterates long-held U.N. policy, could be more than symbolic. While it does not call for imposing sanctions on Israel, its language could hinder Israel's negotiating position in future peace talks. Given the widespread international opposition to the settlements, it would  be nearly impossible for the Trump administration to reverse it.