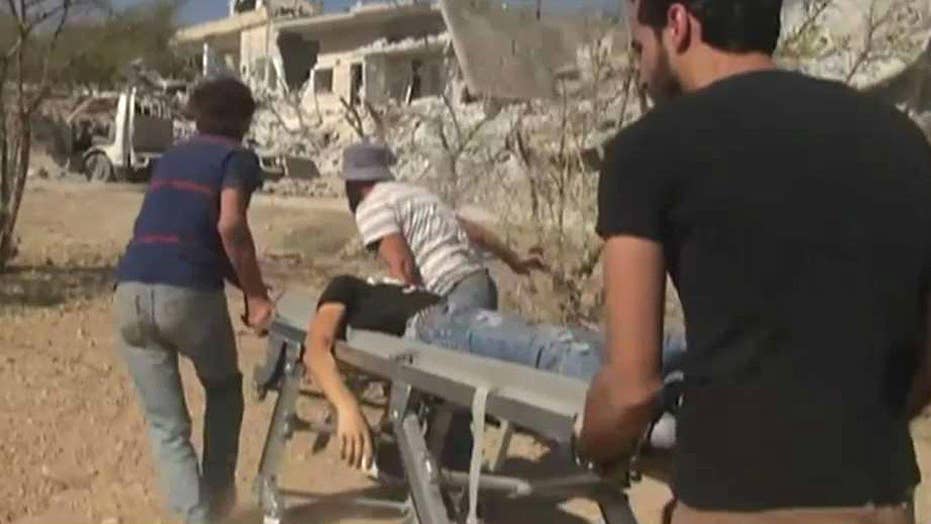 Deadly airstrike outside school in Syria

Many children reportedly dead in attack

WASHINGTON – Sixty-four civilians were killed and eight were injured in 24 U.S.-led coalition airstrikes against Islamic State militants in Iraq and Syria over the past year, the U.S. military said Wednesday, based on newly completed investigations.

The latest totals bring the number of civilians killed in airstrikes in the fight against the Islamic State group to 119, with another 37 injured, according to U.S. Central Command.

Col. John Thomas, Central Command spokesman, said the investigations concluded that the proper military process was followed in each incident and precautions are always taken to try to avoid any civilian deaths.

Independent monitoring groups and activists, however, have repeatedly said that coalition and other airstrikes have killed hundreds of civilians.

The cases announced Wednesday include strikes from last November through September. And they range from one or two civilians killed to a March strike near Mosul, Iraq, that killed 10 civilians.

The latest report, however, doesn't include two air attacks in Syria in recent months that may have each killed dozens. According to residents and international aid groups, an airstrike in July near Manbij, Syria, may have killed at least 56 civilians and wounded many more.

And a U.S. brigadier general has been appointed to lead an investigation in a September airstrike near Deir el-Zour, Syria, that may have unintentionally killed dozens of Syrian government forces.

The U.S. has said that it monitored the target for two days and deemed it valid before launching the strike. But it was halted when Russian officials called the coalition to say the attack was hitting personnel and vehicles that were part of the Syrian military.

There have been lingering questions about reports that the troops or people on the ground were not wearing uniforms and that they were armed, leading to confusion about who they might be. Other theories suggest they may have been conscripted troops or prisoners of some sort, but there have been no solid findings yet on those reports.

As of Wednesday, U.S. Central Command has received 257 allegations of airstrikes causing possible civilian casualties, and has concluded that 76 of the reports were valid and required further investigation. Of those 76, four were duplicates.

To date, 65 of the investigations have been completed, and about half of them have been publicly disclosed. Seven allegations remain open.