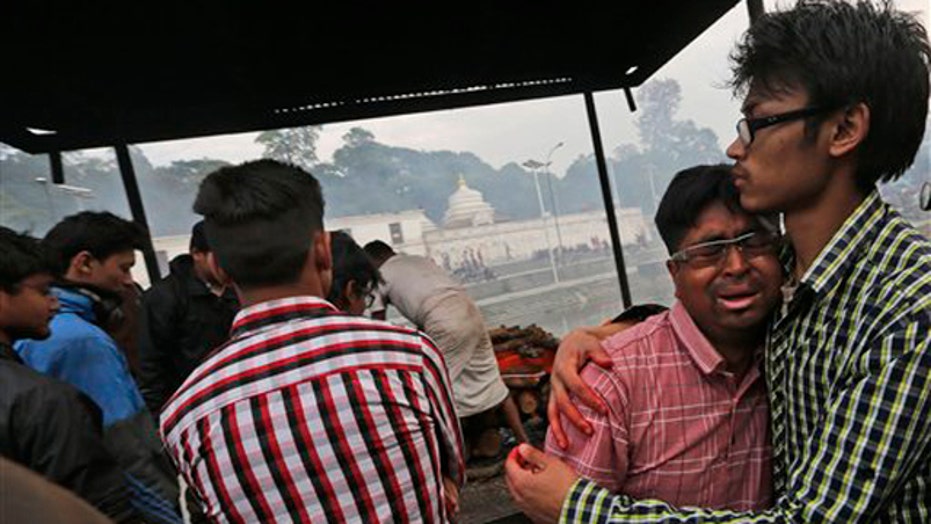 A look at the aftermath of the Nepal earthquake

State Department: Four Americans among more than 4,000 killed in quake

More than 1.4 million people affected by Saturday's devastating earthquake in Nepal are in need of food assistance, a United Nations spokesman said Monday.

Citing Nepalese government figures, U.N. spokesman Farhan Haq said an estimated 8 million people had been affected by the magnitude-7.8 quake in 39 of Nepal's districts. He added that the United Nations was releasing $15 million from its central emergency response fund for quake victims. The funds will allow international humanitarian groups to scale up operations and provide shelter, water, medical supplies and logistical services.

Trucks carrying food were on their way to affected districts outside the hard-hit and densely-populated Kathmandu valley, and distribution of the food was expected to start Tuesday.

The death toll from the earthquake could reach 10,000, Nepal's prime minister said Tuesday.

"The death toll could go up to 10,000 because information from remote villages hit by the earthquake is yet to come in," Sushil Koirala told Reuters.

Meanwhile Tuesday, helicopters crisscrossed the skies above the high mountains of Gorkha district near the epicenter, ferrying the injured to clinics, and taking emergency supplies back to remote villages devastated by the disaster that killed more than 4,600 people across the region.

Around noon, two helicopters brought in eight women from Ranachour village, two of them clutching babies to their breast, and a third heavily pregnant.

"There are many more injured people in my village," said Sangita Shrestha, who was pregnant and visibly downcast as she got off the helicopter. She was quickly surrounded by Nepalese soldiers and policemen and ushered into a waiting van to be taken to a hospital.

The little town of Gorkha, the district's administrative and trading center, is being used as a staging post to get rescuers and supplies to those remote communities. Some villages were reachable only by air after landslides blocked mountain roads.

Some women who came off the helicopters were grimacing and crying in pain and unable to walk or speak, in agony three days after being injured in the quake.

Sita Karki winced when soldiers lifted her. Her broken and swollen legs had been tied together with crude wisps of hay twisted into a makeshift splint.

"When the earthquake hit, a wall fell on me and knocked me down. My legs are broken," she said.

After an hour of dark clouds gathering and threatening rain, the wind kicked up in Gorkha and sheets of rain began to pour down.

Geoff Pinnock of the U.N.'s World Food Program was leading a convoy of trucks north toward the worst affected areas when the rain began to pound, leaving them stuck.

"This rain has caused a landslide that has blocked my trucks. I can maybe get one truck through and take a risk driving on the dirt, but I think we'll have to hold the materials back to try to get them out tomorrow by helicopter," he said.

Heavy snow in the region also caused an avalanche and mudslide Tuesday in the isolated village of Ghodatabela, leaving 250 people missing, officials said.

The village, about a 12-hour walk from the nearest town, is along a popular trekking route, but it was not clear if the missing included trekkers.

Aid workers who had reached the edges of the epicenter described entire villages reduced to rubble.

"In some villages, about 90 percent of the houses have collapsed. They're just flattened," said Rebecca McAteer, an American physician who rushed to the quake zone from the distant Nepal hospital where she works.

And yet, the timing of the earthquake — near midday, when most rural people are working in the fields — meant most villagers were spared injuries when buildings collapsed, she said. So far, police say they have 373 confirmed deaths in the Gorkha district.

Most those injured, she added, were young people and the elderly, since most young men long ago left their villages in search of better-paying work.

"The immediate need is getting support to where it's needed, but there will be a lot of work rebuilding," said McAteer, who was heading back soon to the center of the quake zone.

Thomas Meyer, an engineer with the International Nepal Fellowship who accompanied McAteer to the devastated villages, noted the disaster's aftermath would stretch long into the future.

"This is a long-term emergency," he said. "This will need major attention for the next five years. People have nothing left."

Across central Nepal, including in Kathmandu, the capital, hundreds of thousands of people are still living in the open without clean water or sanitation. It rained heavily in the city Tuesday, forcing people to find shelter wherever they could.

At Kathmandu airport, flights arrived with emergency aid and helicopters brought in both foreign trekkers and local Nepalese villagers from quake-struck areas. Nepal's economy relies heavily on tourism and trekking, including near Mount Everest, the world's tallest.

Dave Gordon, a trekker from San Francisco, California, said he was in the area until Tuesday waiting for the rescue flight.

"Cliffs came down, four or five porters were deceased, buried in the rock fall," he said of the quake. "Trails are completely destroyed. People are stuck. They can't get out. It was very bad."

Buildings in parts of Kathmandu were reduced to rubble, and there were shortages of food, fuel, electricity and shelter. As bodies were recovered, relatives cremated the dead along the Bagmati River, and at least a dozen pyres burned late into the night.

Many of the ornate, historic buildings in Bhaktapur, a key tourist site just east of Kathmandu, collapsed. Residents began returning to collect whatever belongings they could.

The country's confirmed death toll rose to 4,680, said police Inspector Sharad Thapa at the Nepal Police Control Room in Kathmandu. Another 61 were killed in neighboring India, and China's official Xinhua News Agency reported 25 dead in Tibet. At least 18 of the dead were killed at Mount Everest as the quake unleashed an avalanche that buried part of the base camp packed with foreign climbers preparing for summit attempts.

Some 8,063 people have been injured, Bam said. Tens of thousands are believed to be homeless.

Rescue workers and medical teams from at least a dozen countries were helping police and army troops in Kathmandu and surrounding areas, said Maj. Gen. Binod Basnyat, a Nepal army spokesman. Contributions came from large countries like India and China — but also from Nepal's tiny Himalayan neighbor of Bhutan, which dispatched a medical team.

Medical and rescue teams from Russia, Japan, France, Switzerland and Singapore were expected in Kathmandu over the coming days, the Nepal army said.