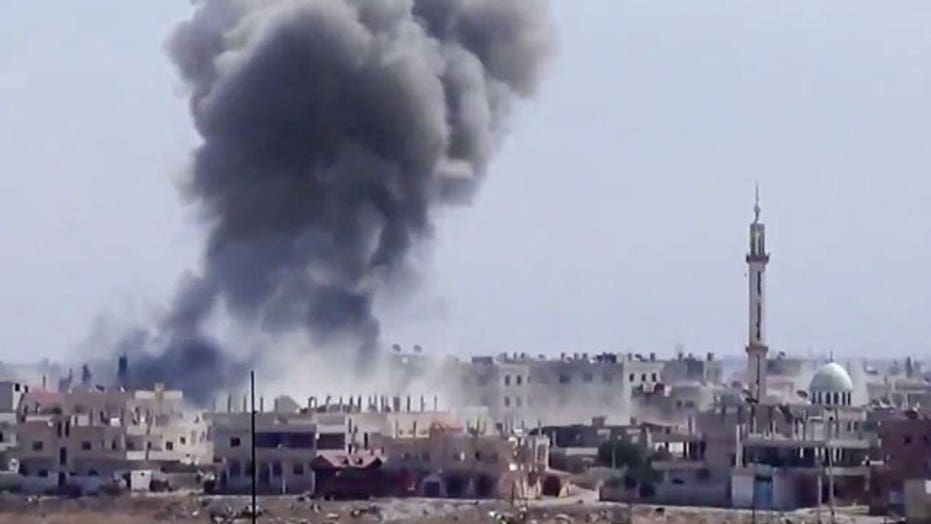 Report: US fears Syria could use more chemical weapons

United Nations experts were in the eastern suburbs of Damascus Thursday for a third day of inspections of areas struck by a purported chemical weapons attack, as Syrian President Bashar Assad said that his country "will defend itself against any aggression," signaling defiance to mounting Western warnings of a possible strike.

Chemical weapons inspectors toured stricken rebel-held areas, ahead of a weekend departure that could clear the path for military action against Syria.

All the evidence gathered by the U.N. team will be brought to the Hague, Netherlands, where it will be separated into categories in an Organization for the Prohibition of Chemical Weapons (OPCW) laboratory. Samples will then be sent to undisclosed, OPCW-designated and certified laboratories in Europe for analysis. The U.N. refuses to disclose where the labs are located, apparently to safeguard the integrity of the investigation.

The evidence will be transported to the Hague inside special OPCW containers that are sealed for safety and to ensure that the samples themselves are not compromised. Chain of custody during the transportation process is said to be impeccable, with state of-the-art logging and chronicling of every step taken.

U.N. Secretary-General Ban Ki-moon urged Western powers to hold off on any decisions until his experts can present their findings to U.N. member states and the Security Council.

Ki-moon will be given a briefing by the head of the inspection team, “in the coming days,” a U.N. spokesman told Fox News.

A formal written report could take many days and up to a couple of weeks.

The Syrian regime has denied a role in the attacks, suggesting instead that anti-government rebels carried them out to frame Assad.

The Syrian president struck a tough tone Thursday. His comments, from a meeting with a delegation from Yemen, were reported by the state news agency SANA.

"Threats to launch a direct aggression against Syria will make it more adherent to its well-established principles and sovereign decisions stemming from the will of its people, and Syria will defend itself against any aggression," Assad said.

It's not clear if Assad would retaliate for any Western strikes or try to ride them out in hopes of minimizing the risk to his own power.

Already, the conflict has sparked growing anxiety among civilians in neighboring countries.

Israelis stood in long lines Thursday for government-issue gas masks. Turkey's government crisis management center said officials had designated bunkers at seven areas along the border. And Lebanon's foreign minister, Adnan Mansour, warned that international military action against Syria would pose a "serious threat" to the security and stability of the region, particularly in Lebanon.

In one of the videos, the inspectors stood next to their U.N. vehicles, and the accompanying caption indicated Thursday's date and the location. In another video, the U.N. convoy was seen driving through a street, accompanied by armed rebels in pickup trucks.

On two previous tours this week, the inspectors visited a western suburb of the city as well as Zamalka where they took biological samples from suspected victims.

Israel has called up reservists and deployed missile defense batteries in preparation for a possible Syrian response to an American attack.

In Turkey, the government's crisis management center said on Twitter that a team of 100 chemical weapons experts were sent to the border area, which was being screened for any signs of chemical attacks.

Turkey is Assad's strongest critic and has backed Syria's opposition and rebels. The country said this week it would take part in any international coalition that would move against the Syrian government.

Fox News’ Jonathan Wachtel and The Associated Press contributed to this report.