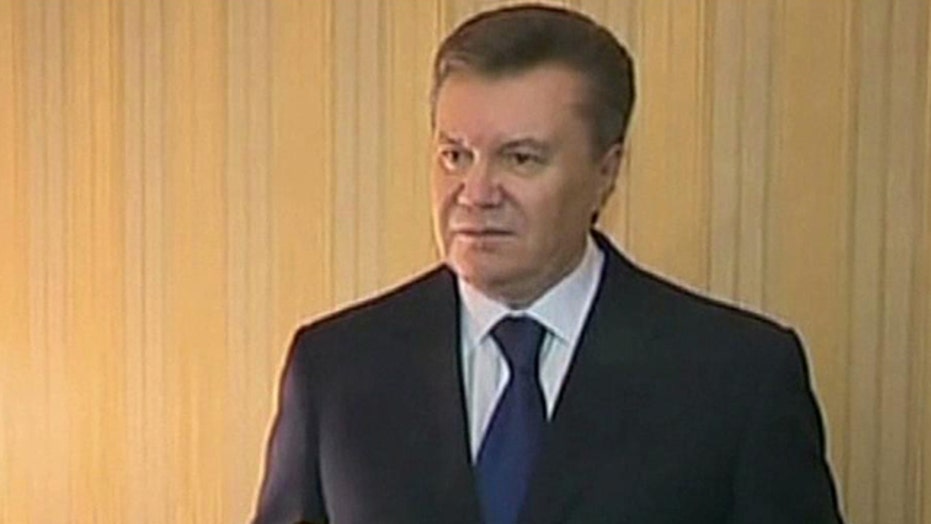 The Ukrainian parliament voted to set early elections for May 25 after declaring President Viktor Yanukovych unable to carry out constitutional duties.

The decision comes just hours after embattled Yanukovych said he wouldn't respect any decisions made by parliament.

Yanukovych stated Saturday that he has no intention to resign, and called the political crisis a coup while saying it resembles the rise of the Nazis in the 1930s.

"They are trying to scare me. I have no intention to leave the country. I am not going to resign, I'm the legitimately elected president," Yanukovych said from Kharkiv in a televised statement.

"Everything that is happening today is, to a greater degree, vandalism and banditry and a coup d'etat," he said. "I will do everything to protect my country from breakup, to stop bloodshed."

Parliament also arranged the release of Yanukovych's arch-rival, former Prime Minister Yulia Tymoshenko, by voting to decriminalize the count under which she was imprisoned. Tymoshenko was convicted of abuse of office, charges that domestic and Western critics have denounced as a political vendetta.

A party spokeswoman said Tymoshenko was released after 2 1/2 years in a Kharkiv prison, and headed to the capital to join protesters there.

"You are heroes, you are the best thing in Ukraine!" she said of those killed in the violence, while speaking for a wheelchair.

Asked by crowds gathered at the hospital where she was released about her further plans, Tymoshenko said, "I will run for president," news agencies reported.

She said she will "make it so that no drop of blood that was spilled will be forgotten."

The agreement reached Friday between Yanukovych and leaders of the opposition protests that have brought Ukraine into crisis called for early elections that were to be held no later than December, and constitutional reforms to reduce the president's powers.

But the possibility that he could remain in office for the rest of the year angered protesters who want his immediate departure, and said the deal did not address what triggered the protests in November -- Yankuvych's abandonment of closer ties with the European Union in favor of a bailout deal with longtime ruler Russia.

The protesters, who are angry over corruption and want Ukraine to move toward Europe rather than Russia, claimed full control of Kiev and took up positions around the president's office and a grandiose residential compound believed to be his, though he never acknowledged it.

At the sprawling suburban Kiev compound, protesters stood guard and blocked more radical elements among them from entering the building, fearing unrest. Moderate protesters have sought to prevent their comrades from looting or taking up the weapons that have filled Kiev in recent weeks.

The compound became an emblem of the secrecy and arrogance that defines Yanukovych's presidency, painting him as a leader who basks in splendor while his country's economy suffers and his opponents are jailed. An Associated Press journalist visiting the grounds Saturday saw manicured lawns, a pond, several luxurious houses and the big mansion itself, an elaborate confection of five stories with marble columns.

Protesters attached a Ukrainian flag to a lamppost at the compound, shouting: "Glory to Ukraine!"

Yanukovych left Kiev for Kharkiv, his support base in the country's Russian-speaking east, where governors, provincial officials and legislators gathered. Top Russian lawmakers joined the meeting, too, while thousands of angry protesters gathered outside chanting “Ukraine is not Russia!”

The leaders gathered in Kharkiv approved a statement calling on regional authorities to take full responsibility for the constitutional order on their territory.

Some called for forming volunteer units to protect against force by protesters from western regions. The assembly urged army units to maintain neutrality and protect ammunition depots.

Russia, the United States and the European Union are deeply worried about the future of Ukraine, a nation of 46 million whose loyalties and economy are divided between Europe and longtime ruler Moscow.

In a special parliament session, lawmakers warned that the country risks being split in two. The country's western regions want to be closer to the EU and have rejected Yanukovych's authority in many cities, while eastern Ukraine -- which accounts for the bulk of the nation's economic output -- favors closer ties with Russia.

"The people have risen up and achieved their goals. The authorities are crumbling. Victory is in sight," 31-year-old construction worker Sviatoslav Gordichenko said outside a residential compound believed to belong to Yanukovych.

Ukraine's parliament, only a day ago controlled by Yanukovych supporters, seemed to be taking control of the country's leadership.

The parliament speaker -- Yanukovych ally Volodymyr Rybak -- submitted his resignation, citing ill health. The president's representative in parliament warned against splitting the country in two, an outcome that worries many but is increasingly seeming like a possibility.

The standoff between the government and protesters escalated this week, as demonstrators clashed with police and snipers opened fire in the worst violence the country has seen since the breakup of the Soviet Union a quarter-century ago. The Health Ministry put the death toll at 77 and some opposition figures said it's even higher.