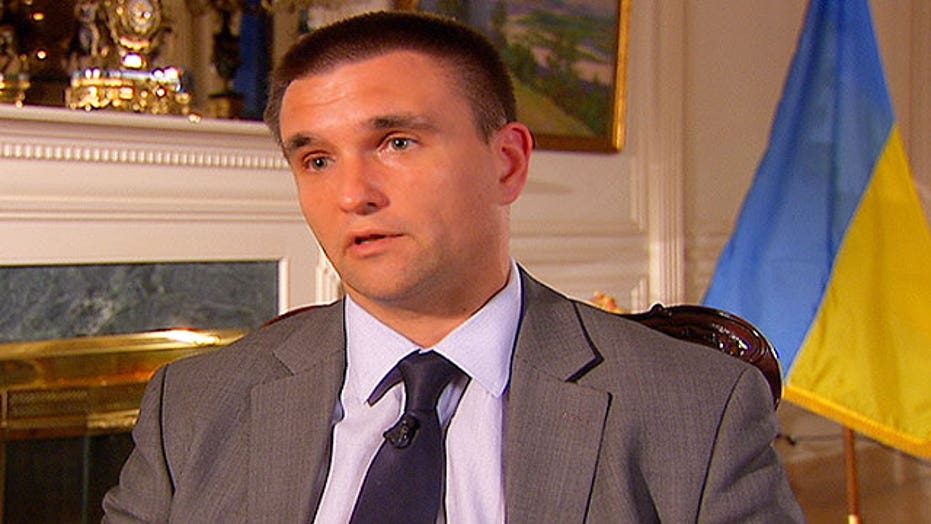 Ukraine Foreign Minister Pavlo Klimkin said Monday that the brazen Russian invasion of his country has him proposing a new "Coalition of Freedom," to defend democracy and Western values in a troubled world.

"It is about security for everyone," said Klimkin, during an exclusive Fox News interview on the eve of world leaders gathering in New York for the United Nations General Assembly. "If someone in this interchangeable and intertwined world cannot feel secure, how can U.S. citizens here feel secure?"

He says that Ukraine is confronting a threat any nation can face, adding "we need a network of security."  His proposed Coalition of Freedom would consist of "countries which are committed to freedom, to democratic values, where we are not talking about spheres of influence, but the values and real interests of democratic countries."

Klimkin said he faults the world body for failing to confront what he called Russia's invasion of Crimea, and eastern Ukraine. He also said that the West was effectively caught flat-footed by Russian President Vladimir Putin's shocking territorial conquest of parts of his country.

"I believe that NATO, the U.S. and the European Union were not ready for such developments, which have taken place around Crimea and now in Donetsk and Luhansk. Now all of us clearly understand the depths of these events."

Klimkin also is calling for "a fundamental change for the U.N.," which has been impotent in the wake of the first European invasion of another country since Adolf Hitler tested British, French and American resolve with the Nazi invasions of the 1930's.

"If you see the whole inflow of mercenaries, money, weapons and heavy weapons into Ukraine, and it's all coming across the Ukraine-Russian border, if you see the presence of Russian troops and Russian heavy weaponry on our territory, it is an act of aggression."

Despite Russia's occupation of his country, Klimkin says Ukraine has "the solidarity of the Western world."

Supporters of Ukraine in Congress are also going beyond siding with Kiev in its fight against Moscow by seeking to provide military arms the country's forces need to face the Russian backed rebels.

President Obama has so far decided to only send non-lethal supplies to the Ukrainian military. The administration is reportedly concerned that weapons shipments would only embolden Putin even further.

Ukrainian President Petro Poroshenko spoke to a joint session of Congress and met with President Obama in the Oval Office last week, but came away without a promise for arms for his besieged forces.

"They need more military equipment, both lethal and nonlethal . . . blankets, night-vision goggles are also important, but one cannot win the war with blankets," Poroshenko said.

The Ukraine government supports a Senate bill, proposed by Sen. Robert Menendez and Sen. Bob Corker, which would provide $350 million in lethal aid that the White House has so far denied.

Klimkin is confident Congress will come through.

"We are very much grateful for a number of congressmen and senators for their support and solidarity for Ukraine," he said, predicting that "such assistance will definitely be granted to Ukraine; I am absolutely sure of that."

Klimkin insists Putin can only be stopped through "a full withdrawal of Russian troops and Russian weaponry from Ukraine, and we need to close down the border."

Putin's government has denied that its forces invaded Ukraine or provided  military equipment to the rebels, a claim Western nations see as farcical. The Russian United Nations Mission did not respond to a request for comment by Fox News.

Despite the challenges facing Klimkin's country, the 47-year-old veteran diplomat is optimistic and confident about Ukraine's struggle for maintaining democracy, sovereignty and self determination.

"We are being punished for our European choice," he says. "We are in the process of the fight for freedom, for European values and for Western values, and we will definitely pull it off."