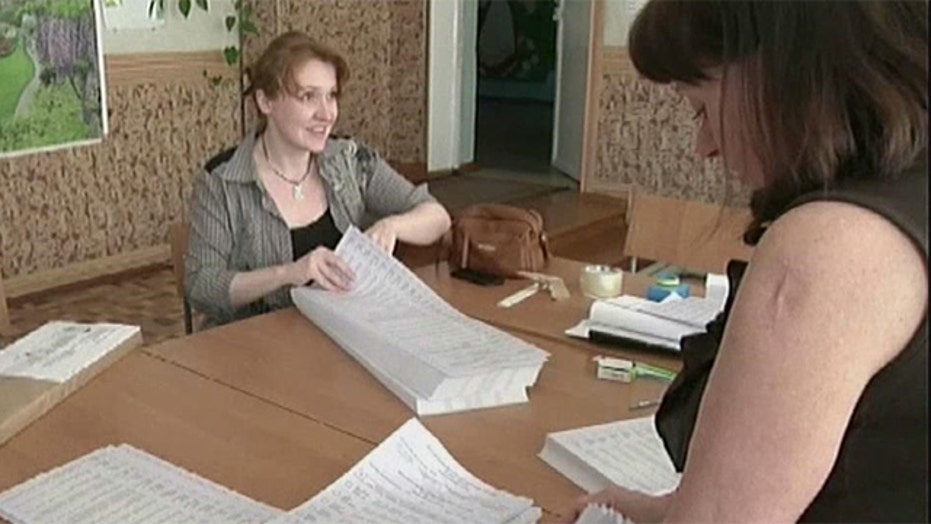 KIEV, Ukraine – Pro-Russian insurgents are likely to prevent voting Sunday in half or more of the election districts in the embattled east, Ukrainian officials say.

Deputy Interior Minister Serhiy Yarovyi said on Saturday that police are ready to ensure order and security at polling stations in just nine of the 34 districts in the east.

Earlier, Volodymyr Hrinyak, chief of the public security department at the Ukrainian Interior Ministry, said 17 out of 34 district election commissions in the Donetsk and Luhansk regions are not operating because their offices have either been seized or blocked by armed men. Hrinyak's update was reported by the Interfax news agency.

The insurgents have controlled parts of Ukraine for weeks. Following their declaration of independence earlier this month, they pledged to derail the vote which they regard as an election in "a neighboring country."

They remain defiant although Russian President Vladimir Putin said Friday that he is prepared to work with the election winner.

On Saturday, Putin again accused the West of ignoring Russia's interests in Ukraine, in particular by leaving open the possibility that the country could one day join NATO.

Acting Prime Minister Arseniy Yatsenyuk said in a televised address late Friday night that the election will be the first step to stabilize the situation in the east.

"I would like to assure all my compatriots in the Donetsk and Luhansk regions who will be prevented from going to the polling stations by the war waged on Ukraine: The criminals don't have much time left to terrorize our land," Yatsenyuk said.

Leaders of various Christian churches as well as Muslim leaders gathered at Kiev's main cathedral, the St. Sophia Cathedral, for a pray for peace and free and fair election in Ukraine. Ukraine's interim president, prime minister, cabinet ministers as well as lawmakers took part in prayers at the cathedral that dates back to the 11th century.

Filaret, patriarch of the Ukrainian Orthodox church, said all churches in Ukraine on Saturday would be praying for peace because "Ukraine suffers from aggression of its neighbor to the north, Russia."

Twenty-one candidates are competing to become Ukraine's next leader. Polls show billionaire candy-maker Petro Poroshenko with a commanding lead, but short of the absolute majority needed to win in the first round. His nearest challenger is Yulia Tymoshenko, the divisive former prime minister who is far behind.

Most polls suggest Poroshenko would win a runoff ballot, which would be held on June 15.

Fighting was reported Friday between pro-Russia separatists and government forces in eastern Ukraine as Kiev continued an offensive to try to halt the uprising.