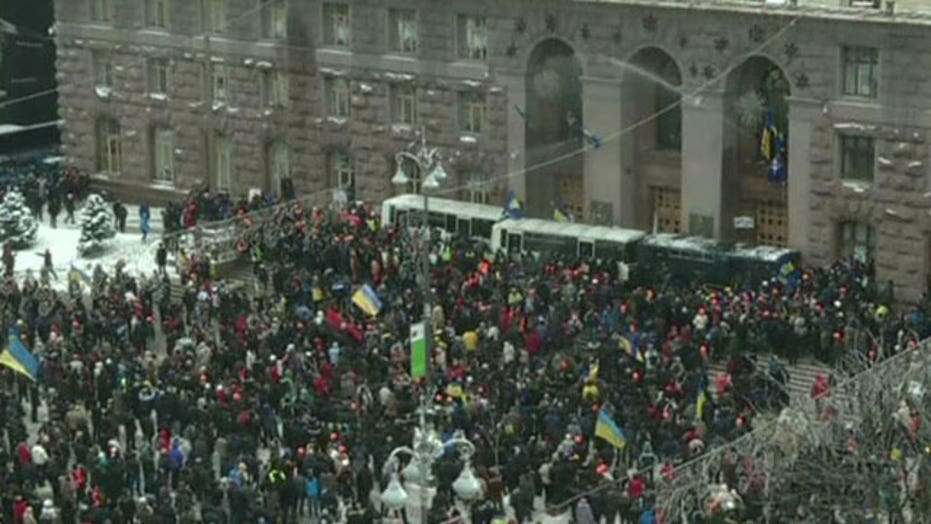 International impact of unrest in Ukraine

Several thousand police in riot gear pulled back after clashing with protesters in the central square of the Ukrainian capital Wednesday following overnight confrontations in which authorities dismantled barricades and evicted demonstrators from tents.

Squadrons of police in helmets and bearing metal shields converged at about 1 a.m. on Independence Square in Kiev on Wednesday, but thousands of protesters put up fierce resistance for hours, shoving back at police lines to keep them away from key sites.

The Ukrainian chief of police issued a statement insisting there would be no attempt to break up the demonstrations. Protesters have been gathering around the clock to demand the resignation of the government in a crisis that threatens the leadership of President Viktor Yanukovych.

The White House said Wednesday afternoon that the use of force against Ukrainian protesters is completely unacceptable.

Spokesman Josh Earnest says the U.S. was appalled by recent clashes in Kiev. He called on Yanukovych to respect his people's right to protest and assemble.

The protests began in late November when Yanukovych backed away from a pact that would deepen the former Soviet republic's economic ties with the 28-nation European Union — a pact that surveys showed was supported by nearly half the country's people.

"I want to calm everyone down — there will be no dispersal," Interior Minister Vitaly Zakharchenko said on the ministry's website. "No one is encroaching on the rights of citizens to peaceful protest."

Three police buses that had been parked outside the building all night drove away to cheers and shouts of "shame!" from several thousand protesters who remained on the square. Another group of police that had been stationed outside the Kiev city hall building, which has been occupied by protesters for weeks, also departed.

"This is a great victory," Arseniy Yatsenyuk, a top opposition leader, shouted from the stage at Independence Square.

Throughout the standoff the police appeared to be under orders to refrain from excessive force, unlike the violent beatings of protesters in recent weeks. Several demonstrators and police were injured, but police helped injured activists up from the ground and moved them away.

But police violence has become one of the main catalysts for the growing protest movement and the government has appeared to back off from heavy-handed police tactics.

Many of the protesters, wearing orange construction hats to protect themselves from police truncheons, locked arms and simultaneously jumped up and down to stay warm in freezing temperatures that plunged to 12 degrees Fahrenheit (minus 11 Celsius).

Scuffles broke out between police and opposition lawmakers Wednesday, one of whom lay down on the snow trying to block a vehicle from advancing on the camp. An Orthodox priest sang prayers, and a popular Ukrainian rock song with the lyrics "I will not give up without a fight" blared from loudspeakers over the square. Pop singer Ruslana sang the national anthem and cheered protesters from the stage.

One protester stripped to his waist in the frigid air, got down on his knees and shouted "Stop this ... We are one people!"

At least one tent caught fire after a metal barrel where a fire was burning to keep demonstrators warm overturned.

Kiev police said authorities were merely trying to clear the streets leading to Independence Square, but not to remove the main encampment, the Ukrainian Interfax news agency reported.

Meanwhile, scores of protesters remained barricaded inside the Kiev city hall building, which they had been occupying for weeks. They hosed down the steps leading to the entrance with water so police would slip on the ice.

"We want to cool Yanukovych down a little bit," said 35-year-old Oleg Stri, who was among those throwing water. "Hotheads have to understand that the use of force will call for an equally strong reaction from the Ukrainians, who are capable of sweeping away this government."

A group of police that had been stationed outside the building departed from the scene early Wednesday.

The confrontations unfolded as EU foreign policy chief Catherine Ashton and U.S. Assistant Secretary of State Victoria Nuland were in the city to try to talk to the government and the opposition and work out a solution.

Nuland visited Independence Square on Wednesday and talked to protesters, an opposition leader told Reuters. Her visit was confirmed to the news agency by the U.S. embassy.

Western officials also issued strong statements about the crackdown on the protests. U.S. Secretary of State John Kerry expressed U.S. "disgust with the decision of Ukrainian authorities to meet the peaceful protest ... with riot police, bulldozers, and batons, rather than with respect for democratic rights and human dignity."

"The United States stands with the people of Ukraine. They deserve better," he said.

Opposition leader Vitali Klitschko, who is a reigning world heavyweight boxing champion, urged Ukrainians to rush to the center of the capital to defend democracy.

"We will say no to a police state, no to a dictatorship," he told protesters in the square.

The protests are the biggest since Ukraine's pro-democracy Orange Revolution. Those protests, also centered on Independence Square, succeeded in forcing the annulment of Yanukovych's fraud-tainted presidential victory in 2004, and ushered his pro-Western opponents into power. Yanukovych returned to the presidency in the 2010 vote, drawing on support from heavily industrialized eastern Ukraine where there are many Russian speakers.

Aiming to defuse the latest crisis, Yanukovych had called earlier Tuesday for the release of the demonstrators previously arrested in the protests and vowed that Ukraine is still interested in integrating with Europe.

Yatsenyuk told demonstrators at the square that the protest leaders were still insisting on their key demands: that Yanukovych dismiss the government, appoint a new one committed to signing an association agreement with the EU, release all the arrested protesters, and punish police who beat peaceful demonstrators.

Yanukovych also vowed to renew talks with the EU on the trade and political agreement. He indicated he was still willing to sign the EU deal at a summit in spring, but only if the EU can offer better financial terms. He said at present, the EU agreement could cost economically struggling Ukraine billions in lost trade with Russia, which has used trade threats to try to keep Ukraine in its orbit.

"We want to achieve conditions that satisfy Ukraine, Ukrainian producers, the Ukrainian people," Yanukovych said in the televised meeting. "If we find understanding and if such compromises are reached, the signature will be put" on paper.

The EU's enlargement commissioner, Stefan Fule, said Tuesday the bloc was ready to step "up the European Union's financial assistance programs to help Ukraine implement the agreement, when signed."

Ukraine's dire economic straits have also been a factor in its political crisis. The country of 46 million people has been in recession for more than a year, and the government is in desperate need of foreign funding to avoid a default.