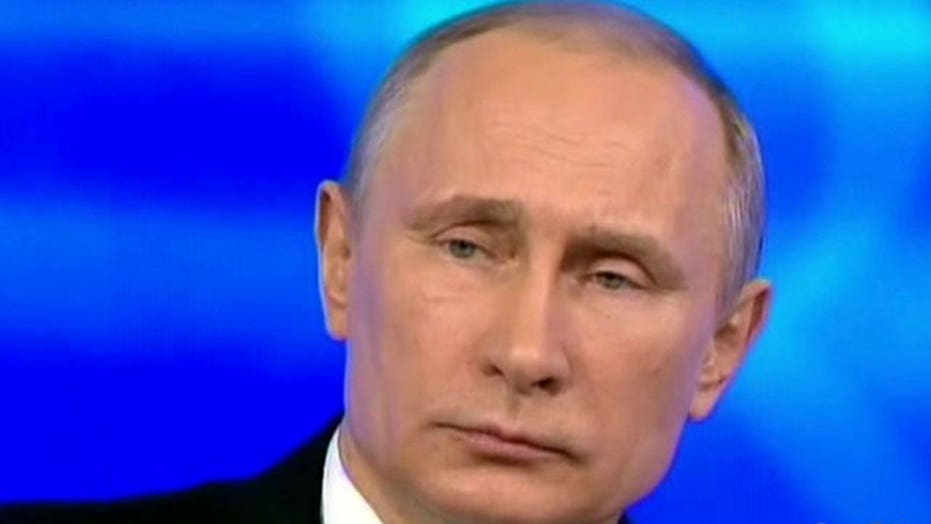 DONETSK, Ukraine – Ukraine's acting president ordered security forces to resume "anti-terror" operations in the country's east Tuesday after the bodies of two people allegedly abducted by pro-Russia insurgents were found and a military aircraft was reported to be hit by gunfire.

The agreement calls for all sides to refrain from violence and for demonstrators to vacate public buildings. It does not specifically prohibit security operations, but Ukraine suspended its so-called "anti-terrorist operation" after the accord.

Pro-Russia insurgents who have seized police stations and other public buildings in eastern Ukraine are defying the call to vacate, saying they were not party to the agreement by Ukraine, Russia, the United States and the European Union.

In a statement, acting President Oleksandr Turchynov said the two bodies found Tuesday in Slovyansk bore signs of torture. One of them was a member of the city council and a member of Turchynov's party, he said.

Terrorists "are beginning to torture and kill Ukrainian patriots. They are impudently rejecting the calls of not only our country but of all the world's society when they demonstratively mock the decisions taken in Geneva," he said.

"These crimes are being done with the full support and connivance of Russia," Turchynov added.

The acting government, which took over after President Viktor Yanukovych fled to Russia in February, says Russia is behind the outbreak of unrest in eastern Ukraine with the possible aim of provoking violence that could be used as a pretext to invade. Last month, Russia annexed Crimea several weeks after seizing control of the peninsula.

The Defense Ministry said gunfire hit an observation plane over Slovyansk but the aircraft landed safely without injuries.

Biden said Russia needs to act "without delay," adding, "We will not allow this to become an open-ended process."

Yatsenyuk was harsher in his characterization of Russia.

"No country should be able to behave like an armed bandit," he said. "Russia should stick to its international commitments and obligations. They should not behave as gangsters in the modern century."

The U.S. has warned that it will quickly order new economic sanctions on Russian officials and entities if Moscow doesn't follow through on the provisions in last week's accord.

Moscow has rejected charges that it was behind the troubles in eastern Ukraine and that it has failed to live up to the Geneva agreement. Officials there have decried "ultimatums" from the West.

"Before putting forth ultimatums to us, demanding fulfillment of something within two-three days or otherwise be threatened with sanctions, we would urgently call on our American partners to fully recognize responsibility for those whom they brought to power and whom they are trying to shield, closing their eyes to the outrages created by this regime and by the fighters on whom this regime leans," Russia's Foreign Minister Sergey Lavrov said.

The money includes $11 million to help conduct the May 25 presidential election, including voter education, administration and oversight. It also will help fund expert teams from U.S. government agencies to help Ukraine to reduce its reliance on energy supplies from Russia. Other technical advisers will help fight corruption.

In the most high-level visit of a U.S. official to Ukraine since the crisis erupted, Biden met privately with Yatsenyuk and Turchynov, as well as with democracy activists.

"I know the men and women who hide behind masks and unmarked uniforms, they do not speak for you," Biden said. "All are welcome as equals in shaping a new Ukraine. We count on you to be the voice for rights and freedoms."

Biden paid tribute to the protest movement by visiting St. Michael's Golden-Domed Monastery, perched on a hill a few blocks from Kiev's Independence Square that was the site of massive demonstrations against then-President Viktor Yanukovych. The monks provided refuge to protesters fleeing riot police and served as a field hospital to treat demonstrators who were shot in the square. Some died from their wounds beneath the monastery's high, blue bell tower.

"These heroes remind us of the true cost of a better future and the nobility of those who reach for it," Biden said.

Earlier, he told leaders from various political parties that he brings a message of support from President Barack Obama as they face a historic opportunity to usher in reforms.

"The opportunity to generate a united Ukraine, getting it right, is within your grasp," Biden said. "And we want to be your partner, your friend in the project.  And we're ready to assist."

Biden spoke to nine Ukrainians in a room with gilded moldings at the parliament, or Rada, as the media looked on. The group included three candidates running for president in the May 25 election -- most notably billionaire chocolate magnate and front-runner Petro Poroshenko.  Biden told them he hopes that they have more luck than he did in two presidential runs.