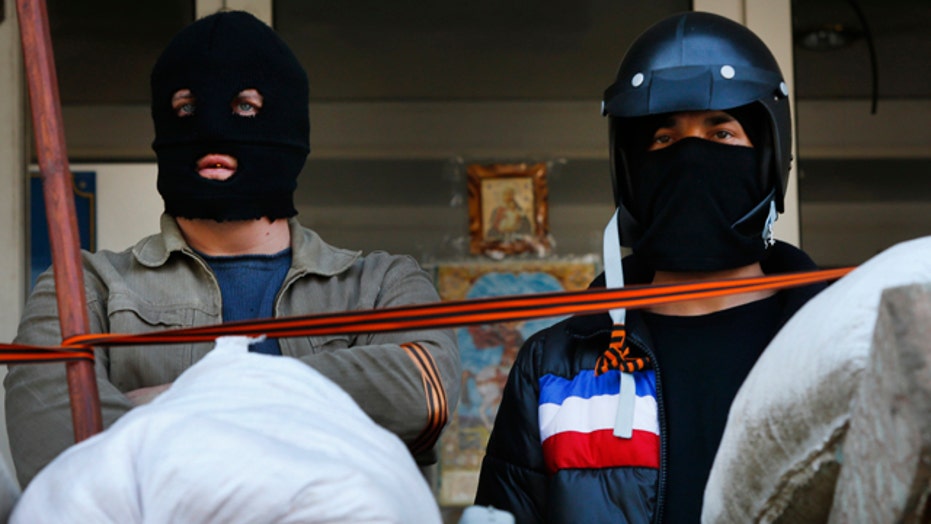 Does deal to calm crisis in Ukraine hold any weight?

Reaction to agreement struck by Secretary Kerry and diplomats

Ukraine and Russia agreed in Geneva to take tentative steps toward calming tensions along their shared border after weeks of conflict since Ukraine's former leader fled to Russia in February and Russia annexed Crimea in March.

The deal -- brokered by the United States, Russia, Ukraine and the European Union-- calls for disarming all paramilitary groups and the immediate return of all government buildings seized across the country.

But Denis Pushilin—a leader of the self-appointed Donetsk People's Republic-- told reporters Friday that the separatists do not recognize the Ukrainian government as legitimate.

"This is a reasonable agreement but everyone should vacate the buildings and that includes (Arseniy) Yatsenyuk and (Oleksandr) Turchynov," Pushilin said, referring to the acting Ukrainian prime minister and president.

A statement from Ukraine's acting president and prime minister says the government is ready to carry out "comprehensive constitutional reform" giving Ukraine's regions a greater say in local governance.

It's also pledging to give "special status to the Russian language" and protect the rights of all citizens, whatever language they speak.

The prime minister told parliament today that the government has drafted a law to offer amnesty to all those willing to lay down their arms and leave the occupied government buildings.

Ukraine has scheduled a presidential election for May 25, but Pushilin reiterated a call to hold a referendum on self-determination for the Donetsk region by May 11. Such a referendum in Crimea led to its annexation by Russia.

Ukraine has faced months of turmoil, first in Kiev by protesters angry that former President Viktor Yanukovych wanted closer ties with Russia instead of Europe, then in eastern Ukraine by pro-Russian supporters. Now many of the buildings in the east occupied by the tacitly Moscow-supported insurgents are in the hands of highly trained gunmen, a situation that has complicated authorities' plans to retake them.

Pushilin said the insurgents would not hand over their weapons until the government halts efforts to reclaim the occupied buildings.

"As far disarmament goes, the Kiev junta has already begun violating its agreements since yesterday, by announcing that it will not pull its troops out of Slovyansk and Kramatorsk," Pushilin said, referring to two cities occupied by the insurgency.

In Slaviansk, where men with Kalashnikovs took control last weekend, pro-Russian group leaders met inside one of the seized buildings to decide how to respond to the Geneva agreement.

Anatoly-- an armed rebel who helped seize police headquarters in Slaviansk-- said he’s not going anywhere. ``We are not leaving the building, regardless of what statements are made, because we know what is the real situation in the country and we will not leave until our commander tells us to.''

Despite announcing a security operation with great fanfare, the government in Kiev has taken few practical measures to reclaim its buildings. Prime Minister Arseniy Yatsenyuk told parliament Friday the government has drafted a law to offer amnesty to all those willing to lay down their arms and leave the occupied government buildings.

Russia has declined to recognize the legitimacy of Ukraine's interim government but it has not said they should vacate their offices.

In Washington, President Barack Obama conveyed skepticism late Thursday about Russian promises to de-escalate the volatile situation in Ukraine, and said the United State and its allies were ready to impose more sanctions if Moscow doesn't make good on its commitments.

Meanwhile, former prime minister and presidential hopeful Yulia Tymoshenko arrived Friday in Donetsk in a bid to defuse the tensions and hear "the demands of Ukrainians who live in Donetsk."

"I'd like to listen to these demands by myself and find out how serious they are, so that one could find the necessary compromise between the east and the west that will allow us to unite the country," she told The Associated Press.

Ukraine's government has promised to devolve power to the regions and protect the rights of its citizens to use the Russian language in public life. But it rejects calls for a federal structure that it says could lead to permanent Russian interference in the east and eventually break up the country.