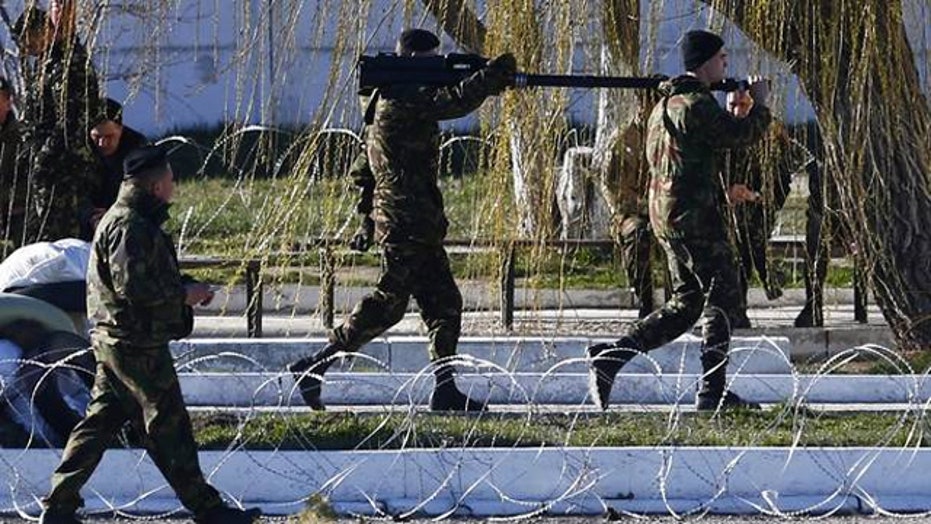 Is Russia preparing for a full invasion of Ukraine?

Four hours of talks between Secretary of State John Kerry and his Russian counterpart failed to break a tense East-West deadlock over how to proceed on the Ukraine crisis, though the two men agreed the situation requires a diplomatic solution.

The talks came hours after a leading Ukrainian military analyst told Fox News there are now about 50,000 Russian troops within several hours of the two nations' border, but there has been a "general decrease in tensions" since Russian President Vladimir Putin called President Obama on Friday.

Sitting face-to-face but not seeing eye-to-eye on any of the most critical issues, Kerry and Russian Foreign Minister Sergey Lavrov advanced far different proposals on how to calm tensions and de-escalate the situation, particularly as Russia continues to mass troops along its border with the former Soviet republic. As he called for Moscow to begin an immediate pullback of the troops, Kerry also ruled out discussion of Russia's demand for Ukraine to become a loose federation until-and-unless Ukrainians are at the table.

"The Russian troop buildup is creating a climate of fear and intimidation in Ukraine," Kerry told reporters at the home of the U.S. ambassador to France after the meeting, which was held at the Russian ambassador's residence and included a working dinner. "It certainly does not create the climate that we need for dialogue."

The U.S. believes the massing of tens of thousands of Russian soldiers, ostensibly for military exercises, along the border is at once an attempt to intimidate Ukraine's new leaders after Russia's annexation of the strategic Crimean peninsula and to use a bargaining chip with the United States and the European Union, which have condemned Crimea's absorption into Russia and imposed sanctions on senior Russian officials.

Kerry noted that even if the troops remain on Russian soil and do not enter Ukraine, they create a negative atmosphere.

"The question is not one of right or legality," he said. "The question is one of strategic appropriateness and whether it's smart at this moment of time to have troops massed on the border."

Of the 50,000 troops, about 10,000 are located directly at the border, but Ukrainian military analyst Dmitry Tymchuk told Fox News on Sunday he has seen some "pull-back and regrouping" of these soldiers, lessening the immediate chances of a full-scale Russian invasion.

Russia says the troops near the border are there for military exercises and that they have no plans to invade, but U.S. and European officials say the numbers and locations of the troops suggest something more than exercises.

And, despite the Russian assurances, U.S., European and Ukrainian officials are deeply concerned about the buildup, which they fear could be a prelude to an invasion or intimidation to compel Kiev to accept Moscow's demands.

U.S. officials said Kerry proposed a number of ideas on troop withdrawals from the border and that Lavrov, while making no promises, told him he would present the proposals to the Kremlin.

At a separate news conference at the Russian ambassador's house, Lavrov did not address the troop issue. Instead, he made the case for Moscow's idea of Ukraine as a federalized nation with its various regions enjoying major autonomy from the government in Kiev. Russia says it is particularly concerned about the treatment of ethnic Russians and Russian speakers who live in southern and eastern Ukraine.

Lavrov said that Ukraine can't function as a "unified state" and should be a loose federation of regions that are each allowed to choose their own economic, financial, social, linguistic and religious models.

He said every time Ukraine has elected a new president, the country has adopted a new constitution, proving that "the model of a unified state doesn't work."

Ukrainian officials are wary of decentralizing power, fearing that pro-Russia regions would hamper its Western aspirations and potentially split the country apart. However, they are exploring political reforms that could grant more authority to local governments.

The U.S. has been coy about their position on a federation. Washington has encouraged ongoing political and constitutional reform efforts that the government in Kiev is now working on but U.S. officials insist that any changes to Ukraine's governing structure must be acceptable to the Ukrainians.

Kerry said the federation idea had not been discussed in any serious way during his meeting with Lavrov "because it would have been inappropriate to do so without Ukrainian input."

"It is not up to us to make any decision or agreement regarding federalization," he said. "It is up to Ukrainians."

"We will not accept a path forward where the legitimate government of Ukraine is not at the table," Kerry said, adding that the bottom line is: "No decisions about Ukraine without Ukraine."

"Federation does not mean, as some in Kiev fear, an attempt to split Ukraine," he said. "To the contrary, federation ... answers the interests of all regions of Ukraine."

Lavrov said he and Kerry did agree to work with the Ukrainian government to improve rights for Russian-speaking Ukrainians and disarm "irregular forces and provocateurs."

The Wall Street Journal reported Sunday that U.S. officials have been divided over whether Putin's call was indicative of a genuine desire to ease tensions between East and West or a pretext for further military action in Eastern Europe.

White House officials described the call as "frank and direct" and said Obama had urged Putin to offer a written response to a diplomatic resolution to the Ukraine crisis that the U.S. has presented. Obama also urged Moscow to scale back its troop build-up on the border with Ukraine, which has prompted concerns in Kiev and Washington about a possible Russian invasion in eastern Ukraine.

The Kremlin, on the other hand, said Putin had drawn Obama's attention to a "rampage of extremists" in Ukraine and suggested "possible steps by the international community to help stabilize the situation" in Ukraine.

Kerry has repeatedly met with Lavrov over the past month in attempts to halt Russia's annexation of Crimea. However, those talks have proven fruitless, and U.S. officials tell the Journal that Putin is likely to demand that the U.S. accept Russia's annexation of the Black Sea peninsula earlier this month as the minimum necessary for any cooperation between the two nations.

In previous meetings, Mr. Kerry has outlined to Mr. Lavrov a common approach to resolving the Ukraine crisis, U.S. officials told the Journal. This included joint initiatives to stabilize Kiev's economy, promote the decentralization of the country's political system and demobilize pro-Russian and pro-Ukrainian paramilitaries that have blossomed across the country in recent months. However, those proposed initiatives have been contingent on the unlikely event of Russia pulling back from Crimea.

White House officials described the call as "frank and direct" and said Obama had urged Putin to offer a written response to a diplomatic resolution to the Ukraine crisis that the U.S. has presented. Obama also urged Moscow to scale back its troop build-up on the border with Ukraine, which has prompted concerns in Kiev and Washington about a possible Russian invasion in eastern Ukraine.

The Kremlin, on the other hand, said Putin had drawn Obama's attention to a "rampage of extremists" in Ukraine and suggested "possible steps by the international community to help stabilize the situation" in Ukraine.