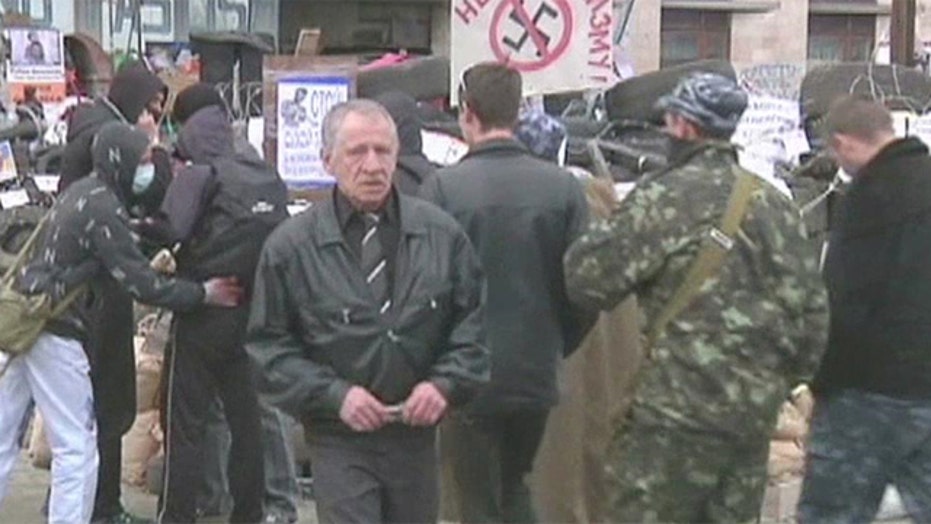 Ukraine's interim government says it has proof that Russian military and intelligence forces are fomenting the unrest that has destabilized the eastern part of that country since Russia's annexation of Crimea last month.

The New York Times reports that photos and descriptions circulated by the Kiev government show that some of the so-called "green men" -- gunmen who have seized government buildings and demanded Crimea-style referenda on becoming part of Russia -- have been identified in other photos as being among Russian troops.

The Times also reports that one of the men in the photos has been identified as Igor Ivanovich Strelkov, a veteran Russian military and intelligence operative. Strelkov is believed to have served Russia undercover both in Crimea and in the city of Slovyansk, one of the centers of the most recent unrest.

Last week, Ukrainian authorities released a wanted poster for Mr. Strelkov, accompanied by a pencil sketch of his gaunt face. "What, they can't even get a proper photo of him?" one of the men behind the sandbagged entrance to the city council of Slovyansk over the weekend, who referred to himself simply as Daisy, told a Wall Street Journal reporter. When asked about the role of Russian intelligence, the man declined to answer and told a reporter to leave immediately.

The Obama administration has endorsed the claims of the Ukrainians, saying that Russia could face new economic sanctions if government buildings currently occupied by demonstrators are not vacated under the terms of an agreement reached Thursday among Russian, Ukrainian, American and European diplomats. Vice President Joe Biden is scheduled to arrive in Ukraine Monday morning to meet with Ukraine's interim prime minister and president, as well as other officials.

Russian officials, including President Vladimir Putin, have repeatedly denied that Russian forces are involved in the unrest, which began after the February deposition of pro-Russian Ukrainian President Viktor Yanukovych. That message is backed up by the separatists themselves, who claim that their movement is entirely homegrown and in response to what they consider an illegal coup that resulted in Yanukovych's downfall.

The unit accused of operating in eastern Ukraine is known as the GRU, the Russian acronym for the Main Intelligence Department of the Russian General Staff. It is an elite Russian military intelligence unit that has participated in virtually every military conflict in which Moscow has been embroiled in recent decades, including wars in Afghanistan, Chechnya and Georgia.

In eastern Ukraine, Ukraine's State Security Service alleges the Russian operatives' task is to coordinate pro-Russian militias, help them identify targets and carry out seizures of key installations, such as police and security headquarters, government offices and communications infrastructure.

Ukrainian security officials say Russian intelligence has spent years building up a network of sleeper agents in eastern Ukraine. One of them, they say, is Igor Bezler, a 49-year-old Crimean native who they say served in the GRU until 2002, when he moved to the eastern city of Horlivka. There, he worked as a security guard and as head of a funeral company.

Then, last week, after a pro-Russian mob took over the town's police station, a video posted on a local news organization's website showed him parading in fatigues in front of a couple dozen local police, identifying himself as a lieutenant colonel in the Russian army and telling them they had a new chief. Ukrainian officials allege he was tasked earlier this month with seizing state-security buildings in Donetsk region, then taking the police station in Horlivka.

"The fact that the Russians have woken up these networks is evidence that we're dealing with a serious operation, not a game," a senior Ukrainian security official told the Journal. Now, Mr. Bezler is occupying the police station with a group of armed men, officials say. According to local police, Mr. Bezler told them he had an order "from the center in Slovyansk" to hold the building at any cost and had sufficient force to do so.

The separatists' endgame is unclear. Some talk of federalization within Ukraine; others want independence; yet others dream of a Crimea scenario, energized by Russian President Vladimir Putin's recent mention of Novorossiya (literally, New Russia), a tsarist-era imperial term for what is now southeastern Ukraine. Moscow's goals have also been unclear in comparison to the Crimea campaign, in which Moscow rapidly annexed the peninsula.