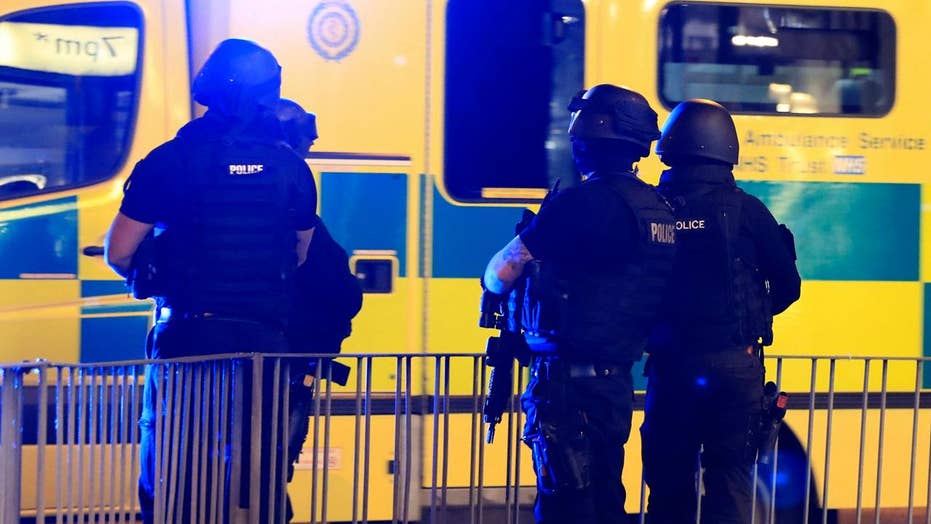 In the wake of the latest terror attack in Manchester, Great Britain, in which a suicide bomber detonated himself at the Ariana Grande concert, killing 22 people, a look back at some of the recent acts of terrorism across Europe

British Prime Minister Theresa May said she would chair a meeting of the government's emergency committee in response to Friday's subway fire in London that police have called a terrorist incident.

The blast occurred on a tube train at Parsons Green station. At least 22 people were being treated for injuries following the fire.

So what does that mean?

The threat levels in the UK listed below are designed to give a broad indication of the likelihood of a terrorist attack, according to MI5.

?         SUBSTANTIAL means an attack is a strong possibility

Threat levels from international terrorism in the UK are set by the Joint Terrorism Analysis Center, part of MI5, which works with U.S. military intelligence and the Defense Intelligence Agency. MI5 is responsible for setting the threat levels from Irish and other domestic terrorism.

What changes with a critical threat level?

With the increase of the threat level to critical, police have 3,800 more soldiers on call as well as additional equipment for “as long as we need them,” UK Home Secretary Amber Rudd told the BBC.

POLICE INVESTIGATING NETWORK OF SUSPECTS IN MANCHESTER ATTACK, 4 IN CUSTODY

In a statement announcing the change in threat levels, May announced that armed soldiers would replace police officers at “key sites.” Police presence will also be strengthened on patrol in additional areas.

Military personnel are also expected to guard events such as concerts and sports, May said.

“In the coming days and weeks, there will of course be many events hosted up and down the country,” May said. “The police will work with the organizers and hosts of these events, to come to a judgment about how they can go ahead while making sure the people who attend them are safe and secure.”

“We will take every measure available to us and provide every additional resource we can to the police and the security services as they work to protect the public,” she added.

How are threat levels determined?

Several factors need to be taken into account before reaching a judgement on the appropriate threat level, according to MI5.

?         Available intelligence: "Judgements about the threat will be based on a wide range of information, which is often fragmentary, including the level and nature of current terrorist activity, comparison with events in other countries and previous attacks. Intelligence is only ever likely to reveal part of the picture."

?         Terrorist capability: "An examination of what is known about the capabilities of the terrorists in question and the method they may use based on previous attacks or from intelligence. This would also analyze the potential scale of the attack."

?         Terrorist intentions: "Using intelligence and publicly available information to examine the overall aims of the terrorists and the ways they may achieve them including what sort of targets they would consider attacking."

?         Timescale: "The threat level expresses the likelihood of an attack in the near term. We know from past incidents that some attacks take years to plan, while others are put together more quickly. In the absence of specific intelligence, a judgement will need to be made about how close an attack might be to fruition. Threat levels do not have any set expiry date, but are regularly subject to review in order to ensure that they remain current.”

Has the UK raised its terror level so high before?

The last time the UK’s threat level was raised to the highest bar was in June 2007 after authorities uncovered a plot to bomb a popular nightclub. It was also raised to critical for three days in August 2006 as the transatlantic airline plot was uncovered.

The international terror threat level scale was only made public in the UK in August 2006, according to the BBC.

What is the response to a critical terror level?

Specific threat levels do not actually require particular actions from the public, according to the MI5 website.

The website also encourages the public to utilize its Anti-Terrorist Hotline to provide tips and confidential information.

ROBERT GATES: MANCHESTER ATTACK IS 'HARBINGER' OF MORE ATTACKS IN THE WEST

“I do not want the public to feel unduly alarmed,” May said when announcing the threat level change. “We have faced a serious terrorist threat in our country for many years."