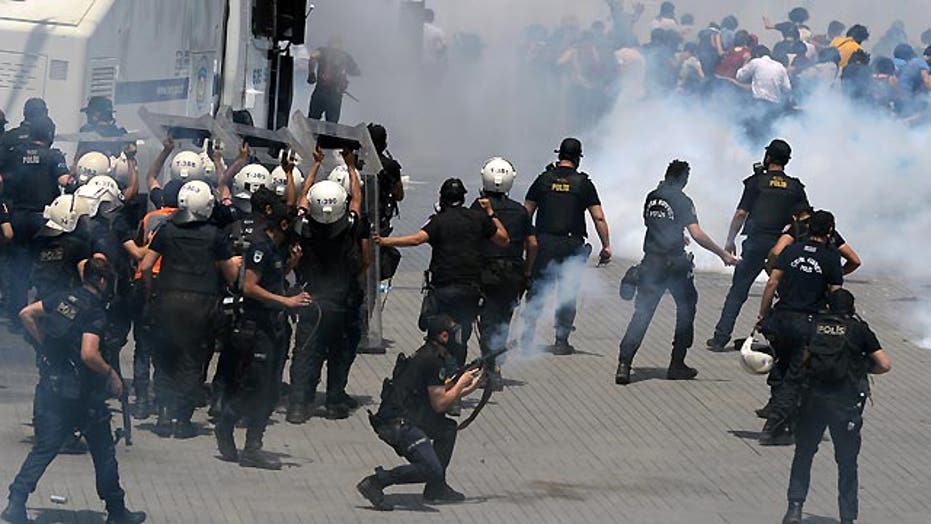 ISTANBUL – In a scene reminiscent of the Arab Spring, thousands of people on Saturday flooded Istanbul's main square after a crackdown on an anti-government protest turned city streets into a battlefield clouded by tear gas.

Though he offered some concessions to demonstrators, Prime Minister Recep Tayyip Erdogan remained largely defiant in the face of the biggest popular challenge to his power in a decade in office, insisting the protests are undemocratic and illegitimate.

Public anger has flared among urban and secular Turks after police violently broke up an anti-development sit-in in the square, with protests spreading to other cities as demonstrators denounced what they see as Erdogan's increasingly authoritarian style.

As the furious protests entered its second day, police fired tear gas and turned on water cannons at angry demonstrators, some of whom threw rocks and bottles on their march toward the city's landmark Taksim Square. In an area normally abuzz with tourists, stores were shuttered and protesters fled into luxury hotels for shelter.

Turkish authorities later removed barricades and allowed thousands of demonstrators into the square in an effort to calm tension. Sounding defiant even as he pulled back police, Erdogan promised to stick to the government's redevelopment plans -- which protesters fear will remove one of the few green spaces in the sprawling city.

He called the protesters a "minority" that was trying to forcefully impose demands and challenged the opposition that he could easily summon a million people for a government rally.

Under Erdogan's leadership, Turkey has boosted economic growth and raised its international profile, taking a central role in post-Arab Spring politics in the region. Though widely supported by rural and conservative religious Muslims, he remains a divisive figure in mainly secular circles and is criticized for his often abrasive style.

Private NTV television reported that protesters built barricades at entrances to the square to prevent police from returning.

Sporadic clashes continued between police and a group of protesters who were trying to approach Erdogan's office in Istanbul, which is located at a former Ottoman palace. The Dogan news agency said the protesters had set an abandoned police vehicle on fire.

Although scenes at the square brought to mind Cairo's Tahrir Square, the center of an uprising that ended Egyptian President Hosni Mubarek's rule, the protests were not likely bring down Erdogan's government, one analyst said.

The protests were more of a warning, according to Ahmet Cigdem, a professor of sociology and political science at Ankara's Gazi University.

"The people showed that the government's rule is not guaranteed just because they obtained some 50 percent of the votes and just because there is no powerful political opposition in Turkey," Cigdem said.

"These protests have clearly showed what the people reject. They are saying `Don't force your political, sociological and cultural impositions on our lives. Don't try to shape my thoughts and my beliefs," he said.

In a surprise move last week, the government quickly passed legislation curbing the sale and advertising of alcoholic drinks, alarming secularists. Many felt insulted when he defended the legislation by calling people who drink "alcoholics." He insists the new regulations are aimed at protecting Turkey's youth from the harms of alcohol.

Erdogan is frequently criticized as a meddler in all aspects of life, telling couples, for example, to bear a minimum of three children. He also berated producers of a popular television series on the life of Ottoman Sultan Suleyman the Magnificient for depicting him as a figure who spends his time dwelling on issues concerning his harem instead of fighting wars.

The government's policy on Syria also remains unpopular, with many believing its open support to rebels fighting Syrian President Bashar Assad's regime has put Turkey's security at risk. On May 11, twin car bombs at a border town the government blamed on Syria killed 52 and sparked anti-government protests.

At dawn on Saturday, police violently rousted protesters who had camped out at Taksim to protest the planned removal of trees in the square. Officials are planning to rebuild a former Ottoman army barracks and put in a shopping mall.

"We can hardly believe that a small action caused by a tree or two has led to such an uprising," demonstrator Hande Topaloglu said.

The protest was also seen as a demonstration of the anger building toward Turkish police, who have been accused of using inordinate force to quash demonstrations and of using tear gas excessively.

In another gesture to placate protesters, Erdogan said that police may have used tear gas excessively. The Interior Ministry said police officers who abused their power would be punished.

As police retreated from Taksim, some protesters hurled objects at officers and police vehicles, prompting police to fire several rounds of tear gas. Police also withdrew from a protest in Ankara, the capital.

Erdogan said the government was determined to revamp Taksim and rebuild the old army barracks but said no firm decision was made on building a shopping mall. He also spoke of government plans to tear down a cultural center to build an opera hall, in statements that could cause further controversy.

Earlier, a few thousand people marched along the Bosporus Bridge from the Asian shore of the city, toward Taksim, on the European side, but were met with pressurized water and tear gas that filled the air in a thick cloud.

The protests broke out just days after Istanbul pitched its bid to host the 2020 Olympic games to sports and Olympic officials at a conference in St. Petersburg.

The United States, Britain and Sweden were among countries that asked citizens to stay away from areas where protests were held.

In Syria, Information Minister Omran al-Zoubi said Erdogan's suppression of the peaceful protests in Turkey a day earlier was "illogical and reveals his detachment from reality."

Echoing words that Erdogan has used against Syrian leader Assad, Al-Zoubi said it is unjustified that Erdogan should defy his people.

Al-Zoubi said if Erdogan is incapable of using nonviolent means to subdue the protests, he has to step down.